When a grown daughter asks her mom to go shopping…it’s real nice.

When a grown daughter asks her mom to go shopping and adds “bring the farm truck”…that’s when you know some serious shopping is about to take place.

WHY?  You may ask…do you need a truck to do serious shopping? Well…you see…my family spends far more money in barns that we ever, ever will spend at any mall!

Last week, Toughchick noticed an ad in the local Craigslist for some goats, but she thought the price was too high.  Apparently the seller got a little anxious because he nearly halved the price after just a couple of days…and well…you know what happened next.  Yep, we were headed on an expedition that was going to involve a little goat hauling.

I should interject here that Toughchick and her husband have a little homestead over in the Draft.  Their menagerie includes chickens and a couple of goats, bunches of quail and a pair of ducks.  (I love that the ducks are named Wilma and Gunther.)  There are also two dogs and a cat.  All the poultry is raised for either show or sale.  And, they’ve been selling hatching eggs on Ebay for years.  (pretty cool, huh?)

Back to the story.

Since the racks were still on the dodge from our lamb hauling earlier in the week, it was just a matter of hopping in the truck after lunch and heading out in search of the “goat farm”.  I made sure my MP3 player was fully charged and cranked up loudly, too.  The MP3 player is critical when driving the farm truck. (to my mind, anyway)  A ’95 model, the truck has more than one rather geriatric issue.  The dashboard is cracked and it moans and groans on occasion. The radio doesn’t work worth a lick. The truck has a couple of weird whines and clunks for good measure.  The cattle racks are just about as old, so they squeak incessantly with every bump in the road. (and for the record, there are NO smooth roads in Augusta county…or straight ones, either…meaning the squeaking/creaking/moaning/groaning gets more than a little loud) So, to keep from losing my mind with all the groaning and squeaking as I drive…I just crank Chris Ledoux (good driving music to my mind) a little louder and cruise on down the road.

After I did a few errands and picked up Toughchick, we headed toward the “goat farm”.  As we drove further into the countryside, we discussed possible scenarios. (repeating ourselves often to be heard over all the cattle rack squeaking and truck noises) We were making all sorts of guesses about the goat guy and his farming operation.

When we pulled into the driveway, it became obvious that this wasn’t the kind of “goat farm” we were expecting…or even the kind of…well, anything we were used to. 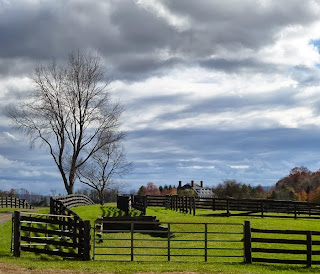 Did we look, feel and sound like the Beverly Hillbillies as we squeaked and rattled up to the barn? You better know it! I was kind of glad that I hadn’t worn my really dirty jeans and my worn-out work boots with the holes in them. My coat was dirty and smelly enough. But, the goats didn't seem to mind. 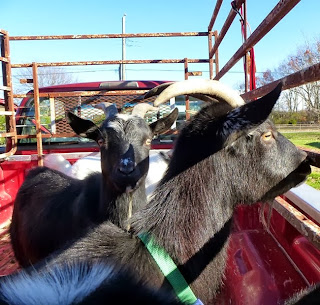 Long story short…the five goats hopped in were shoved into the back of the dodge, the noisy cattle racks closed and we headed away from the “goat farm”…squeaking and groaning as we went.  Of course we giggled a little as we drove along, talking over our latest shopping trip adventure and the funny looks the goats got at stoplights when they stuck their heads through the racks and went “baaaaaa!” at the passersby. 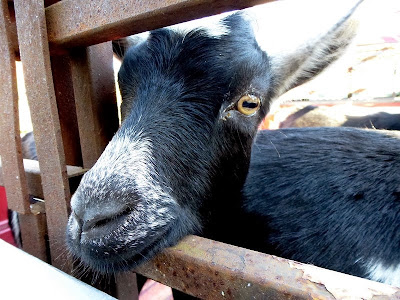 Now, that’s what I call a shopping trip!