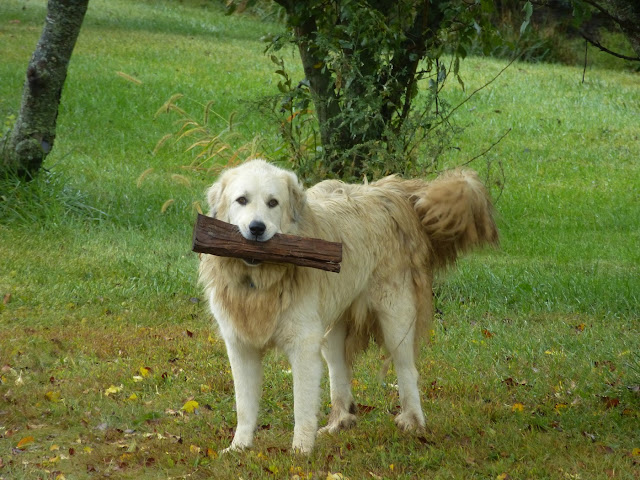 The change of season always seems to bring a change of weather, particularly in the fall. And, this year is no exception. The hot, dry weather has given way to cool, dark, dreary, dampness that has some of us thinking of firing up the woodstove. Okay, so I am the only one cold enough to think about the woodstove, but we are both wondering what Gus has in mind for the woodpile this year. Did you read THIS?

The gardens are definitely slowing down, or at the very least changing course.  The warm weather crops are just about spent...

and those cool weather crops are just starting to produce well. (except the Brussels sprouts…and that’s another story).

It will soon be time to pull out the old stuff and plant garlic for next year. The fall potato crop is just about ready for harvest, too.

The slow-down in garden work means that we can take a little break.

After completing my jelly project last Sunday, we took our first Sunday walk in a long while.

Our walk turned into a drive “around the block” just to see if anything had changed in the neighborhood (I use the term loosely) recently.

But, our little drive did show us just how dry it has gotten around here. Although, I must say...even when it's dry...this is a beautiful place to live. 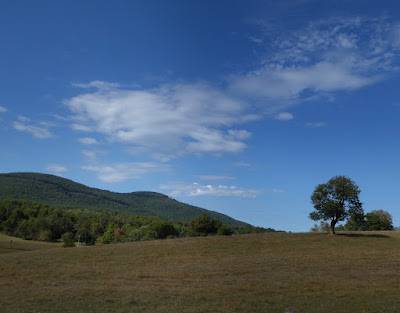 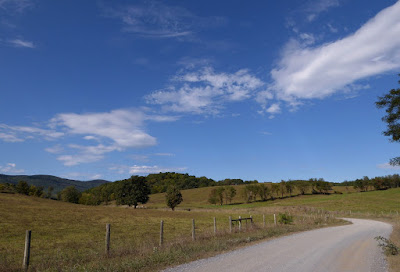 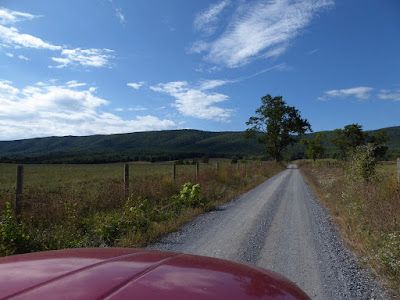 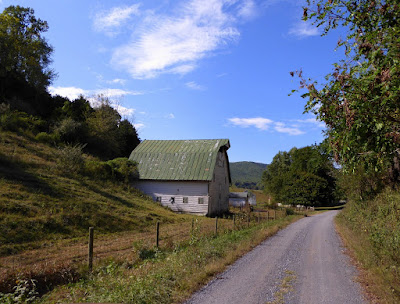 Not unlike the rest of the “neighborhood”, any grass growth here on the hill is non-existent so the Boss is freed from the perpetual mowing duties of the early season and can get caught up on the odd repair job around the place.

Since, the weather wasn’t all bad, job #1 was a gate into the lamb’s feed paddock. 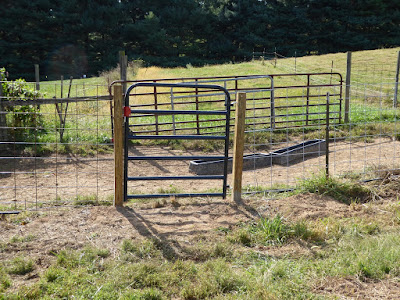 For years (and years) I’ve climbed over the gate to the lambs. 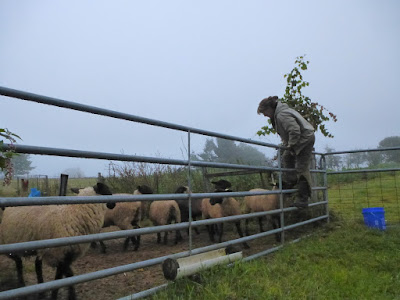 To feed them, to move them, to check on them…that’s a lot of gate climbing. It was just the way you got in the lamb paddock and I honestly don’t know what made him decide to do this project. (maybe I complained, or maybe he just took mercy on my bad knees, I can’t be certain)  The rock hard ground made the job a little harder. 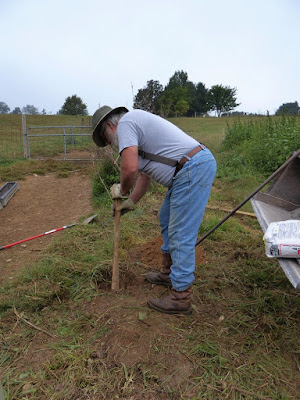 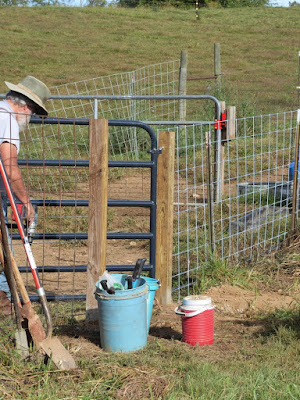 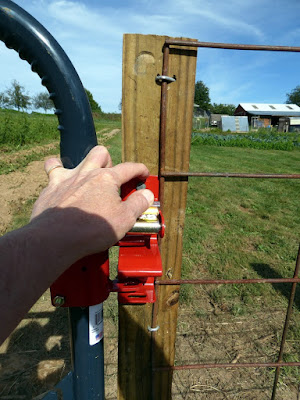 But, it’s done and my knees thank the Boss every time I open the gate and I am considering that my anniversary present.

We noted 31 years of married togetherness this week and I posted one of our wedding pictures on Facebook and truly appreciated all the nice things people said. I had really hoped to have a new picture of us. But, rather like cobbler’s families who often don’t have shoes, photographers don’t generally take lots of pictures of themselves. I guess I’ll have to keep working on that one.

The gate project wasn’t the only thing going around here this week. There are still lots of seedlings to transplant into the greenhouses. Although many of those didn’t look as healthy as I would like and I had to restart a fair number.  Added to the fact that chickweed is overtaking hoophouse #2 (that I just finished planting) and the re-growth on the lettuce just didn’t happen this week (meaning there was no lettuce for Market) I must admit, the hoophouses totally bummed me out this week. But, I seeded a bunch of new stuff, the Boss promised to help me battle the weeds, so maybe (just maybe) the upcoming week will be better. On an up-note, I do think I got the slugs under control!

In between projects, we had a couple of visitors. The grandbabies (and their mothers) came by to visit. And, since there are those of you keeping up with their progress, here they are. I did manage to get him to take pictures of the babies!


Then the UPS man brought what I am going to deem the Boss’ anniversary present on Friday afternoon. While the weather won’t be conducive to its prompt use, I know he’s going to appreciate it as much as I do my new gate. Are we romantics, or what?

…and I’m pretty sure it’s raining as I type…so outdoor activities will be at a minimum again this week. That’s really a good thing. I don’t really want to admit how long it’s been since I did any filing, data entry work, or balanced the checkbook. Those tasks are highly necessary and really need to be completed. Perhaps a tidy desk will encourage more work. (ha) And, with the rains, maybe we will get some re-growth in the sheep paddocks before the real cold of winter. So, no complaints about the rain and gloom. Although I may need some extra caffeine…
Hope you’re having a Happy Sunday!


Thanks for stopping by. Come “visit” us again real soon!

It always happens. Just when you think summer might just last forever. That this is the year the garden harvest just won’t end…

Sunday night’s forecast called for cooler temperatures. Much cooler temperatures. So much cooler that we found ourselves rather unexpectedly hauling row cover out to the garden after supper. The last planting of greens beans is so close to being ready for harvest. So very close. We didn’t want to chance losing them to the cold. 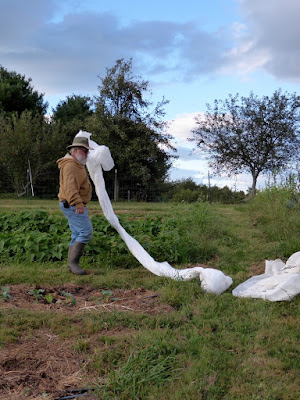 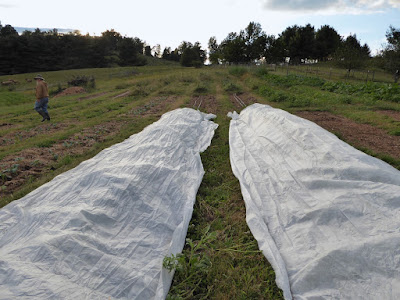 The forecast was for the low forties and here on the hill, we have seen patchy frost when the temperature was 42*. (don’t tell me this isn’t possible, I have photographic evidence) So, when the overnight forecast drops during the growing season, I get just a little edgy.

Monday morning dawned clear and cool. 43* was our “official” reading. The neighbor down the hill had 39*, although he didn’t report any frost.  It seemed like fall was here!

There was a definite difference in the garden. The chilly weather spelled the absolute end of the tomatoes. (they are at the point where we just need to tear them out and wait until next year) The okra plants lost most of their leaves and production dropped WAY off and the zucchini growth slowed down considerably. But, I don’t think the brassica plantings even noticed. And, the green beans were safe!

We’d get back to the garden soon, but first it was time for a roadtrip.

The next to last batch of lambs had to be hauled to the processor’s.

That job takes at least a half a day. The vast majority of that time is spent driving the interstate, which even though it was a pretty day, can be more than a little trying as we make our way through the Valley with all the big trucks and speed maniacs on the roadway. But the lambs were loaded, hauled and unloaded with little incident. I think we both heave a huge sigh of relief when we turn back in the lane with the empty trailer.  In a couple of weeks, we will head back to pick up our new inventory.

Back at home, the Boss turned his attention to a project that had been put on hold during the push of summer. One project turned into two and required a trip to town. Now, we have a big stack of cattle panels sitting in the trailer, waiting until he has time to get back to the job. …and a gate. I am SO excited about this gate! But, you’ll have to wait for a progress report.

I played catch-up around here all week.

I finally got to all the leftover, culled produce that seemed to be everywhere. I sauced apples, grated zucchini, chopped okra, juiced the last of the grapes and even made some tomato-ginger jam. Now, I just need to get all the canned goods put away and we will be ready for winter eating. …

Oh, I need to make jelly. Because the grape juice is still waiting for my attention.

Sadly, the cool weather didn’t last. (I’m kind of ready for sweater weather…or at the very least not sweat-y weather) By the end of the week, we were back to the heat again. This is combined with a total lack of rain, so the pastures are drying up and the trees are beginning to lose their leaves. It’s a strange combination that has me just a little worried about the grass supply. (I am not alone in that concern)

The gardens and hoophouses can be irrigated, so the lack of rain is not a big concern there. However, the odd, changeable weather makes for an odd, unpredictable growth pattern, so the harvest is not what we might have hoped in the hoophouses. But, the planting continues, so maybe we can get back on track before winter. And, we are starting to harvest all those brassicas we planted earlier in the season. Here’s hoping they continue to produce as expected and we have broccoli until the end of the Market.

Somehow, the Boss found time for another project he had been wanting to do.  Years ago, he built a gravel path from the house to the barn, complete with steps down the little hill. By using gravel, we eliminate some of the mess in the house. Believe me, any decrease in dewy grass and mud and barn waste that is tracked into the house is greatly appreciated when it comes to keeping this place relatively clean. (although, I still make a mess)

Over time, the grass filled in the path and while it makes a lovely little place for barn kitties to nap, it wasn’t helping the war on filth in the house.  The Boss fired up his propane torch and got after the weeds in the path.

I wasn’t too excited when he created a charred and smoldering path, even though the weeds were gone. All I could imagine were black, sooty footprints in the house instead of grassy, manure-y ones. However, he wasn’t done.  There was still some gravel left from the French drain project…so, now we have a lovely new gravel path to the barn. Yay for a clean-ish floor! 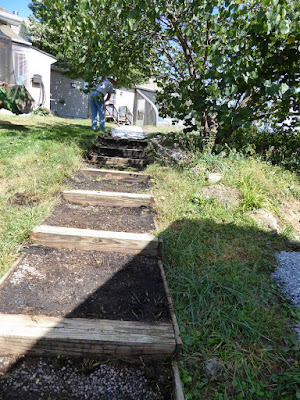 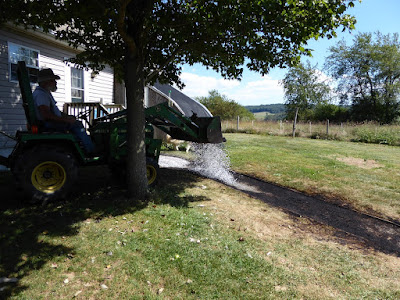 Saturday’s weather was lovely for the Market.  Although the cool, dark morning meant sales got a late start, it was a great day nonetheless.

The upcoming week has the promise of some much-needed rain and a return to cooler temperatures with the official arrival of Fall. Here’s hoping the forecast is right!

But…first, my plan for today includes making a few loaves of bread to go with that grape jelly…


Hope you’re having a Happy Sunday! 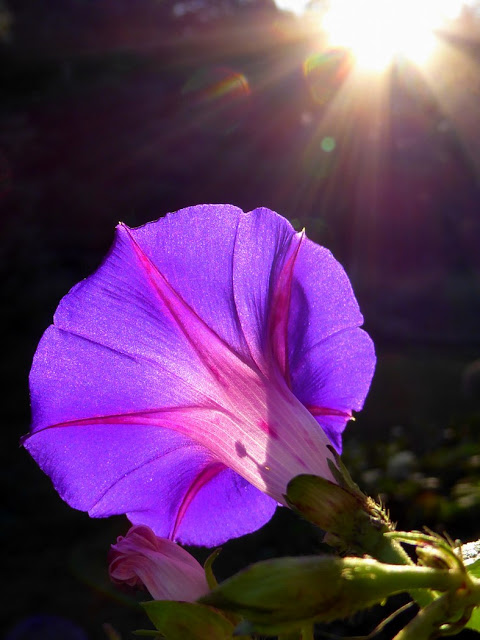 Thanks for stopping by.  Do come “visit” us again real soon.