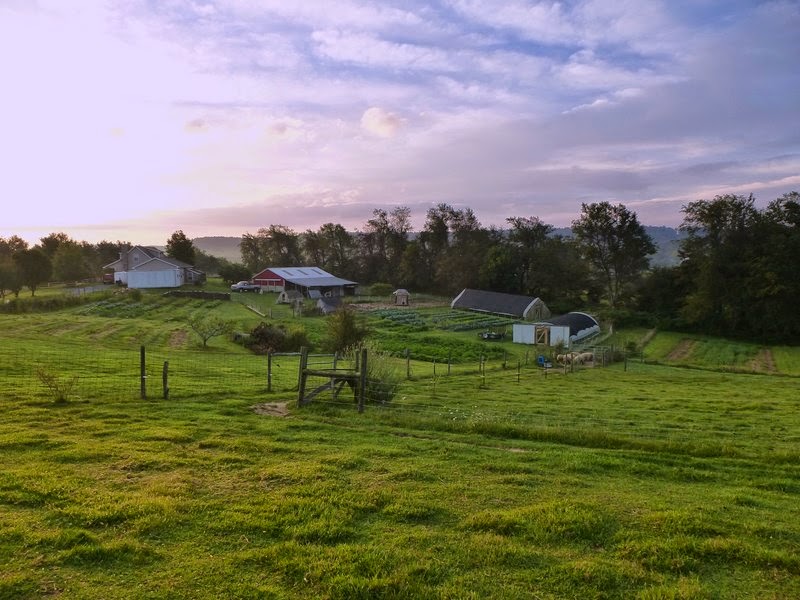 I’m sorry to say…but, it’s been a pretty boring week here on the hill.

That’s despite two (yes, TWO) trips to the dump, changing the ram marker and the annual delivery of firewood. (thanks, Wes!)

But, there is just something about August that makes for dull farm news.   Although, the weather has been unusually nice.

Maybe it’s that the routine has become monotonous---just how many times can I pick beans? ---is it time to get ready for Market again? ---haven’t we canned or frozen everything we need for winter…and then some? Maybe it’s that we feel like we’re in a holding pattern---it’s too soon to process lambs and broilers…the seedstock garlic hasn’t arrived yet (and it’s too early to plant that anyway)…it’s too late to plant anything in the garden. Maybe it’s just time to move on to something else.

The outdoor growing season is beginning to wind down.  While all the rain last week was wonderful…it also brought out the late season leaf diseases that will spell the end of the squash and tomato crops far before our customers are ready to see them end. …and it’s too late in the season to start any more.  Sad days indeed as we say “so long” to the quintessential crops of summer.

Despite the whole Brussels sprouts debacle (did you READ this?) we actually have the best looking Brussels sprouts crop ever!  But, the plants needed some attention before we will be able to harvest the sprouts.

The plants grow quite tall…about 3 feet…with large leaves extending outward from the plant at regular intervals.  The sprouts grow at the juncture of the leaf and plant.  By removing some of these leaves from the plant, we force the energy into larger sprouts and it allows good air circulation to encourage growth as well. (it also allows us to inspect for pests and pest damage fairly easily) Since our operation is so small, this work is done by hand and the hens get to feast on the bounty of plant waste.  I cooked up some of the odd and random sprouts for supper one night despite the fact that it was a little too early to eat them. (a frost is said to bring out the best taste)  We should be able to offer them for sale at the Market in the relatively near future, which will grant a successful ending to the saga of the Brussels sprouts of ’14. 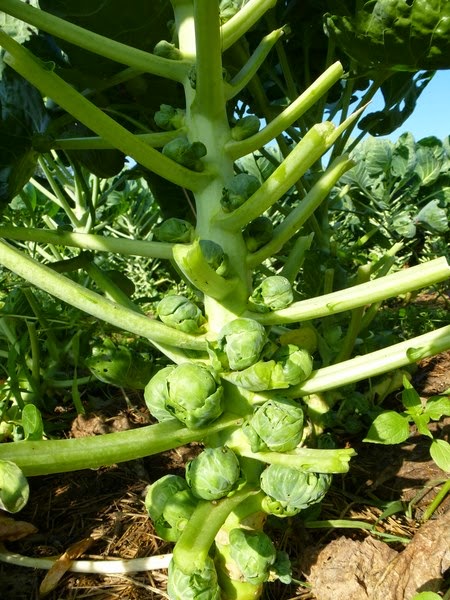 I guess there is some news after all…we are beginning to see pullet eggs.  You do know what a pullet eggs is, don’t you?  A pullet is a young female chicken.  When they begin to lay eggs (somewhere around 20 weeks of age) the eggs are quite small and the production is rather sporadic.  Hence, "pullet egg". Within about a month, the eggs reach “normal” size and the hen is laying an egg about every 26 hours.  It seems like we’ve had this batch for ages and we were happy to finally see that egg laying has begun.

And, then the Boss checked on the fall potato crop and look what he found! (Guess what we ate for supper)  Just a couple of weeks and we will be able to take them to Market. 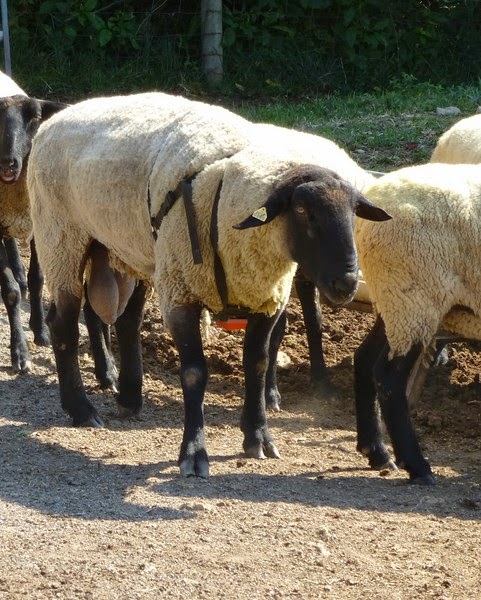 This week we should know if Waylon has finished his job with the ewes.  By changing marker colors, we will know if any of the ewes didn’t “take” the first go-round.  All the ewes got marked during the first yellow marker timeframe.  I am really hoping we won’t have any re-marks. This post from 2012 explains this whole process a little better. Read this. If everything is a go…we’re looking at a barn FULL of lambs around mid-January. I am really looking forward to this as we have SIX new ewes in the flock this year.  I can’t believe I am going to say this…but, come on, January!

Despite the odd summer weather that is quickly coming to an end, the garden continues to produce…and the Market continues to set records. This week was no exception, despite the fact that we didn’t have any green beans.  (of course, they are ripe now, so I will be heading out to the bean patch later TODAY) The Market is a challenge, physically and mentally, but it’s also a lot of fun and we had great music again this week and that always adds to the experience.

…and…I guess that does it for the week here on the hill. (See?  I told you it was boring!)

Oh, we did have a couple of "visitors" to the hill this week.  The dogs went crazy for at least a half an hour as they spotted a turkey in the brush across the lane. It finally flew off, much to my relief and the dogs' dismay.
Then as the Boss grilled for supper, he was joined by a praying mantis.  The mantis even brought it's own meal! Kinda gross, but kinda cool.  Praying mantises (?) have to be my favorite insect.  Did you READ this? 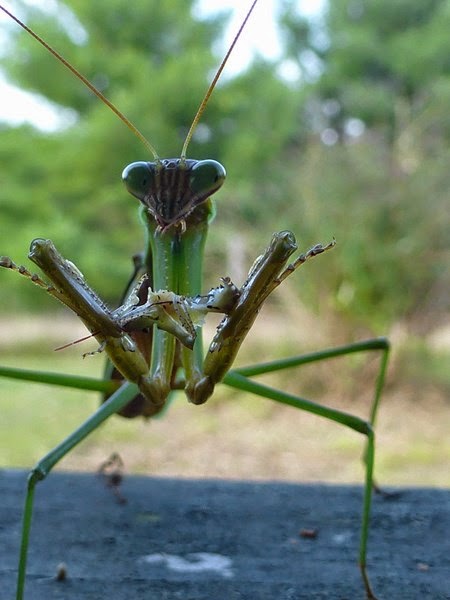 Tomorrow is “flip day” (you know…when you flip that calendar page) as well as Labor day…so maybe we will see some real changes as we move into September.


Hope you have a Happy Sunday!

Thanks for stopping by.  Please come visit us again real soon! 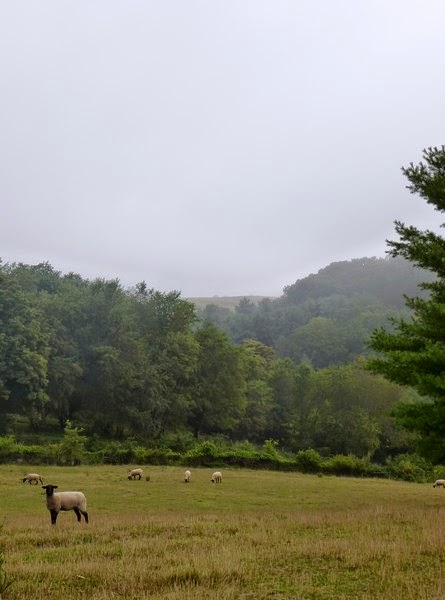 While the calendar still says August, there is a difference in the air and the light that lets me know FALL is right around the corner. 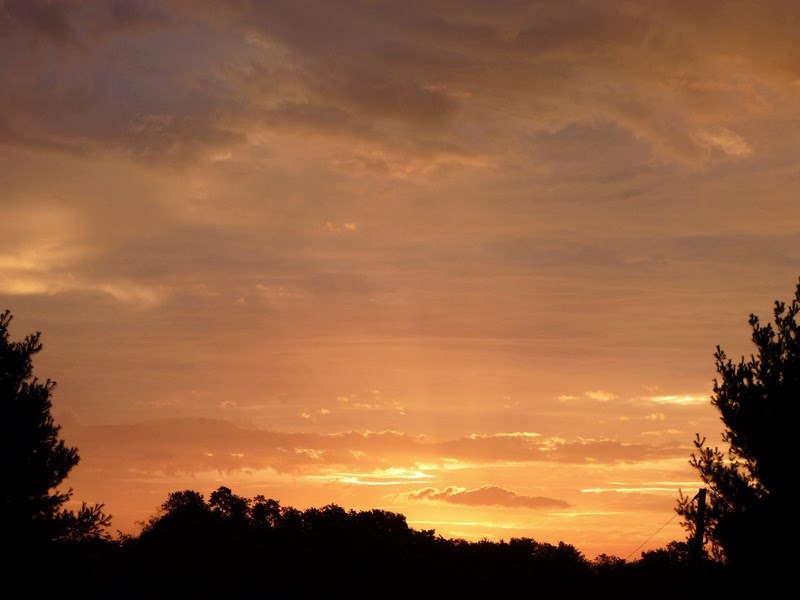 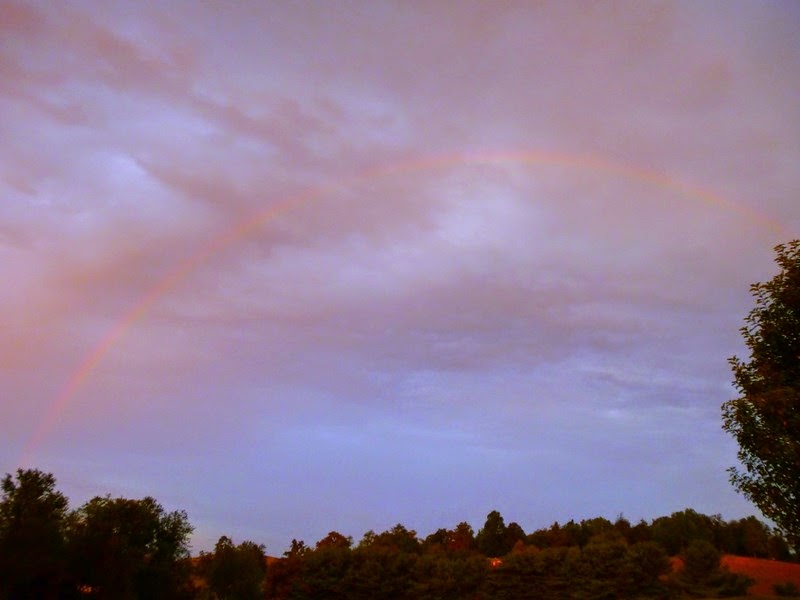 The heat and humidity gave way to fog and cooler temperatures and we got THREE inches of rain in twenty four hours on Saturday! But, I’m getting ahead of myself.

It’s the time of year when the gardens look tired and overgrown.  The grass for grazing looks tired and somewhat overgrazed. And, quite honestly I’m feeling a little tired and over…something. It’s really hard to be enthusiastic this time of year.

The Boss can bush hog in the gardens, but there’s not a lot we can do for the paddocks, except pray for rain.  This rain will really help the outlook for fall grazing. It helps our (my) attitude, too. 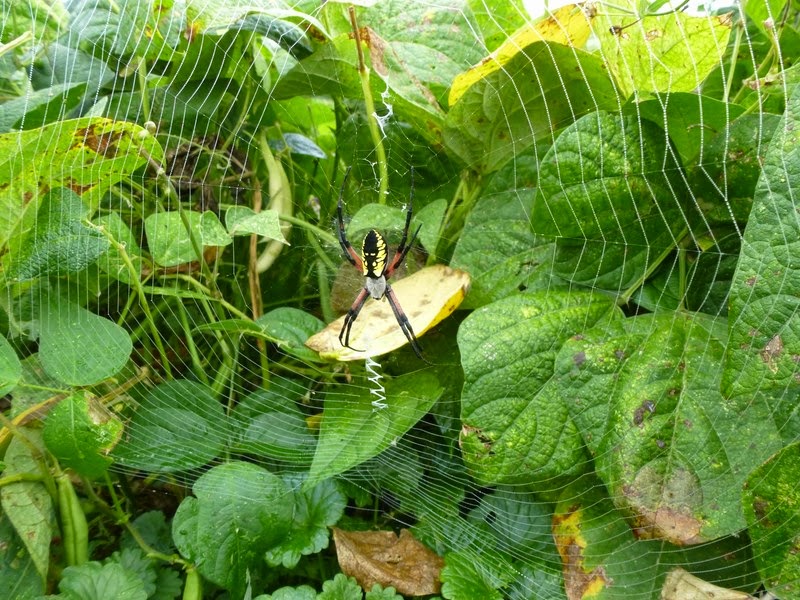 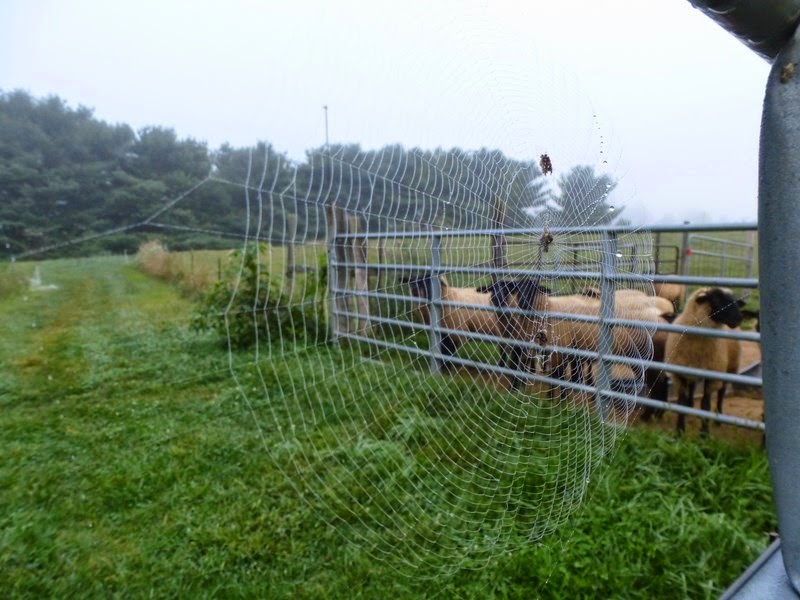 There are other signs of fall.  There are lots of garden spiders spinning intricate webs in the spent plantings.  While there are lots of folks who find spiders creepy, I have always liked them…well, except for walking into spider webs, can’t say I enjoy that.   Did you read "Rock on, Charlotte"?

I guess I should feel bad that there are so many thistles...but, the butterflies and bumblebees (and goldfinches) are enjoying them. 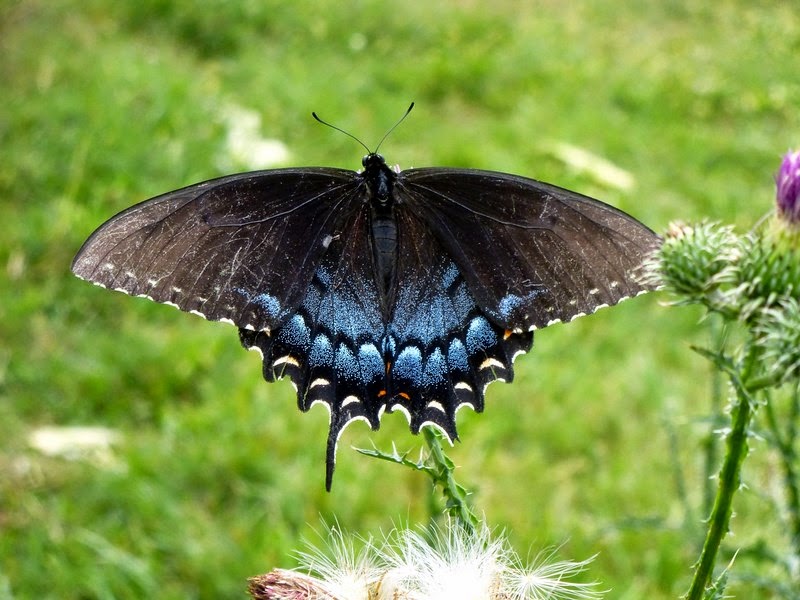 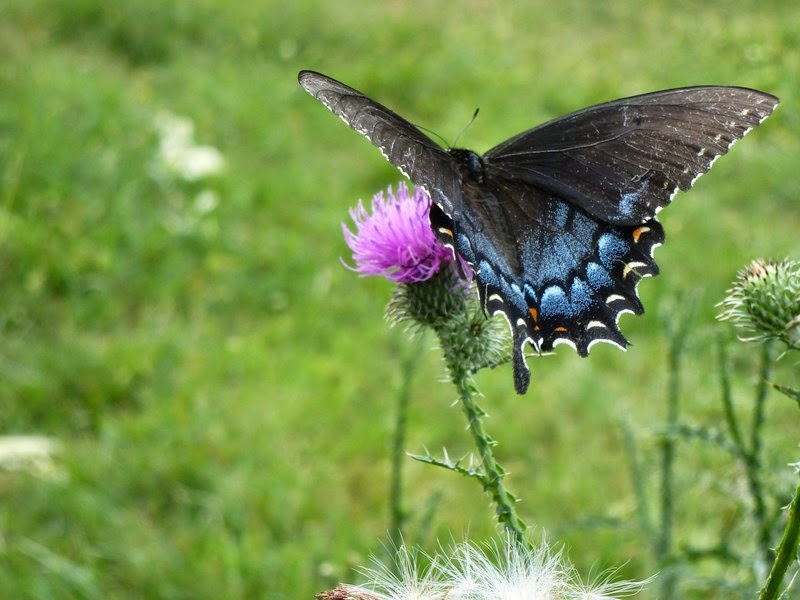 As I picked beans (for at least the eleven millionth time) I noticed a lot of little birdnest fungi in the dead and dying leaves that litter the ground of the bean bed. Part of the fungi family Nidulariaceae these unobtrusive little plants actually help break down old plant matter in the garden.  …and they’re just kind of cool. You can read more about them HERE.

The Boss and I finally got all the onions trimmed and sorted and stored for winter.  That was a pretty

big job and took us the better part of two days to complete it.  It’s a good thing we like each other and get along well…we spend most all of our time working together!  Now that all those drying onions are out of the barn, the Boss can focus on getting the rest of the barn cleaned out before the ewes come in for the wintertime.

The shift in light means there is also a shift in the crops for harvest this time of year. There are BUNCHES of tomatoes.  And, the peppers are FINALLY coming in along with broccoli and chard.  Actually, we have managed to have broccoli and chard all summer, but this harvest looks especially pretty.  And, the fall potatoes look to be the best (or at least the nicest plants) that we’ve ever grown.  Just another month or so and we will see what lies beneath the surface.

All the fresh produce gives us an opportunity to work on some new marketing ideas. Presently, we are working on photographing some of our lamb recipes. It's a real team effort. I make the recipe...and he takes the photographs. ...and we both enjoy supper! 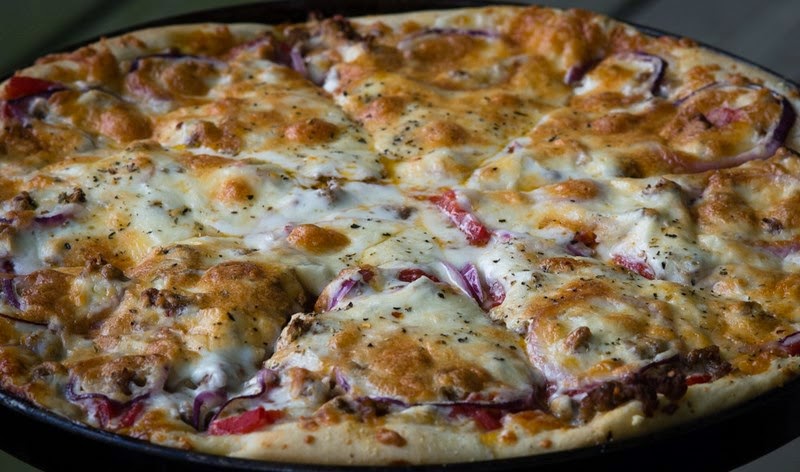 Then, we can post pictures and recipes (check out the recipe tab at the top of the page). The photos are used as part of our Market set-up. This week,we took advantage of the prolific tomato crop and followed a customer's advice for a new type of home-made pizza.  Instead of sauce, we sliced San Marzano tomatoes and topped with lamb sausage, red onions and cheese.

I’ve started more seeds for transplants and the hoophouses are nearly filled to capacity. It looks like we should have lots of greens for fall sales. It’s a toss-up as to which is more popular…kale, lettuce or spinach. And, I am still wondering just how much spinach we could grow and sell. As of yet, we have not found a limit. Yes, I did start more, more, more. I’m going to need more hoophouse room. (just kidding, Boss) 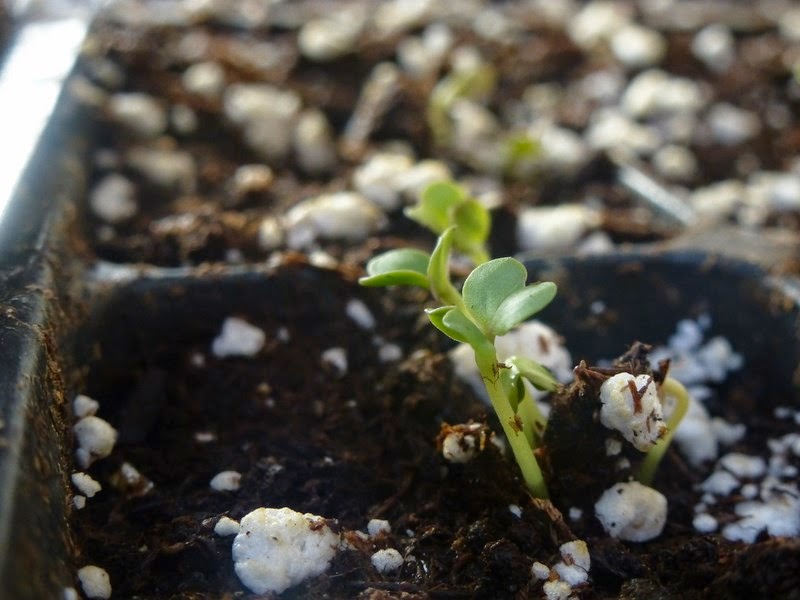 Saturday was a great day.  We woke up to 1 and ¾ inches of rain in the gauge (and it was still raining).  The rain let up for Market, The Findells provided some great music (and quite possibly caused the rain), and we had a tremendous sale day. Then we took the whole family out for a delicious lunch at the Depot.   After we got home, un-packed, did chores and started to relax...it rained, AGAIN.  Over 1 1/4 inch this time!  Wow! a summer's worth of rain in one day.

That pretty much sums up our week. Certainly doesn’t seem like much…

There was a big, really BIG, announcement in the family this week. 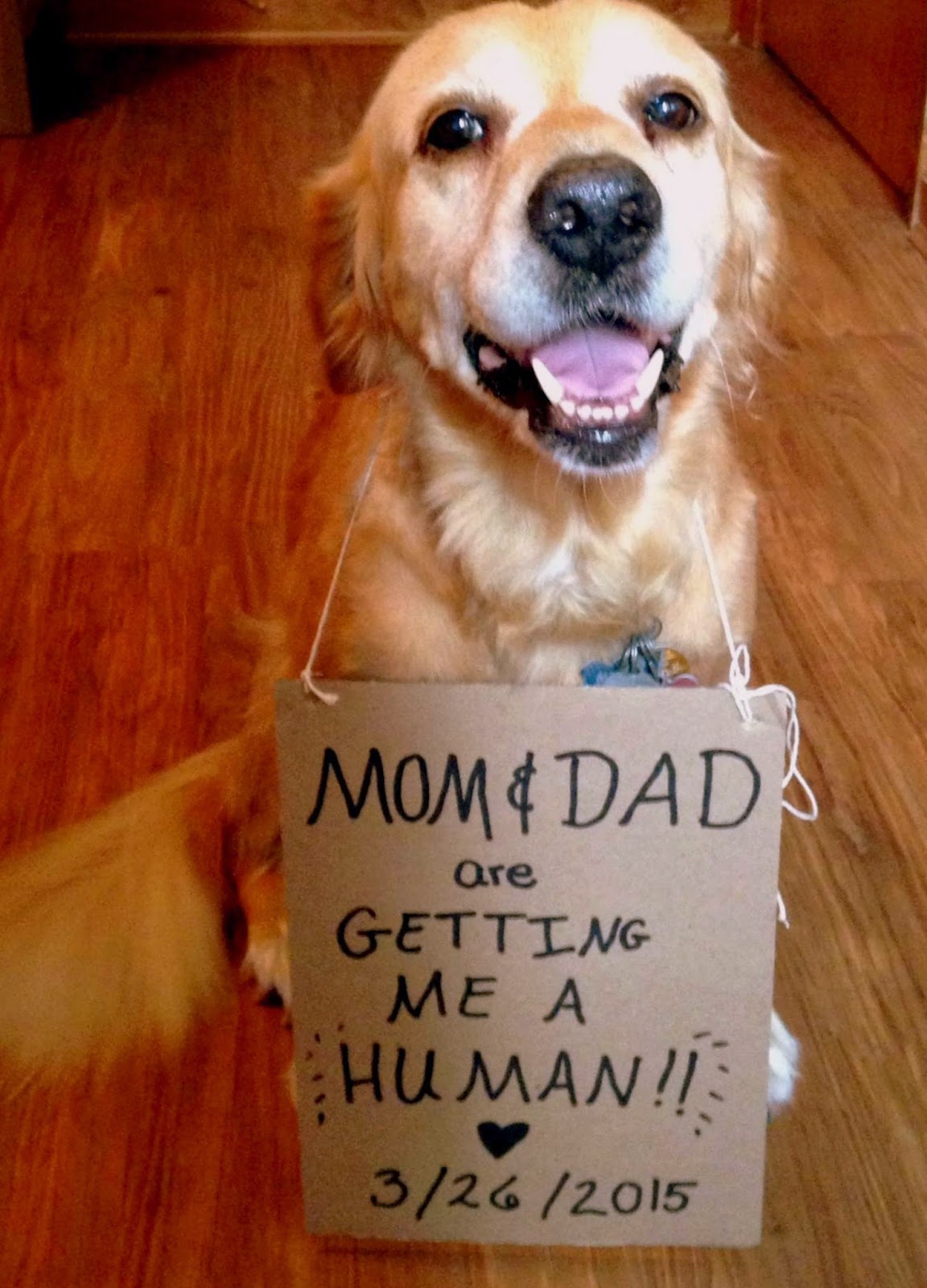 For those of you who don’t know…this is our daughter and son-in-law’s dog, Savannah.

And, yes, her “announcement” means that we are going to be grandparents!

Now, that news makes for a very