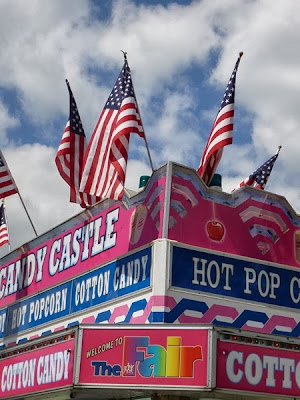 
…and Rockingham County Fair is one of the best.

They’ve got the awards to prove it.

Harrisonburg, Nov. 22, 2013 - The Rockingham County Fair has been selected to receive three Awards of Distinction from the International Association of Fairs and Expositions (IAFE) headquartered in Springfield, MO. The competition involved more than 1,100 Fairs around the world.
The John Deere Excellence in Agriculture Awards will be presented December 10, 2013 during the 123rd annual IAFE Convention in Las Vegas, Nevada.

Winning entries for the Rockingham County Fair include:


Congratulations to General Manager, Jeff Ishee, and all the good folks involved with the Fair!

I’ve seen some of the “behind the scenes” stuff and it is an amazing operation.

You may wonder why I’m posting about this.


Photography is among the Boss’ many talents and  I think it’s incredibly cool that one of his photos was picked in this competition. I have always thought he was good…but, he seems to think I might be more than a little bit biased. This was the second year that he had been invited by the General Manager (our good friend, Jeff Ishee) to photograph the fair.

He does the photos for the Staunton/Augusta Farmers' Market site and Facebook page as part of his Market Master job.  Follow the links to view some of his work.

So, congratulations to the Boss, too!

…and a big THANK YOU to our long-time friend Jeff for giving us the opportunity to share a little in the Fair experience!

Here is the link to some fair memories on flickr.  http://www.flickr.com/photos/rockinghamcountyfair/sets

I hope you're following Holly Spangler and the other