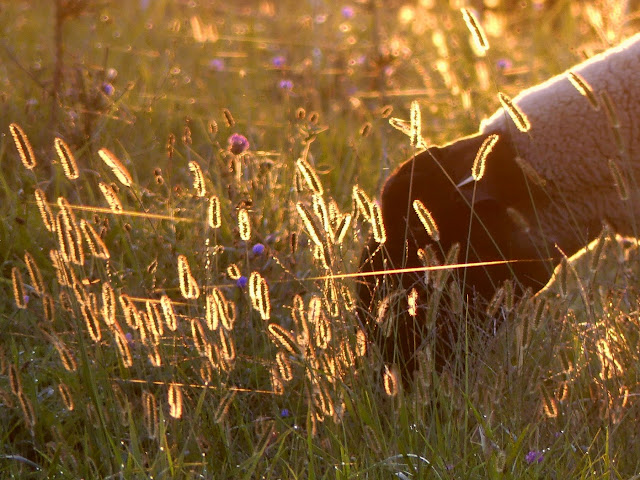 August is nearly over!

I must say, I’m more than a little happy to note that development. August can be a real challenge. It’s hot, stressful, and in a word, just “August-y” (I know, not really a word, but work with me here). However, for all the heat and pressure, there are good things about August, too. So, read this blast from the past.  Click here. 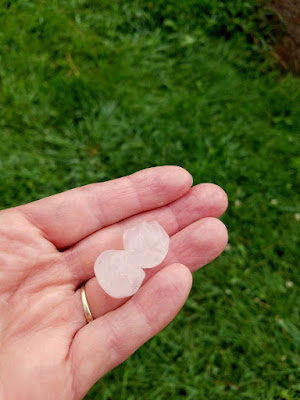 This year, the first of August brought us a hailstorm. I was going to call it “the mother of all hailstorms” until I saw a report about grapefruit-sized hail outside of Denver, CO earlier this month. YIKES That made our quarter-sized precipitation sound fairly puny by comparison. However, hail (of any size) isn’t a good thing. Particularly on a farm.

After the storm, we went out to survey the damage, which seemed surprisingly light. The animals were fine. The vehicles had escaped damage. And, at first glance there was just leaf damage in the gardens. We heaved a sigh of relief and went on to other things.

Later, we would find that the hail had damaged every single zucchini. It looked like a pack of rabid beavers had been through and taken huge chunks out of all the fruit. I picked a least 50 pounds of teeny, tiny damaged fruits off the battered plants. Then, it took about two weeks to see recovery. The green beans weren’t as damaged, but the plants were terribly stunted. And, many of the tomatoes were scarred beyond use. Oddly, the storm was incredibly localized. No one else we spoke with had any sort of damage.

Storm damage or no, we had other things to do. Other things included processing a batch of broilers, hauling a (huge) load of hay, and something else…maybe a dump run…all in one week. And, then doing the Market. In the sweltering heat. I gotta say…we rock! Sometimes I am slightly amazed at the number of things two old broken-down folks can accomplish in a week.

There was a run over the mountain to get yet another follow-up scan. That is always stressful. And, while the news was “still the same” (and that’s good…really good), the uncertainty of everything after that diagnosis in 2016 continues to haunt us. But, we’ll take the good news for now and move on.

If you’ve followed the farm page for any time at all, you know that August includes  "Happy Ram Day". That’s when we turn the ram in with the ewes to start working on the lambchop crop for the following year. With a young ram, this can be a tricky proposition. You just never know how he will react or if he can (or will) do the job.  I am happy to report Otis got outfitted with his marker and went right to work. I mean that quite literally. Within the first three days, he had marked all but two of the ewes. The Boss questions the reality of these marks and puts them down to over-enthusiasm. Since we changed the marker to green the day before yesterday, we will have to wait and see. if you’re wondering about rams and marks and all that. you can read these old posts that give some insight on sheep breeding 101.

In any case, we should be looking for lambs around the first of 2020!

We get a break from the sameness and hot of mid-august with MrB’s birthday party. It’s always fun to watch the little kids having a blast splashing in the water. Number 2 grandson is now 4 years old. Can’t believe our little guys are growing up so fast! 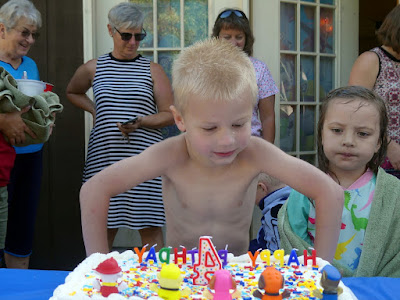 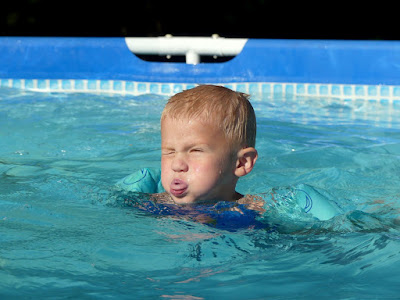 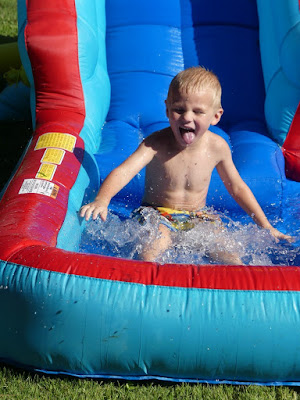 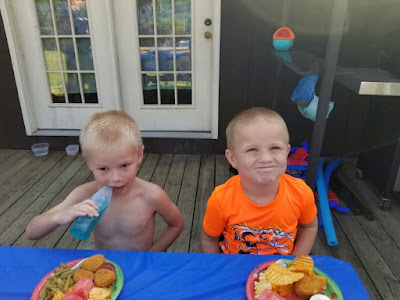 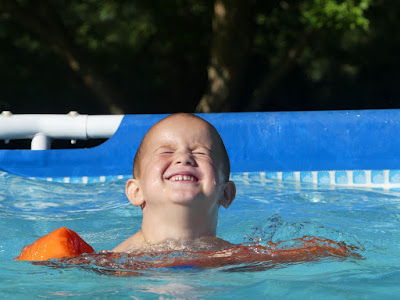 Back on the hill, we’re still doing a little re-configuring and down-sizing.

But, things change and life moves on. The reefer wasn’t being used anymore and really needed to find a new home. Ever tried re-locating a reefer? It seemed like it was going to be yet another headache.

Our friends out at  Malcolm's Market Garden were interested in having more storage space for their growing operation and purchased the reefer. (yay) And, we just happen to have a son-in-law who is an expert commercial driver. (another yay)

He and the Boss made the loading look easy. And, the trip “over the river and through the woods” was amazingly smooth and simple.

Just like that, the reefer has a brand-new home. I hope it serves the Malcolms for a good, long time! And, I gotta say, Tyler kinda rocks, too.

Other than that…there isn’t much news to report from here on the hill. August continues to be just plain “august-y”…

It seems to be the summer of butterflies and humming birds!


The Market has been amazingly busy this summer and set an all-time record last week! That’s good for everyone, vendors, customers AND the City. You can check out the Boss’ images here. https://www.facebook.com/stauntonfarmersmkt or https://www.flickr.com/photos/stauntonaugustafarmersmarket

But, I’ve very nearly missed the Market more than once this season…
...one week there was a deer in the orchard.  The next there was a 'possum stuck in a rat trap in the barn. The ensuing "duet" between the angry 'possum and the dog was nearly deafening.

And, then the following week...

When I was loading up the car, I saw something at the end of the driveway.

Before I could even investigate, the dogs were off and barking furiously…at the four steers who had strolled across the lane to eat the tender grass by the gate. (since TEN calves live in the field across the lane, and I could only account for 4, the morning had the potential to get REAL interesting) There was no way to drive through the gate without dogs escaping or cattle stampeding. And, I could just envision them running through Mbrk at 6 o’clock on a Saturday morning, startling every dog into a barking cacophony. Not a good idea, by any stretch of the imagination. I must say, I had absolutely NO desire to chase cattle or dogs. But, whatcha gonna do?

I called the Boss to apprise him of the situation (since I was already running late) and he called Neighbor. Since, herding calves is all about angles and I knew that if I was calm enough (and the dogs didn’t get crazy) it could be done with relative ease. Three of them reacted just like I hoped and headed for home. But, the fourth one started down the lane and I had a little momentary panic. Fortunately, I got him turned back up the drive just as Neighbor came out to run them all back into the field.

All’s well that ends well! It gave me a good story for Market…and I can claim that I have herded cattle every summer for at least 20 years. (still not sure if that’s a good thing)

So, I guess on that note, I’ll wish you a

Thanks for stopping by! Hope you’ll come “visit” again.