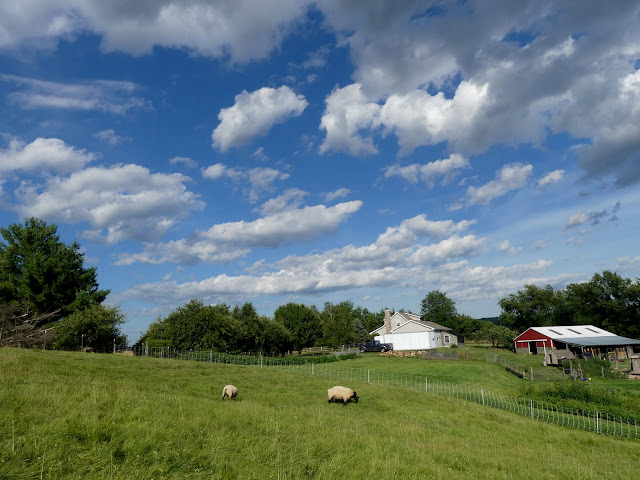 The brilliant blue skies and gorgeous days of early summer nearly take my breath away on occasion. It is on those days that I recall a snatch of a line from one of the poems my grandmother had memorized as a child and was always ready to recite at an appropriate moment.

It wasn’t until very recently that I realized there was more,  so much more, to the poem.

And what is so rare as a day in June?
Then, if ever, come perfect days;
Then Heaven tries the earth if it be in tune,
And over it softly her warm ear lays:
Whether we look, or whether we listen,
We hear life murmur, or see it glisten;
Every clod feels a stir of might,
An instinct within it that reaches and towers,
And, groping blindly above it for light,
Climbs to a soul in grass and flowers;
The flush of life may well be seen
Thrilling back over hills and valleys;
The cowslip startles in meadows green,
The buttercup catches the sun in its chalice,
And there's never a leaf nor a blade too mean
To be some happy creature's palace;
The little bird sits at his door in the sun,
Atilt like a blossom among the leaves,
And lets his illumined being o'errun
With the deluge of summer it receives;
His mate feels the eggs beneath her wings,
And the heart in her dumb breast flutters and sings;
He sings to the wide world, and she to her nest,—
In the nice ear of Nature which song is the best?

Now is the high-tide of the year,
And whatever of life hath ebbed away
Comes flooding back with a ripply cheer,
Into every bare inlet and creek and bay;
Now the heart is so full that a drop over-fills it,
We are happy now because God wills it;
No matter how barren the past may have been,
'Tis enough for us now that the leaves are green;
We sit in the warm shade and feel right well
How the sap creeps up and the blossoms swell;
We may shut our eyes, but we cannot help knowing
That skies are clear and grass is growing;
The breeze comes whispering in our ear,
That dandelions are blossoming near,
That maize has sprouted, that streams are flowing,
That the river is bluer than the sky,
That the robin is plastering his house hard by;
And if the breeze kept the good news back,
For other couriers we should not lack;
We could guess it all by yon heifer's lowing,—
And hark! how clear bold chanticleer,
Warmed with the new wine of the year,
Tells all in his lusty crowing!

Yes, James Russell Lowell certainly “got it” when it comes to the lovely month June. If you were to close your eyes during a recitation, the picture conjured in your mind’s eye would most certainly be the farm in the first days of summer. 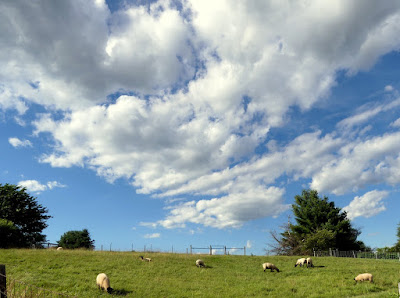 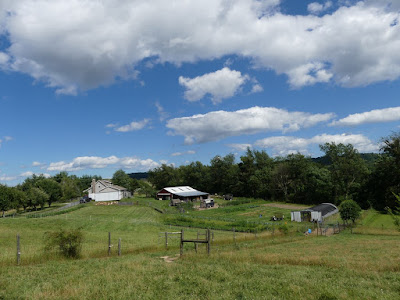 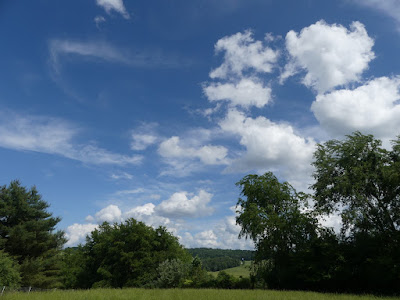 By early June, there is no mistaking the fact that we are smack-dab in the middle of another season. You can almost see the grass growing, the gardens are progressing nicely and the earliest of crops are ready for harvest.

So, you might think that our days are filled to the brim with productivity and that we labor until way past dark as we endeavor to keep ahead of the ever increasing “to-do” list. Or at the very least, feverishly writing/working on my book project. But, you would be wrong. It seems that I spend far too much time sitting, trying desperately to recall what I was supposed to be doing and why my left thumb hurts. I’ll let you in on a little secret, the pain of fibro is probably not the worst thing. The exhaustion and brain fog make everyday life a real challenge.

But, that’s nothing new and you certainly didn’t come by to hear me whine. So, let’s see what’s been going on here on the hill.

Like I said, the beautiful days of June bring an up-tick in the workload. And, while we’re in the midst of making some pretty major changes and doing some serious down-sizing, Life goes on. Much of what we do follows the same routine from year to year, the rhythm being set by the ever-changing weather. Some years seem to follow a salsa beat, sometimes a sultry tango…this year is more a cha-cha…one step forward and then back. Or maybe that’s the hokey-pokey (which seems somehow far more appropriate).

After the ewes were shorn on Memorial Day (thanks Amanda and Sahara!) they headed out to graze and gain condition until they meet up with Otis in early August to work on the 2020 lambchop crop.


And, speaking of lambchops…

Our customers have been asking for chops and other goodies for quite some time. We simply cannot keep up with demand and probably never will. (for the record, we definitely won’t this year!) But, the long-awaited processing date finally arrived. We needed to run them all to the barn, sort out the big ones and hit the road.

When we brought the lambs in for sorting, the Boss took advantage of the close quarters and gave Otis a quick “hair-cut”. Now, no offense to the Boss (and do NOT tell Otis) but this was definitely NOT one of his best efforts. Otis is fairly lumpy and I must admit I’m not being completely honest when I say “hello handsome” out in the field. (like I said, don’t tell him, I wouldn’t want to affect his self-image and libido for later on) But, the shearing job was quick, painless and more importantly, without incident. And, just like a bad human haircut, it will grow out eventually.

More importantly, we got the first load of lambs off to the processor without incident and we head back to pick up the lamb chops, steaks and roasts tomorrow. Next week’s Market total should be amazing as I had numerous folks asking for reservations yesterday. I am just wondering if we will have enough to last until the next processing date!

In garden news, despite a tractor break-down that involved TWO trips to the dealer for parts, we got the tomatoes planted.

Just a little aside here, keeping geriatric name-brand equipment in running order is not always easy. (or cheap) But, making repeated runs for parts is far less costly than new equipment. 30 years and still runs like a Deere. I just wish I could say the same thing for the lawnmower that is sitting in the shop. Again. (sigh)

Anyway, about planting the tomatoes…

Now, I am definitely a fan of the home-grown tomato. You should read at least one of Sean Dietrich’s essays on tomatoes. https://seandietrich.com/homegrown-tomatoes/ (actually, read anything by Sean Dietrich…the man is a treasure.  www.seandietrich.com )  There is nothing like biting into a tomato, fresh from the vine, juice dribbling down your arm while you're still in the garden on a hot summer day…  or a BLT on freshly baked bread after a busy day in the garden…tomatoes sliced with onions and cucumbers… or… well, you get the picture.

But, dang! Tomatoes are the most labor-intensive crop on the farm. By far.

We start the seeds in February or March, coddling them in the greenhouse through the cold weather. Begging those heirloom seeds we save from year to year to germinate and then grow can sometimes be a challenge. We place them in larger pots at least once to encourage good root growth. Move them to the big trailer to “harden off” before transplanting in the garden. By putting them in the trailer, we can move them with relative ease should the weather threat warrant (freezing temperatures or severe thunderstorms) Then, and only then, is it time to put them in the garden. And, that includes putting up trellises, laying down irrigation tape AND numerous trips to the barn for mulch. Then we wait. And wait. Even though there are teeny, tiny tomatoes on the plants when they go in the garden, we can’t count on any type of consistent production until at least July. Even in a good year (when we aren’t overrun by bugs or fungus or some other catastrophe) the season lasts a mere 2 months at most. At most.

Looking around the farm, I see so many other things I could tell you about. But, honestly, not even one of them is particularly newsworthy.


I could tell you about the sunflower that survives in the hen yard. A true testament to tenacity and being in the right place at the right time.


I could tell you about how being over-run by rats in the barn led to a new, creative, NON-poisonous experimentation in control. My biggest concern with pest control is the safety and well-being of all the farm team (humans, dogs, cats, sheep and chickens). That eliminates a lot of options.

I suppose I could extol the Boss’ virtues and tell you about the cool new planter he built attached to the front porch that means I can grow and pick lettuce/greens without scrambling around on my knees in the hoophouse.


What about the miracle of rain? We went from being inundated to experiencing a dust storm every time the sheep ran to the barn.

Or, maybe I could tell you how my life has been changed forever by the discovery of Google Lens on my phone. Did you know that if you take a picture of something that you can have Google identify it for you? Oh. MY. Goodness! Where has this been all my geeky life?

Here are just a few shots of my newly acquired knowledge.

And, there are so many other things. But, I have rambled on far too long, so I will leave you with something I heard the other day that I’ve been thinking about ever since.

I was watching an interview with Cheryl Strayed (author of the book “WILD”) and Oprah Winfrey. If you’ve got an hour or so…watch THIS.

They were talking about mindfulness (as it seems everyone does these days) and Oprah detailed her early morning routine. She wakes up, looks out the window and says (in her beautiful Oprah voice) “well, hello Day! Look at you! What are we going to do with you, Day?” There is such joy in that type of approach. You open yourself to so many possibilities and acknowledge new opportunities to experience gratitude, changing your outlook completely.

Then I realized that is what I love about getting an early start. Heading out to do chores at first light, I often pause to take a photo of the morning, much to the annoyance of my animal charges who are anxiously awaiting their breakfast. Every morning is different, every day a blessing (although sometimes in disguise). I used to tell my children that no matter what…tomorrow would be different. Another chance, another choice...

So I’ll leave you with a series of sunrise photos (each beautiful in its own way), so you can be inspired to say (Oprah voice is optional) ”Hello Day! What are we gonna do with you?”

All from pretty much the same vantage point over the course of a week or so... 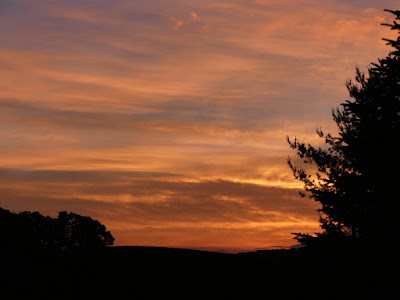 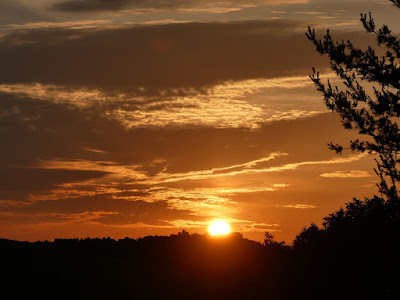 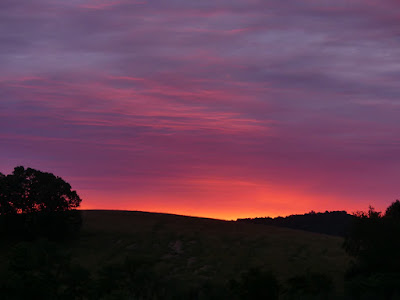 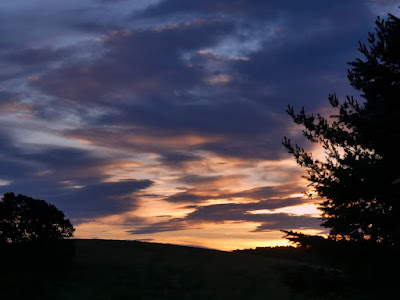 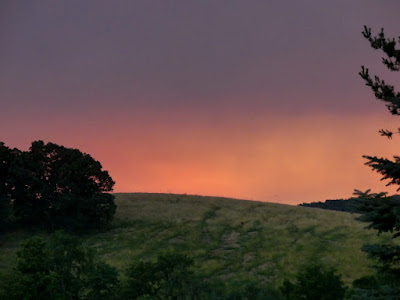 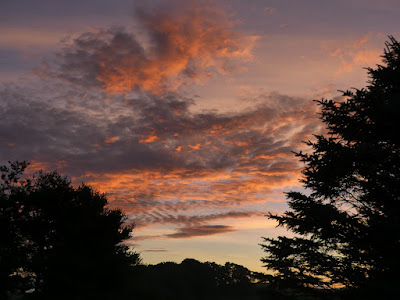 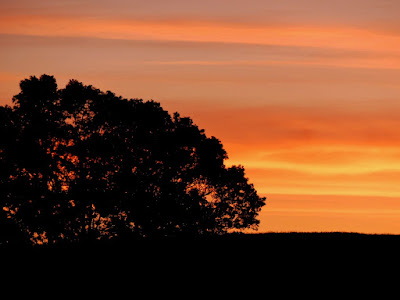 Thank you for stopping by. Thanks for reading. Come back and “visit” us again real soon.