Maybe it was that “crazy ideas” are pretty much the story of my life.

Oh, I don’t mean crazy like bungee jumping, parasailing or anything truly outlandish. But, more than one of our “valley adventures in farming” have been deemed CRAZY to say the least. Our very being here might seem crazy. Making this little piece of rocky hillside show a profit definitely seemed crazy…or a long-shot at best.

Those stories and many others have been rattling around my mind as I try to organize memories and essays into some sort of coherent and meaningful narrative in the continuing attempt to make some headway on my long-delayed book project.

Twenty-five years ago, we (or I should say Tom and a couple of helper-dudes) were putting up hoophouse #1 in one of our early “adventures” here on the hill. We had made what at the time seemed a huge investment in what was a seriously “crazy idea”. We knew nothing about hoophouses. Not how to build one, use one, or whether or not to write hoophouse or hoop house. Maybe hyphenated…should it be “hoop-house”? (I still don’t know the answer to that one)

We had no idea at the time that this hoophouse would become the single most productive place on the farm. Housing hundreds of chickens, growing a huge variety of crops, providing a subject of conversation for an entire season at the hardware store, allowing us to sell fresh greens year-round for nearly a decade…and becoming my “happy place” when things elsewhere seemed somewhat dark and dismal.

This week, we “re-skinned” the hoophouse, replacing the old plastic with a beautiful, smooth new cover. It seemed like a pretty big job for two somewhat broken-down old folks, and unbeknownst to me, Tom was dreading it. Maybe it was a crazy idea to think we could do this by ourselves. But, our completed job stands as a testament to teamwork and perseverance. Just like everything else around here.

I honestly don’t know when we did this job last.

Surely it wasn’t 2011 when I last posted pictures of the job. That really would be crazy. (the plastic is only rated for 4 years) I do know it had been at least a couple of years of us saying “we really need to do this job” and something else more pressing coming up…surgery, the pandemic, the year-long “kidney saga”. The hoophouse was full of holes that were covered with tarps secured by ropes. It sprouted a couple of new rips in this past spring, and we just hoped that the shadecloth would hold it together until a real repair was possible.

Because you don’t just pop some plastic over it and call it good. Well, I suppose you could, but living on our hill where the wind is always a factor, you’d be pretty sure of some sort of weather-related disaster. You need a warm-ish day so the plastic is somewhat stretchy and pliable. A tight fit is imperative for longevity. It also has to be relatively still. I don’t think I need to explain what might happen to anyone involved in such a venture if the wind got hold of a 70 x 30-foot piece of plastic. Like I said, I’ve never had any inclination for parasailing…

With those factors, finding the perfect day to do this somewhat daunting task is somewhat like finding a needle in a haystack. And, since we’ve aged considerably since the last time…Tom planned for a two-day event. No point pushing our old bones TOO hard…we might not finish at all. And, I don’t suppose I need to point out that a hoophouse without any cover is of no use to anyone.

First, I set about pulling down the morning glory vine in front. That may have been a not-so-good “crazy idea”. It grew like kudzu and threatened to take over the entire village of Mbrk. And, never had even one blossom. Then, we pulled off the old plastic. Since it was full of holes, this wasn’t too hard. But, where it was attached to the frame had stayed wet and warm for the duration and hundreds (maybe thousands) of bugs had met with their sad fate, resulting in some sort of primordial goo that had to be removed before the new plastic could be applied. Gross! While Tom set about other repairs, I attacked this job. The “jet” setting on the hose nozzle took care of the goo. But, that meant everything was soaking wet, so  we left everything to dry overnight. (fine by me, I’m here to tell you “primordial bug goo” is not a great skin treatment)

Applying the plastic was a job for teamwork. I held tension on the sheeting, and Tom installed the “wiggle-wire” that holds the plastic in place. The “wiggle wire” fits inside a track that runs along the perimeter and adds tension to the new skin. A couple of skinned knuckles and seriously achy muscles and we’re done! (we do need to make a dump run at some point to dispose of the worn-out plastic)

The new hoophouse skin is a thing of beauty. All clean and tight and completely hole-free. Here’s to a long, long life. Because honestly, that was WAY harder than the last time we did it. And, I'm not looking forward to a repeat performance.

In trying to find out just when we covered it last, I found myself rummaging through a lot of old blogs,
looking at old photos and being awed by just how much work we’ve done around here.

Because, somehow, we had this crazy idea that we could make this place work.

While we’ve downsized and changed course dramatically…the hoophouse remains my “happy place”…and perhaps one of the best “crazy ideas” we ever had.

The job got finished just in time, too. This weekend, the Valley is under a “freeze warning”. We’ve had a couple of light frosts already, but tonight is probably going to kill off any sensitive vegetation that remains in the field. So much for the flowers.

But, the plantings in the hoophouse will remain frost free…all we have to do is roll down the sides and shut the doors.

We can sit back and enjoy the fall (and even the winter) knowing the hoophouse job is complete.

With the first day of work behind us, I was gazing the birch tree just outside the kitchen door noting how it responds to the cooling temperatures with its lovely fall foliage, I got to thinking about another one of my “crazy” ideas…

When the house was completed back in 1997, it was painfully obvious that we needed some sort of landscaping. Desperately. But, landscaping is expensive, we were broke and there were far more important things demanding our limited funds. So, maybe someday…

Somewhere in my reading, I found an ad for a clumping birch for something like 5 dollars. I’ve always loved trees, any trees, but birch trees with their white bark and gold leaves against an October sky has always been a favorite. I envisioned that beautiful tree in our front yard. So, I found the five bucks and sent away for said tree.

To think I could get a TREE for five dollars was crazy, I know. But, I was looking to the future.

When the Post Office called to tell me there was a package, I had no idea it would be my tree. So I took a little walk down to the office. When the postal worker handed me an ENVELOPE (even though it was a fairly large envelope) …I was certain there was a huge and horrible mistake. As I walked back up the hill, I got more and more irritated. (I was certain I had just wasted five dollars) No way that was my tree!

But, inside there was my tree. Not much of a tree, mind you, but a tree, nonetheless.

We planted that little tree, consisting of three little twigs, in what we were calling our front yard, surrounded it with some big rocks excavated from the foundation and hoped for the best.

I didn’t hold out much hope when one of the little twigs succumbed shortly after planting. But, the other two twigs seemed to like it there. As it grew, we added some flowers. It made for a pretty little spot that the girls began to refer to it as “the oasis”.

And, twenty-five years later, I’m here to tell you that the white bark and golden leaves do indeed make a stunning view against the October sky.

I’ve got loads more of those stories…although I don’t want to give away my project by telling them all today.

But, about those “crazy ideas” …you should definitely trust them.

A Day In June 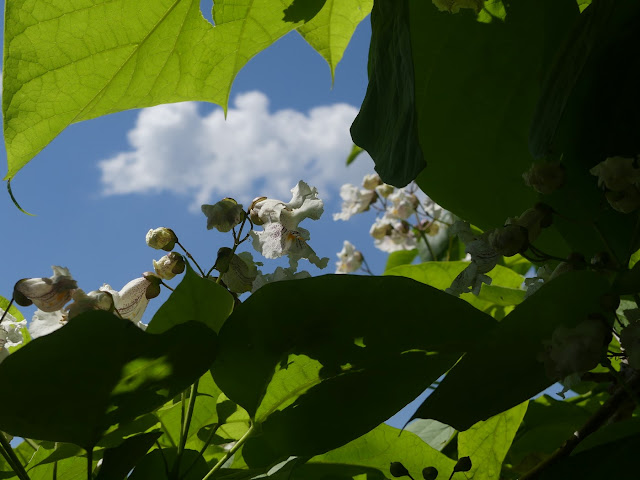 There is nothing quite like a beautiful June day…the brilliant blue of the sky, dotted with puffy white clouds that float by as the scent of freshly cut hay or the perfume of honeysuckle wafts through on the gentle breeze. Birds singing, flowers blooming…ah, yes!

This is summertime in all its golden promise, before the heat and humidity send us scrambling for a cooler spot and the bugs and garden pests cause us any sort of aggravation and discouragement.

This year first of June seems significant in another way…

We spent June 1, 2021 at the hospital waiting and waiting and waiting for the first surgery. (after his initial emergency room visit on mothers’ day and subsequent unsuccessful treatments) He wouldn’t be discharged until 12:30AM. (which made for a truly “interesting” trip home) This began the seemingly endless saga that included countless scans, visits to the Emergency room, surgeries and doctor visits. If he wasn’t IN a procedure, he was recovering, or awaiting the next one. It was an arduous ordeal, to say the least, with little opportunity to do anything else.

Eventually, he was referred to another surgeon at another medical center. This meant more tests and another surgery…that’s where we left off last month. He had the planned surgery, but they needed to wait a couple of weeks to decide what was next.

This time they were looking to see what the kidney function was after all the procedures and without the stent in place anymore. It was almost certain that they would not do the involved surgery that had been discussed (and the reason for going to the university specialist) but, there had been talk of removing the kidney, if it had failed completely.

Long story, short…the kidney is still functioning…although barely. But, there is no reason for any further surgeries. No kidney removal, no major surgery…he made it through.

When you get to the “we’ll just check on this in six months” stage of an acute health issue…it is cause for rejoicing, believe me.

So…June 1st this year is cause for some sort of celebration. Or at the very least a big sigh of relief. We did it! We reached the end of yet another saga. Now, maybe...just maybe we can think about other things for a while...

While we are in the odd place of adjustment to a life without the Market…still. We haven’t come up with any great and interesting new plan. (maybe we won’t) Between the pandemic and a year-long illness, things still feel unsettled and strange. The world in general seems a hostile and hateful place. However, there are still amazing things in the natural world that surrounds us.

It is said that being in nature grounds you…puts you in touch with yourself and the earth and just makes you feel better.

Where I can acknowledge this “one perfect moment”. Enjoy it. Savor it.

Come what may…the beauty of nature is always here…all around us…just waiting for us to notice. (or sometimes, not notice...like the deer, the bunny and the birds)

Thanks for reading! Have a wonderful day!