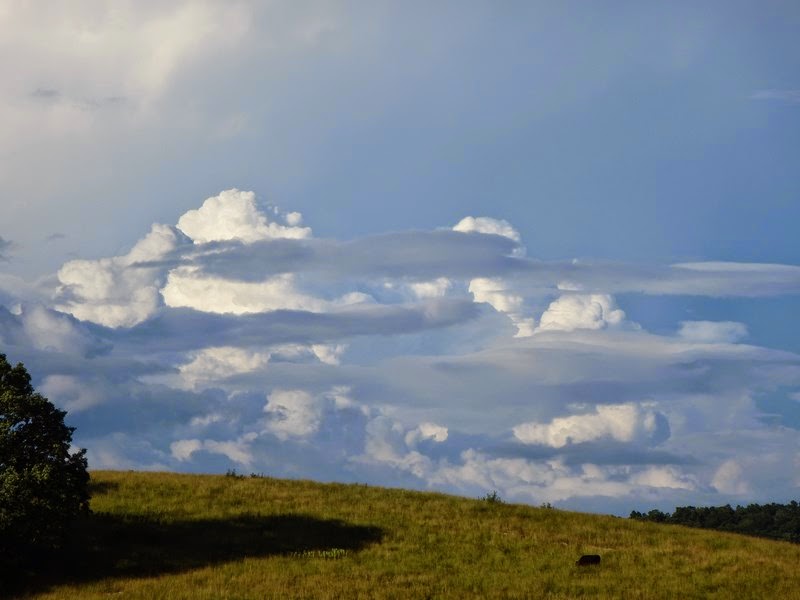 If time flies when you’re having fun…then, we must be having the time of our lives.

Oh, wait…I think we are.

It’s time to start thinking about some of those fall crops. (yeah, I know…we just started harvesting for summer!)

So, after I picked the last of the broccoli, the Boss took the bushhog to the spent broccoli patch, mowing everything down in anticipation of the fall potato planting, which I am guessing will take place next week.


All the chopped up plants will add some organic matter to the soil as they break down.  (which is good)  As the plants break down in the heat of summer, it also smells a little like kimchi or sauerkraut around here (which is not so good). But, at least it looks a little tidier.

Tuesday was scheduled to be broiler processing day, which went off with little difficulty.

But, when we were finished, I was sitting at my desk and heard a very loud CHEEP...CHEEEP….CHEEEEEP!

Apparently, one of the pool chickies had “gone over the wall” and was wandering around in the greenhouse trying to get back to his pool-mates. (the greenhouse is attached to the house on the office side) No worries…he was captured and returned to the pool.  Then it happened again…and again. Uh-oh! We had outgrown my wonderful solution a little more quickly than I thought we would.

That caused a chain reaction that meant we spent far too much time with CHICKENS this week.  The bigger broilers moved outside.  Ordinarily, this means that the little broilers move into the brooder…but, we are having some issues with the hens…and the pullets needed to be re-homed as well. You can read about the pullets and hens (and the Boss' horsetrailer chickenhouse here. After much discussion, many trips hauling chickens and a lot of brooder cleaning, we got all the chickens situated.


I take that back.  When I went out to check the hoophouse irrigation and close the gates for the night, about ten hens had taken matters into their own wings and were truly free-ranging (where they didn’t belong)
The Boss and Gus were called in to help with the round up. Surely, now the chickens are all situated!

Tomorrow, we hope to start resolving the issues with the hens. They have me so frustrated that I’m suggesting one giant chicken potpie. Since that’s probably not the best solution, count on a post about the old biddies somewhere in the near future.

The week also included working the lambs, LOTS of harvesting and planting about 200 brassica plants for fall.  (we have more, many more to get in the ground in the upcoming weeks) 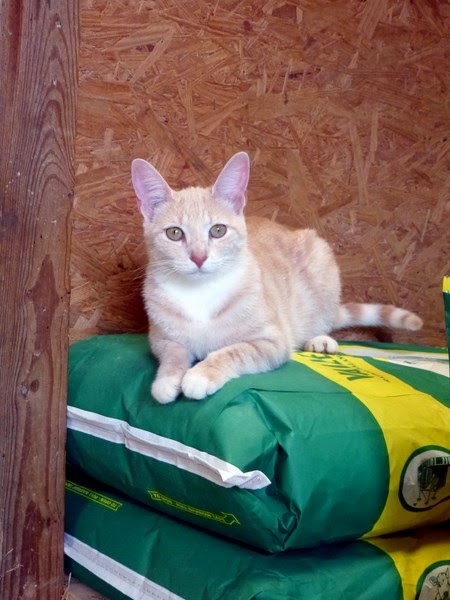 Tess and I narrowly escaped getting thoroughly drenched in Thursday’s afternoon’s torrential rainstorm.   You know how loud it is in a barn with a metal roof in a thunderstorm?  It’s LOUD!  I figured we’d just wait it out in the barn.  Tess, however, couldn’t stand all that noise in her enormous ears (read about Tess here) and made a mad dash to the relative safety of the front porch.  Torrential and loud, maybe…but, the rain was great for all the transplants. (and you never complain about rain!)


The week was topped off by our best Market day of the 2014 season.  The entire Market did well…it was crazy busy…and we had good music.  All in all a very good day!


It’s been a good, productive week…but, I'll admit it...I’m just a little bit beat.  Today, we’ll spend some time resting and re-charging (and doing the laundry…and, oh dear...look at all those ripe green beans!) and then get back at it again tomorrow.

Hope you had a good week and a very

Thanks for stopping by!  Come back and visit us again real soon.

Fresh From the Market – A Foodie Friday Recipe

The vegetables are finally coming in with great abundance.

So much so that my every waking thought seems to be focused on some sort of vegetable…harvest…or processing vegetables…or better yet, EATING veggies!  I may have even had a dream or two about vegetables lately. And that’s really okay, particularly since that’s how we make our living. 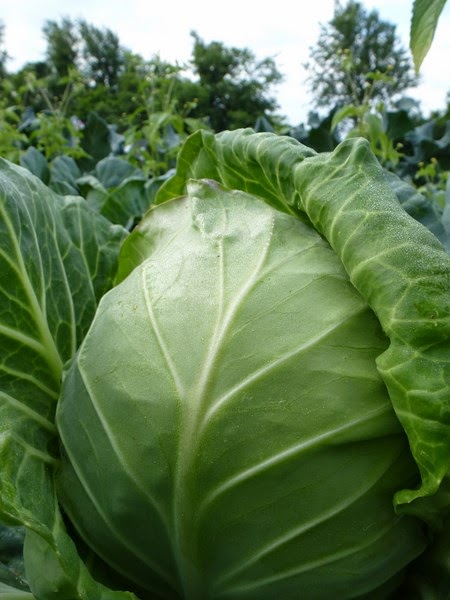 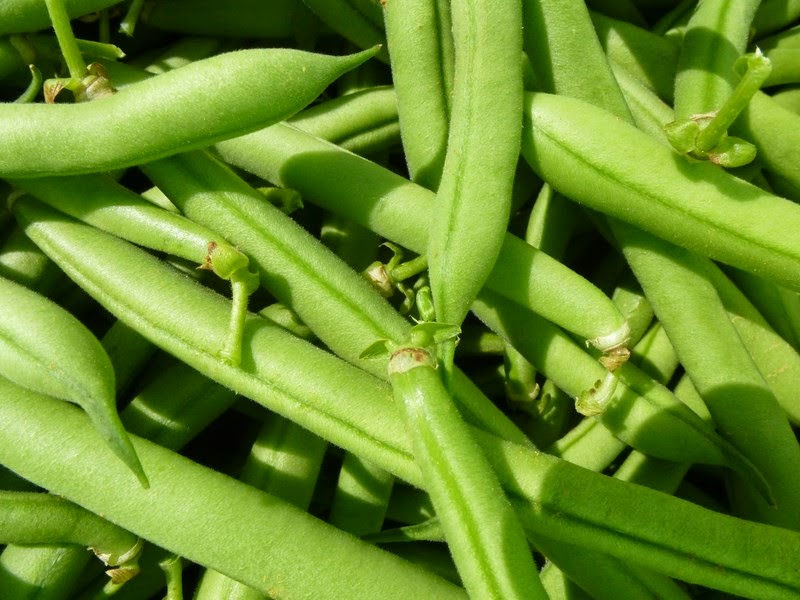 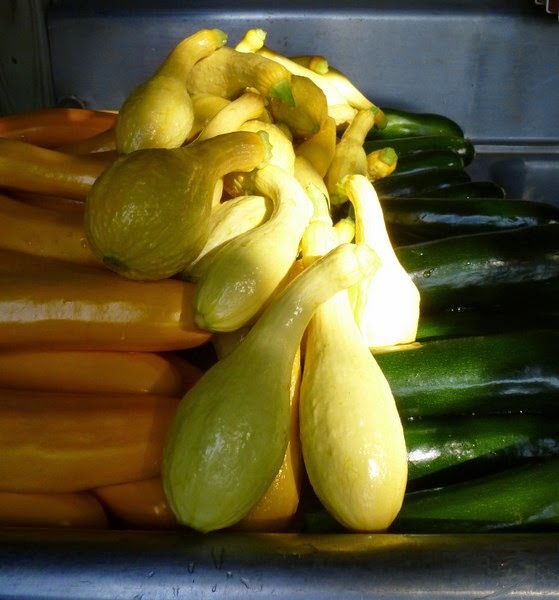 With the abundance in mind, and being incredibly short on time, I thought I’d just share a recipe with you that a Market customer-friend shared last week.  I know for a fact that you can get everything necessary for it at the Market (hint: if you’re local, visit us at the Staunton/Augusta Farmers' Market) and I can assure you that we did indeed taste-test it first. The food is a definite perk of this job!

…so, here’s something new to try for the weekend. 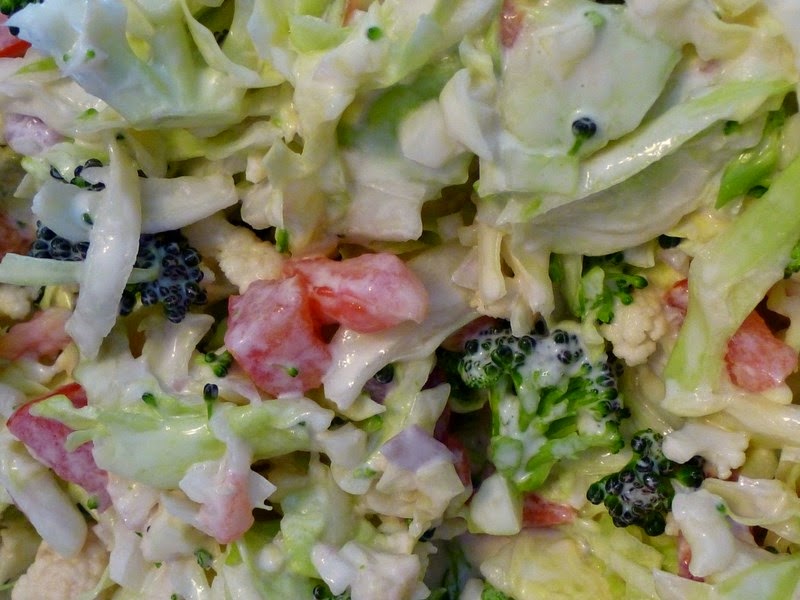 This slaw goes great with anything grilled, and is even tasty the next day for lunch.  (I’m all about the leftovers)

Thanks, Sarah B, for sharing!

Have a great weekend.

…and don’t forget to check out your local Farmers’ Market.

I'll be sharing this post over at  Tales of a Kansas Farm Mom's Country Fair Blog Party.  Go over and check it out!

Having a milk cow was the fulfilment of a life-long dream. There was joy and heartache…and LOTS of good milk and butter. I learned so much from my ten years as the owner/milker of cows. 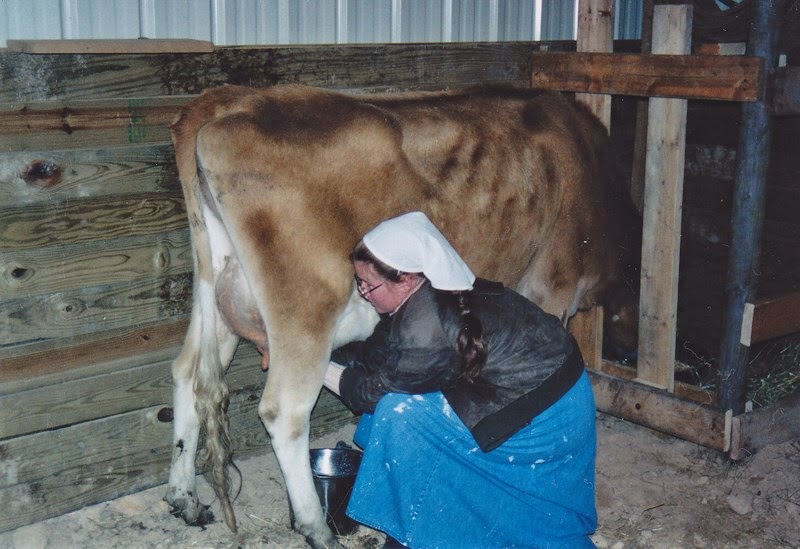 
Then, there’s the feeding and maintenance, the near constant cleaning of the barn…and healthcare and breeding.  Yes, I learned a lot in those ten years.   Dairy farmers have my undying admiration.

Because of the cows, we visited some most interesting farms, got to know the local veterinarians real well and met some amazing people. You should READ this one.

Life moves on and things change…and there aren’t any cows on the hill anymore.  But, we’ll always have the memories.

Despite the heat, it was a fairly productive week and we even made time for a birthday supper after Market.  The first of the “younger generation” reached the big 3-0 this week, so we all got together for supper, some family time and a movie…oh, and cake…and icecream. 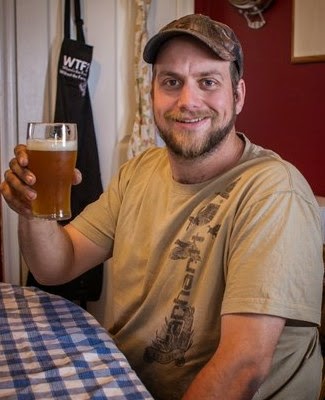 Happy Birthday, Josh!  We love you! 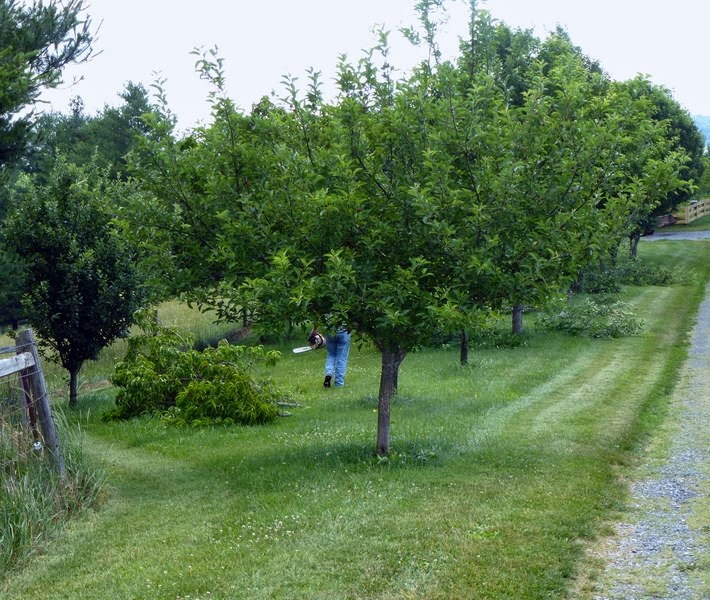 When I got home from the town run on Monday morning, I heard the chainsaw running.  There were branches everywhere, it looked like an orchard massacre.  The Boss had finally had it with the fruit trees dragging him off the mower as he cut the grass in the orchard.  The harsh weather caused a lot of “winter kill” and there will be little, if any, fruit this year.  But, the orchard looks nice and tidy now and he can mow without any “tree issues”.

I do have my doubts about the peach tree by the greenhouse, though.

We finally got Waylon shorn!  It’s always a toss-up as to who is more relieved to have that job completed.  Without a doubt he should be cooler, the fleece we removed weighed 10#!  No nicks or cuts, no injuries to the shearer…I’d call that a success.

…and point out that “Waylon is one big dude!” 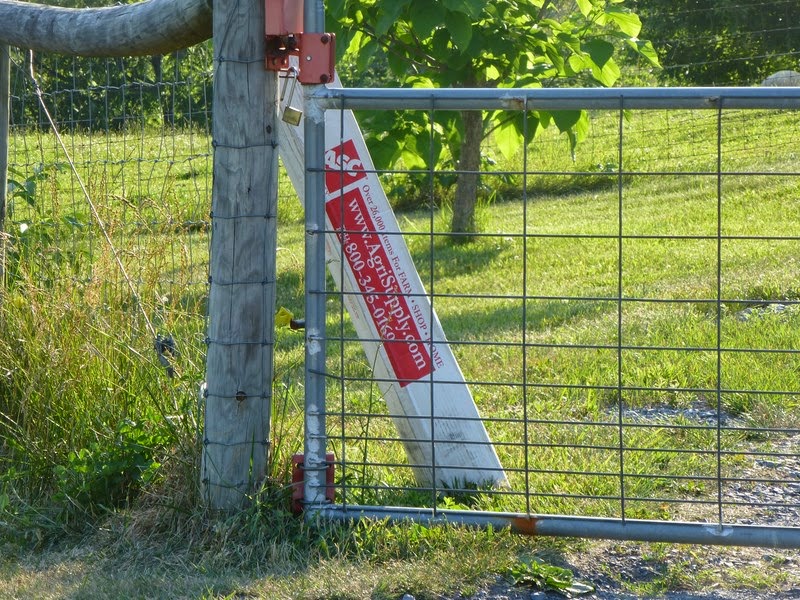 After a very long wait, the much-needed part for the tractor finally arrived.  For those of you, who like me, thought he could just pop it on, hop on the tractor and start using the bushhog…think again.

Repair and maintenance require a lot of knowledge and ability…and hard work. 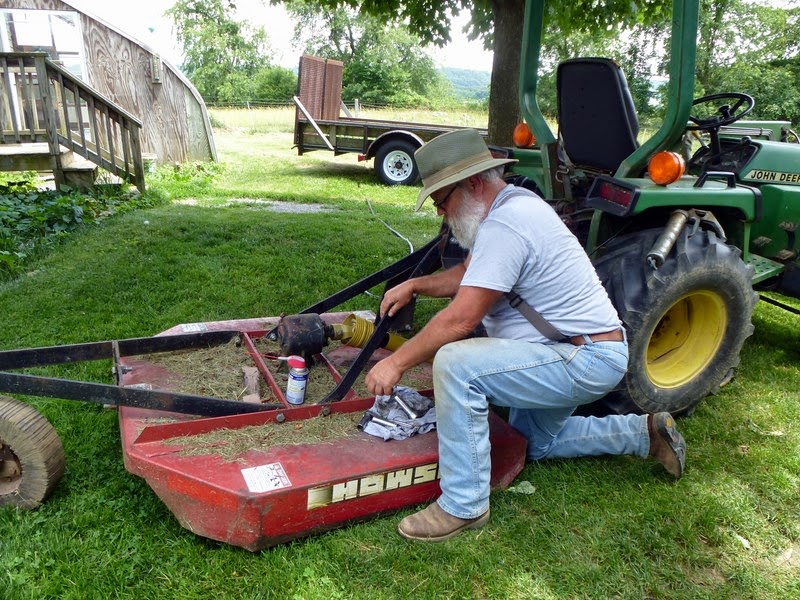 I’m just thankful the Boss possesses talent and ability and is able to keep this place running smoothly most of the time.  Looks like the bushhog (and the Boss) might be working overtime this week! 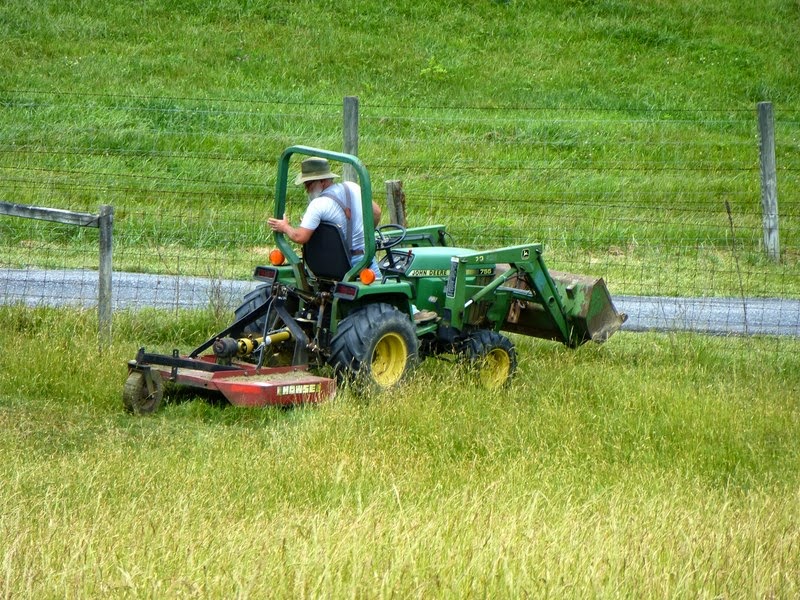 The garlic harvest happened this week, too.  While not as amazingly awesome as the "best garlic crop ever",  most of the bulbs were big and beautiful and will be joining the Market line-up soon.  The garlic crop was seriously affected by the cold, cold winter and the harvest was lessened somewhat.  The effects of the Polar Vortex will be felt for a long time, I think.

The bounties of summer are finally rolling in.  No, wait a minute.  Nothing rolls in around here.  It takes a lot of work to get all that produce to the Market and I ended up doing a whole lot of sweating out there in the bean patch.  …and all the evidence of my hard work was gone in under an hour!
So, I’ll be off to pick some more beans soon...maybe this afternoon. I love green beans and while I really don't like picking, picking beans always reminds me of one of the Boss’ friends from our “other life” and it makes me laugh.   Read this.

Occasionally, all the work of summer catches up with us…

It looks like this chick has been working way too hard!  It cracks me up to watch the tiny chicks.  They will scurry around, picking and scratching and cheeping…and then simply fall over and pass out.  They will sleep in the most peculiar places, in the most peculiar positions and then instantly wake up, seemingly completely refreshed, and go back to doing whatever they had been doing when overcome by fatigue. It’s really funny, or maybe I’m just easily amused.

The long, HOT week was capped off by a pretty amazing Market week.

At the seven o’clock opening, we were fully stocked with what one of our customers referred to as “the amazing, growing bounty of summer”…less than five hours later, this is what remained. (for the record, the Boss is not for sale! He’s priceless…)


Thanks for stopping by.  Hope you’re having a

We’ll spend the next week doing more of the same…along with a little broiler processing…and a LOT of praying for rain.

Please come back and visit us again real soon.