We survived the blizzard of '09 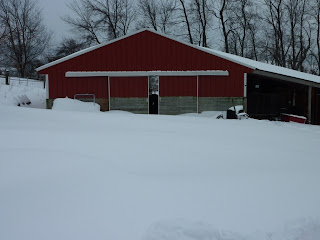 "hmmm, snow in the forecast....." That was my first thought on December 15, 2009 when my day began with the usual check of the weather. When you make your living on the land, by the land, the weather becomes a BIG factor. It's part of the neighborly greeting here in rural America. "hey, How are you? Hot enough? or Had any rain out your way?"

When I checked the weather again, there were INCHES of snow in the forecast! My morning greeting to Tom was "Dear, there's SNOW in the forecast!" As the week progressed, the predictions became more impressive. Uh, oh....the "big one" the old timers had been saying we were due.

We made arrangements at the barn. We brought the ewes in, put the steer in a stall. We ran some extra water (never know when you may lose power) checked the generator, covered the crops in the greenhouse, checked supplies. We watched the snow begin....well, we were ready.

But, how about that vegetable delivery scheduled for Saturday? How about the steer headed to the processor's on Monday? Oh, it's just snow....we've got 4-wheel drive...nothin' to it!

HA! When the snow finally stopped falling, the local report was 25 inches! We haven't had snow like that in YEARS! So many years that I can honestly say....I've never seen snow like THAT before (not here, anyway)

Now the fun began....the big dig out! Once Tom got to the barn and got the tractor out, the enormity of the task became evident. Oh, were we glad to see our neighbor with his backhoe and BIG tractor! All three working made short work of the driveway and a track to the barn. Now to get out to all the animals.

It took ten minutes to haul a bale of hay about 100 feet to the ram. I was amazed how completely exhausted I was when I finally got there. WHEW! All the animals were fine and well-fed.

It is now 10 days after the blizzard. There is still snow on the ground, the animals are still in the barn. But, we got the steer out of here and the vegetable delivery done. We made it!

visions of lamb chops danced in their heads.... 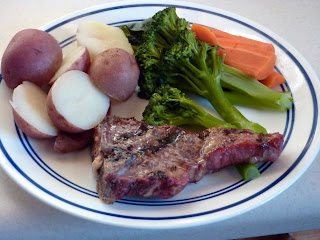 **warning to my vegetarian friends...this blog contains mentions of meat and the enjoyment of eating it!**

When we began raising sheep, it was to have a some variety in the meat we ate. We were raising cows and chickens at the time, and the sheep seemed like a manageable addition. However, when we walked in the barn to pick up one of the lambs we had gotten for a "real bargain", I realized that this one was not headed to the freezer. No, somehow, we ended up in the sheep breeding/raising business....and this without ever having had a homegrown lambchop! I have no idea what we were thinking.

We got some more sheep, Tom and Amanda learned to shear. (that experience is worthy of it's own blog entry) The girls learned to spin, knit, weave and crochet. I began to understand veterinary medicine by necessity. We learned a LOT, and learned it the hard way. We even came up with a family saying that will live on in infamy. "....learned a LOT on that sheep, Tom...." Birth and death, illness and robust health, all took on new meaning once we started being shepherds.

When the meat was finally harvested, we felt a real sense of accomplishment. It was delicious...but, it was SO small! hmmm, back to the learning part of this experience. We found that you can't do it all. If you want wool, you don't necessarily get meat. We changed breeds, we learned more about nutrition. 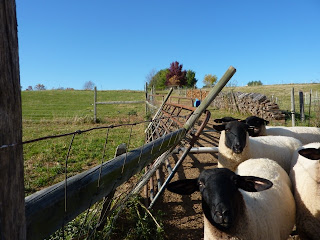 It was a beautiful October Sunday afternoon....we were getting ready to enjoy a nice supper after a relaxing day. But, it was not to continue.
Dude, the ram, is almost 300 pounds of muscle and testosterone. His one job of the year is done, and he is NOT happy about that. He plowed into the fence, took out two or possibly three fenceposts. The real reason is still unknown. Maybe he was bored, lonely...most likely hungry.
He was easily taken back to his paddock, following the food bucket.....he LOVES to eat!
Tom can add fence repair to his ever growing to-do list.... Just another day in paradise!
Posted by Barbara at 6:33 AM No comments: 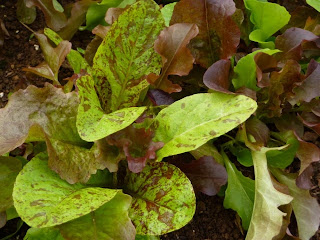 Mixed lettuce is one of my favorite things to grow. It is beautiful, with its wide variety of colors and shapes. It is delicious, and nutritious. But, one reason I love it has nothing to do with its food value. No, it brings back one of those sweet, childhood memories that somehow shaped my life....especially what I presently do for a living.

When I was about six years old, we went to visit some of my mother's friends. Growing up in rural Virginia, any summertime visit included a trip to the garden. This provided a chance for a little braggin' for the gardener, and a learning experience (although no one thought about it) for the visitor. The folks we went to visit were old-time gardeners. The type born with a green thumb, no doubt. A trip to the garden was like a visit to some type of wonderland. You could actually see the love and dedication in the straight rows, the weed-free plantings, and the abundant crops.

This particular time, the item that caught our eye was lettuce. Huge, green, frilly lettuces. I had never seen lettuce growing before. These were prime specimens, too. They seemed as big as beach balls. Nothing would do but we must take one. Mr. Payne insisted! He cut one with his pocket knife, dispatched his wife to the house for an ice cube, and took us to the springhouse to cool it in water. I watched and listened as he rubbed the icecube over the stem end. He said that if you cooled the sap and stopped it "bleeding", the lettuce would stay crisp and sweet. He must have been right, because I still remember that lettuce being the best I ever had!
Today, one of our specialties as a farm is lettuce. We grow a number of types and a variety of mixes. It is quite popular. Somehow, that goes back to a man who shared his love of the garden with a little girl eager to learn. Isn't that great?
Posted by Barbara at 4:42 PM No comments:

October at the Market 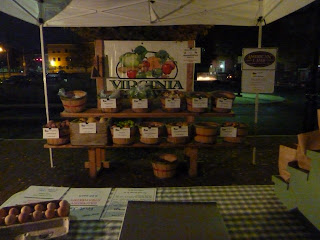 This is REALLY what 7 o'clock, opening time, looks like at the Market. The light in the photo comes from a Coleman lantern off to the side.

Saturday, October 17, 2009, was cold and damp, and for the first hour, DARK! This is the time of the year where it becomes obvious which vendors do this for "fun" and which ones are truly full-time. It was especially bare at the Market this week, because there was snow in the forecast. A lot of customers stayed in because it was so cold. On the way into town, I found myself wondering WHY we chose to do THIS for a living!


But, out of the darkness, the faithful came. It was so dark for my first sale, that the solar calculator didn't work. The sun made a brief appearance, the customers came and bought. We had a good day!

I was humbled by the number of folks who thanked us for being there. My response was to thank THEM for coming!! It is great to do what you love!
Posted by Barbara at 6:07 AM No comments:

While most people are complaining about the cold, drizzly, rainy weather we are currently having, we are SO happy for the moisture...happy for the change in seasons...happy for the opportunity to get caught up on the "inside jobs".

The rain day also gave me the chance to set up a blog for the farm where I can write about the happenings here at Homestead Hill. But, wouldn't you know it.....when I get the chance to write...absolutely NOTHING is happening!

Give it time. That will surely change!
Posted by Barbara at 11:59 AM No comments: