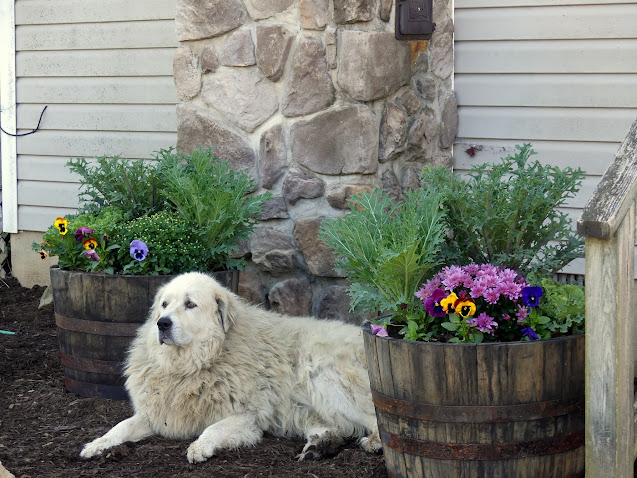 There was no mistaking that smoky, boozy scent. It was faint…and slightly stale, but definitely JD…

But, that made no sense…how? Why?

Tom gave up alcohol after his scary diagnosis years ago. https://homesteadhillfarm.blogspot.com/2017/03/sunday-walkabout.html  And, while 2020 has thrown us more challenges than ever imagined, I have not resorted to day-drinking. (yet)

It wasn’t until my eyes caught the “Lynchburg, Tenn” stamped on the bottoms of the newly arrived “planters” for our farm beautification project that I remembered that they were actually WHISKEY barrels…and there was no denying that they had definitely served their purpose. And, when he cut drain holes in the bottoms, the shop really smelled like a brewery, or more precisely a distillery.

Odoriferous as they were, the whiskey-barrel planters are the latest in our attempt to tame the side entry way.

Over the years we have tried everything.

Our first attempt was an old-fashioned garden, started from seeds…which quickly became overrun with weeds and the only solution was an attack with the weed-whacker. Then, when our youngest daughter got involved in fiber arts, a dyeing garden was attempted. Note: I did say DYEING…not as in dead flowers (that would be gross) but, as in flowers and herbs for creating lovely natural colors for yarn. There was some measure of success, but again the weeds took over and again…the weed-whacker. I think we tried a couple of other things…lilies and rosebushes were the most recent attempt…but, the madder from the dye-garden kept returning, in the most peculiar places. Its scratchy, vine-y growth habit started to choke out the other plantings, and it was a breeding ground for invasive bug species. With all the rain this year and two gigantic dogs who like to make nests for sleeping, it was a horrifying mess. The dog-nests became ponds with every thunderstorm and I was fairly certain we were now raising mosquitoes. And, we had to walk through it all every time we went in the house. Something had to be done.

Forget the weed-whacker…it was time to get brutal. Call in the heavy equipment.

Tom tore everything out. Everything. I think we may have finally gotten all the madder roots. (only took 15 years) Not willing to take any chances, we put down weed-blocking fabric, then we went and got the first load of mulch. Oooh…this looked so NICE! To prevent dog-nesting, we put down cattle panels on top of the weed-block and thin layer of mulch. Then, we got another load of mulch…no, two, before setting the barrels in place.

Then we went back to the nursery for a big load of plants. Now it REALLY looks nice! Grow, little plants...GROW! 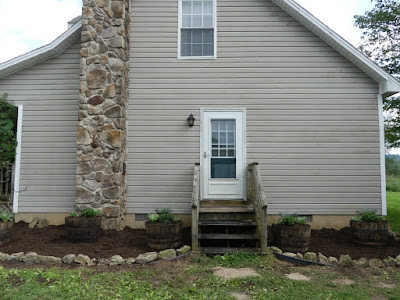 This project isn’t finished by a long-shot. But, the rest can wait until Spring. We’ll get some brightly colored pots, some cottage-garden type plants and maybe a bit of statuary. And, hopefully, without the weeds and the dog-nests, it will stay looking nice for a while. (and, I guess in the spirit of full-disclosure, I should point out that I mostly watched this whole process, although I did do the planting---and yes, Gus is STILL sleeping out there!)

With that job out of the way, Tom started on the up-cycling/re-cycling project that he had been planning for quite some time. He envisioned the former Market trailer as a “new and improved” henhouse-brooder.

He cut some holes in it, fashioned some windows, bought a snazzy new electric door and installed some nest-boxes. He only hit one major snag when he discovered major water damage inside one of the doors (actually all the doors have some issues, that one was just the worst). So, despite a little extra cost and at least 2 extra trips to Lowe’s, another project was checked off his to-do list. 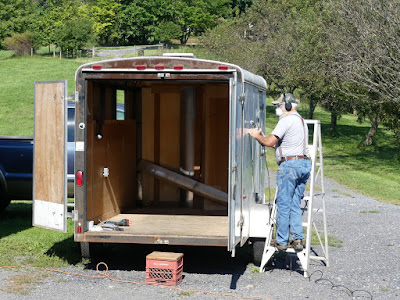 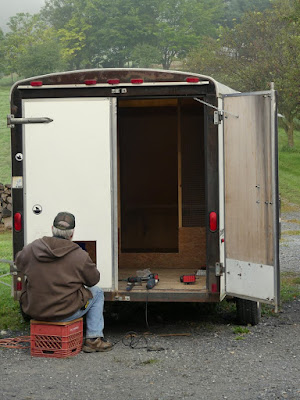 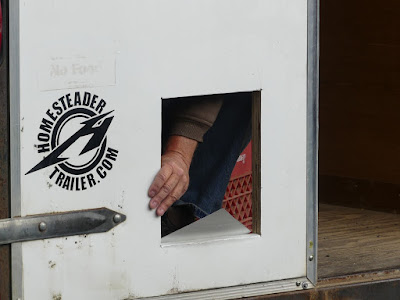 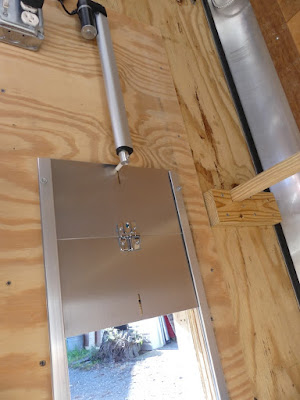 The hens moved in with little difficulty and the old trailer henhouse was hauled away. Since I’m trying to be positive, I suggest we overlook the fact that one old hen met with disaster underneath the automatic door. (a new sensor seems to have eliminated that deadly issue) 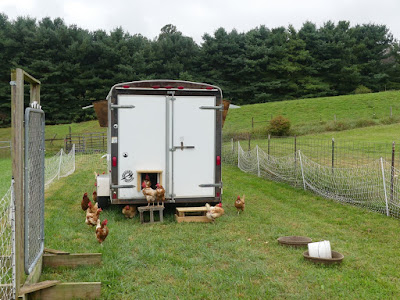 We have day-old chicks arriving next week. Since chicks come through the Postal Service, I will be crossing my fingers until they are safely tucked into the new brooder side of the trailer. And, the circle of life on the hill will continue.


That whole circle of life, change, renewal, impermanence and longevity have all been on my mind of late.

We observed our 36th wedding anniversary recently. That seems like such a long time…who am I kidding…that IS a LONG time. (and I feel every year of it and then some all too often)

I’m certain that if anyone had asked us way back then what we would be like at this point…our description would have been way off the mark.

But, then WHO could have envisioned the current state of affairs?

The county is falling apart politically, socially, and quite possibly economically. People are rude and angry  and out of sorts…we are facing a global pandemic the likes of which has never been seen before…

If you have any doubts about the sad state of affairs, this Dan Balz article from the Washington Post details it all (as of 10/3) calling it the “annus horriblilis”. (sounds about right to me) https://www.washingtonpost.com/politics/a-pandemic-a-crushed-economy-racial-protests-and-now-a-president-with-coronavirus/2020/10/03/be7934d4-0586-11eb-897d-3a6201d6643f_story.html

Current affairs have me seriously wondering WHY I should take the time to write anything. I mean, isn’t everyone focused on the events of the day, that seem to take chaotic twists at the drop of a hat…it’s becoming exhausting. And I most heartily concur with Alexandra Petri…

2020 has been a brutal year in so many ways. And, we have not been directly affected by COVID…as of this moment, we have remained healthy and so have our children. But, the overwhelming sense of loss and change have hit me right in the solar plexus. I am not exaggerating when I say that I have struggled greatly.

And, then I wonder…in the midst of all the loss and change and complete uncertainty…about absolutely everything…who am I to think that my stories and my troubles count for anything? Why should anybody care what is going on in my little corner of the world? (I know this is baggage from childhood when I was repeatedly shushed and hushed and told that I was unimportant and should be “seen and not heard”….some part of me struggles to put that mistreatment behind me) but, at the same time  something makes me keep typing…if for no other reason than to record the things that are affecting the world and my sanity. I must say, the list seems never-ending.

So, I really shouldn’t have been surprised that we had to cut down the maple tree in the backyard…chalk it up to 2020. While that seems to be standard practice and a bit of a joke, it really isn’t funny anymore.

I know I personalize far too many things. I know I have “hang-ups” and “issues” and my view of reality is perhaps more than slightly askew. But, that tree…I loved that tree.

It added a feeling of permanence to this little farm on the hill. It was part of what made this feel like home.

When we moved to the hill, there was nothing here. Nothing.

We bought this windswept hill because it was the last thing on the list of things we could possibly afford, we were heartsore and broken (not to mention broke) and we were just desperate enough to find potential in a little hilly piece of land without so much as a twig near the house-site. Did you read this? https://homesteadhillfarm.blogspot.com/2018/03/look-willow-tree.html

So, at some point in the dim and distant past, we made a trip to a friend’s property on Little North Mountain and tagged a few trees for transplant. Dutifully marking them so that they would have the same exposure here, we planted them in various spots around the farm. One by one, they died.

Except for the maple in the backyard.

It thrived in its somewhat sheltered spot just beyond the kitchen window. It gave me hope to watch it get taller as the seasons changed. I took photos of the progress of the tiny helicopters in the spring and the gorgeous leaves in the fall. Birds and critters found comfort in its branches and its shade dappled the kitchen counter as I prepared meals.

I always thought of trees with a sense of permanence. The oaks around my grandparents’ home had always been there…they were a part of the landscape before their house was built and may well remain today. The thought that any of our trees wouldn’t be here forever never crossed my mind. But, trees have a life expectancy, maples being far shorter-lived than oaks, and can be subject to disease and disaster.

A number of years ago, the leaves on our lovely maple tree began to look odd. Seeing similar issues with other trees elsewhere, we figured it was some environmental thing and brushed it aside. Later, other signs of ill health were observed.

A local arborist offered little hope, but would try pruning it first. When the pruning appointment arrived, the tree had worsened and the decision was made to cut it down. In under an hour, they chopped it down and chipped it up…and drove away.

When the maple was cut down, evidence of some sort of fungal disease was revealed underneath its bark. It’s demise was inevitable…and we can be thankful that it is gone before it fell on the house, creating yet another problem. Maybe if we had known sooner we could have saved it, I don’t know. It was too late.

…and now it is gone.

I thought my heart would break when I walked in the backyard for the first time. I actually had to leave the premises because the emotions were so overwhelming.

I was crying over a tree.

Wait…I was crying over a tree? (I told you I have “issues)

In reality, it wasn’t the tree…or at least it wasn’t JUST the tree. Everything has changed since we planted that tree. Our life, our livelihood, our friends and family, the community, the world.  This year has been weird and upsetting and full of loss. Even though we don’t think we have been directly impacted by COVID…we have. We all have. What we counted on as normal and stable is gone. Much of it was built on a faulty foundation and like the tree couldn’t continue the way that it was.

The pain of losing it is more evidence that life is changing, my world---my realm of influence, if you will, is shrinking or shape-shifting or something.

In some way, this is simply a microcosm of the world…

Everything seems to be shifting and changing and it all feels raw and weird and frightening. Change is imminent, and in many ways necessary.

And, I don’t know that I have any solution. Or even a suggestion, for that matter.

Tomorrow will come, we will adjust, make a plan…find something to do…we may even plant a new tree in the back yard.

Because Life goes on…

Here is the full quote from poet Robert Frost from “this week magazine”  September 1954. (still applicable even now)

“In three words, I can sum up everything I’ve learned about life. It goes on.  In all the confusions of today, with all our troubles . . . with politicians and people slinging the word fear around, all of us become discouraged . . . tempted to say this is the end, the finish.

But life — it goes on. It always has. It always will. Don’t forget that.”

…and that’s where I’ll leave you today.

Hang in there, people…we’re all in this together. 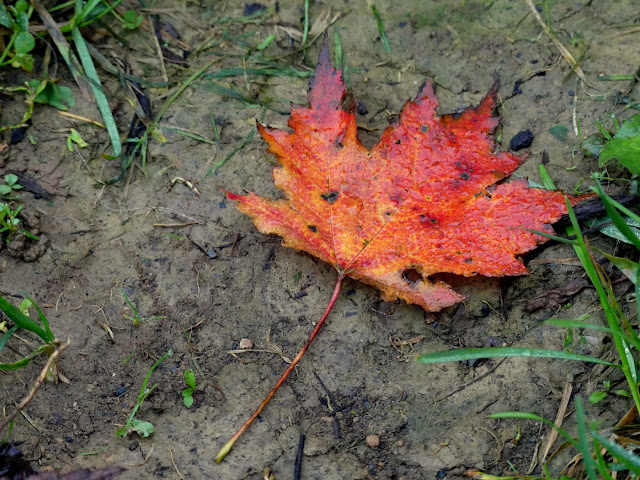 …and have a Happy Sunday!