The Rhythm of the Seasons 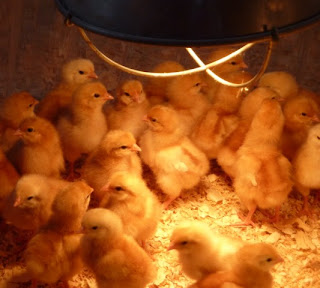 As I was waiting for Shirley, the "post office lady" to scan the box of layer chicks that had just arrived at the Post Office, I got to thinking about the sameness of things...

It's October...and around here that means: planting garlic, getting layer chicks for the following year, cleaning up the gardens, harvesting all but the most hardy of crops, cleaning out the chimney, taking the ram out of the ewe pen, planting the winter crops in the hoophouses, and taking the first steps to "get ready for winter", among other things.

These tasks are a given every year. Each month can be identified by the jobs going on around the farm. I have pictures from several years, and except for some minor differences, it's the same job, the same time of year. That can be comforting, or it can become monotonous. I choose comforting.

The past six months the farm has not been the focus of my life that it generally is. Helping our daughter through the recovery process following a potentially life-ending wreck at another's hand was far more important. But, now that my focus has been able to somewhat return to normal, it is reassuring to see that for all the differences...things are still "sorta" the same. The predictability provides comfort despite world events, personal trauma, and other issues. I find that so reassuring.

On to November...and the comforting tasks that it brings.
Posted by Barbara at 5:41 AM No comments: