The day started in just about the crappiest way possible…facing death in the darkness. I just hate that!

We’ve been (okay, I’ve been) eagerly anticipating lambing season since we put the ram in with the ewes back in August. There is something about walking in the barn and hearing the lamb voices that is just so cool! The mamas “talk” to the newborn lambs right as they are born. This is a form of bonding, I suppose. Later in the season, one mother will call and her babies will respond…only her babies.

We are having a cold spell this January, and we’re lambing earlier than in the past. The plan was to get lambs on the ground and growing in early January. This allows them to get some good growth prior to weaning them and turning them out on grass. At least that’s the theory. We didn’t count on the “coldest January since ’85”!

We’ve been doing this long enough so that I think I’m pretty good at predicting the birth times. I feel I’m a pretty good diagnostician and know what to look for to prevent problems, as well.

Generally we use a marker on the ram. This makes timing real easy. The ram jumps the ewe, leaves a mark, and I note it on the calendar. Then I count forward 150 days, and viola! Lamb birthdays! There are also a number of physical signs I look for and know pretty well when things are going to “happen”. This past breeding season, for a number of reasons, we didn’t use our marker. This is making the prediction part of the job much more difficult. To compensate for this, I just check on “everyone” far more often.

The first two lambs arrived fairly easily. I did help the first ewe, as she seemed to be tiring. Her baby was quite large, and Tom dubbed him “Fatso”. We try NOT to name the lambs, but occasionally, something just sticks. It is usually the weird and random…that would explain the lamb named “Rover”! (Rover was quite selenium deficient when born, and “down in his pasterns”. This made his feet splay out like a little dog. Hence, the name, which requires an explanation now that he looks like a normal lamb.)

Back to the story…death in the darkness…

I had checked everyone at 3am. One ewe, an older girl with experience, was looking kinda like she MIGHT do something…sometime. Nothing terribly imminent, so I figured I could to go back to bed. I figured: experienced ewe, no wind, not real cold, no problems…wrong!

When I got back at 6am, things were definitely wrong. She had birthed the lambs, recently it appeared. She was making no move to care for them. One was obviously dead. The other….sorta alive. They were still wet, so I began the drying off job. I was hoping that all the rubbing would bring back circulation, and things would look better. Nothing, not even mouth-to-mouth resuscitation, brought results.
Totally bummed, and really cold, I carried them to the house, still hoping I was wrong. Unfortunately, I was not.

There were other things to do that day, so I didn’t have too long to brood over it. We hauled hay for half the morning, and when we came home for lunch…there were twin lambs! (from a different ewe) These were all cleaned up and vigorously enjoying their lunch when we walked in. Whew!

There are a lot of times when we don’t have the answers. Sometimes that’s very bad. There are times we find ourselves pleasantly surprised, too.

This place has seen a lot of living and its fair share of dying in the time we’ve been farming. I will not lie and say it doesn’t sometimes take a toll. I have cried longer and harder, and worked longer and harder, and found myself doing things I didn’t think I could do, while living and working on this piece of land. I would hope that each of those experiences has made me a little wiser.

There are days when we look at each other and say “WHY? Why do we do this?” We ask the question not to find a way out, but to give each other a new focus. Because the answer to the question is…..”We wouldn’t do anything else! This is our life!”

So, despite the bad start and the unexplained incident, the day went on….and we found some consolation in the new healthy lambs, and the possibility of more. The good times far outweigh the bad, and as a friend pointed out that day….we learn SO much from the tragedies! Despite my retort of “well, I’m content to be stupid for a while!” …she is absolutely correct.

I have heard it said that farmers have the most faith of any one group of people. The hard times, frustrations and life lessons make us better shepherds, better farmers, and just maybe…better people.

Kinda makes me wonder what tomorrow will bring. 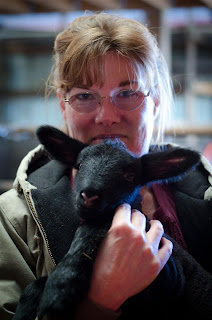 Posted by Barbara at 3:33 PM No comments:

Some Folks have ALL the fun!

Last night, as Tom and I set off to the henhouse after dark to treat the house and birds for mites, I got to thinking about how many times we’ve been out to do odd farm work in the middle of the night.

We’ve met the vet at the barn at 2am to fight a horrible case of milk fever in one of the cows. We’ve left the barn at midnight after spending a couple of hours getting a stuck lamb out of the mama, successfully, I might add. We have set the alarm clock so that we could go beat snow off the hoophouses in the middle of a blizzard. These are some of the highlights. This list doesn’t include the multiple barn trips during lambing season, the time the power went out and we had to rescue all the baby plants from the greenhouse, or the time a neighbor called to say a bear was headin’ our way… “better round up the sheep”. Boy, do we have fun, or what?

That doesn’t even account for our “odd and random” and just plain WEIRD daytime activities! That's a subject for a whole 'nother post (maybe a series of posts)

Fifteen years ago, our life wasn’t nearly so crazy….or maybe it was just much duller.

Back then, Tom was a career substation electrician at the power company, and I a homeschooling mother of two little girls. Homesteading was just a passing fancy. Supper was always at the same time…and so was bedtime. We didn’t have much worry about variation. Gardens and critters hadn't taken over our lives....yet.

A chance remark at a Thanksgiving dinner caused us to rethink our lives. Shortly thereafter, we had sold off a whole bunch of things (including, but not limited to….one car, our home, and a LOT of personal belongings).

Once in the Valley, things changed again. The plans we thought were a sure-fire thing….were NOT! Suddenly, we were “homeless” and house-hunting with two small children in our pick-up truck. Forty days in the “wilderness” transformed our lives yet again. (Believe me, I can relate to the children of Israel, because it felt like 40 years!) Through much prayer, driving and looking at properties…we found Middlebrook. (we owe a debt of gratitude to a certain real estate man, too!)

The once empty sheep field was quickly transformed into our homeplace. A house, garage and barn rose from the landscape. Gardens, greenhouses and orchard followed in short order.

Many of changes have transpired over the years. A farm is ALWAYS a work in progress!

Right now, we’re anticipating lambs. That means a check at 10pm, and on very cold nights, another at 2am. The first check of the day takes place at 6am. I have certainly seen more starry nights since becoming a shepherd than ever before. It’s beautiful out there in the middle of the night, really beautiful. Personally, I could do without the distant coyote wails…..but, we do live out in the country. That goes with the territory.

Most nights when I head out to do the odd farm job, I am so very thankful for that chance remark at Thanksgiving all those years ago. Because of it or in spite of it….Tom and I got “the chance of a lifetime”…we are living the good life…on this good land.

And, believe it or not…it IS fun! 
Posted by Barbara at 5:38 PM No comments: 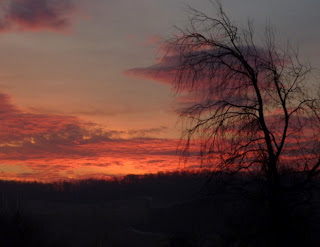 I have been promising myself for a long time that I would begin to "blog the farm" on a regular basis. As today is the first day of a new year, it seems an appropriate time to begin. I'll just keep hoping for the self-discipline to continue!

This time of year it's hard not to hibernate, especially on the cold and dreary days. But, the anticipation of the impending lambing season, the monitoring of the greenhouses and hoophouses, and the many and varied maintenance projects do provide many options for activity.

We generally get all the gardens planned prior to the end of the year. The seed and plant orders are placed and the waiting begins. The first seed order arrived by UPS the other day, and today I will sort and file the seeds in anticipation of their planting. According to the calendar, I should be starting some crops next week. That means a day of cleaning and organizing the greenhouses is in order. (in between my trips to the barn to check the "maternity ward")