For the Love of Bacon 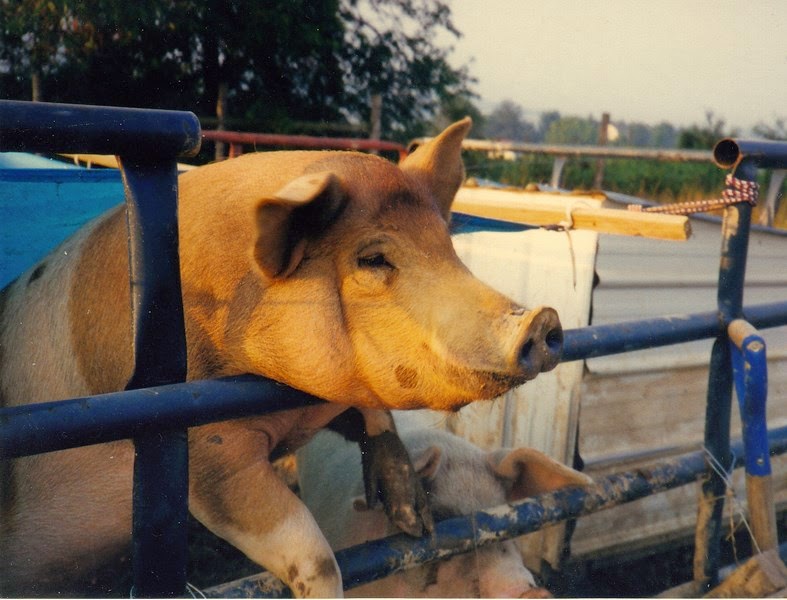 Pigs are intelligent and amusing. Pigs are…

…okay, I guess the real reason I love pigs is BACON. (and ham, and sausage…)

But, this post is not really about food.  Although, FOOD is the real reason that we started raising animals in the first place.  On a homestead, it’s all about self-sufficiency.

When I was a kid, dad raised hogs on a very small scale. You might say that pigs started my Ag learning experience. Read this. We even did a neighborhood hog killin’ one year, complete with lard rendering and ponhoss making. (ponhoss is a dish made from meat scraps and cornmeal…also known as scrapple…and it is DELICIOUS)

The Boss and I had raised some hogs at our old place with limited success.  The raising went well, the processing did not.  We learned that it is imperative when having animals “processed” that you find a superb butcher or learn to do it yourself. Keep in mind if meat if offered for retail sale, it must be processed in an USDA-inspected facility.

We decided to try again here on the hill.

But, we had forgotten about Frosty.

When we first started talking to the farmer about obtaining Frosty, the milk cow, it was mentioned that she did NOT like pigs.  Information filed away, we went on with life.

We didn't give it another thought...


Until Frosty met those piglets.


Now, keep in mind they’re piglets.  Maybe 40 pounds each.  Piglets, burrowed down in the hay, grunting little piggy snores as they dozed. They were really cute and could not in any way be considered a threat.

Frosty apparently smelled those piglets from outside the barn. Or maybe she heard them snoring. She stomped inside, looked in the stall and BLAM! butted the gate.

The piglets woke up and squealed.

Frosty was having none of that!
BLAM! BLAM!  She butted the gate again. The piglets squealed again…and again.

Why does this stuff ALWAYS happen when the Boss is gone?

I began to wonder about those pioneer women who managed to keep the home fires burning with little difficulty while the men were gone for days.  Around here, in those early days, every time he was gone, some sort of disaster seemed to strike.

BLAM!  Okay, this was seriously getting out of control.

I ran Frosty out of the barn to a new spot of grass, hoping that she’d forget the pigs. Since this was the early days, we didn’t have all the gates and fencing we do now, I could only hope she would graze away from the barn.

A short while later she was back, butting the gate and pawing the earth. Oh, why didn’t he come back home?

Before I could come up with a plan, she butted the gate again. This time the hinge popped and the gate swung free.  One of the frightened piglets shot through the opening, hightailing it to safety...or freedom.  Whatever...he bolted for the wild, blue yonder.

All I could see was tiny, pink, piggy ears as he galloped toward the tall grass at the back of the property.

By this time, I was more than a little aggravated, and I was NOT going to let that pig get away.
We couldn’t afford the loss and it was headed toward the neighbor’s. (the neighbor who had stated emphatically her very real hatred of pigs) Leaving the girls to tend the piglet in the barn, I began running through the tall grass after the escapee.  Did I mention we dressed “plain” back then?  Headcovering and long skirt flying in the breeze as I ran, it must have been a sight to behold.

Oh, yikes…here’s the electric fence. I came to a screeching stop like you see in cartoons. What now?

Stop. Drop. And roll. Yeah, I know that’s what you do if you happen to catch on fire, but it was my only option in this case. Under the electric fence…where’s the pig?

Of course, by now he had gotten to the furthest spot on the farm and he was tired. (he was just a piglet after all) and the stressful situation had him panting and wanting to lie down. Yeah, me, too, buddy, me too!

So what to do?

Pigs are notoriously hard to handle.  With no fur to grab onto, they’re slick and wiggly.  They’re also one solid mass of muscle.  One of the biggest shocks of my childhood was picking up a piglet, thinking he would be soft and squishy and cuddly and finding that he was a rock-hard muscular animal that did NOT want a snuggle. And, I won’t even try to tell you about the time we tried to lasso a pig. Suffice it to say, pigs are hard to handle.

Fortunately, he was tired, so I just held him tightly as we rolled back under the electric fence.

But now…what to do with a tired, scared piglet that needs to be transported across the farm? (this was one time when I was truly thankful that the farm is so very small!) He was too heavy and awkward to carry easily. The Boss still wasn’t back.  The girls were occupied in the barn (they were too small to help, anyway). The piglet and I sat down to think.

Finally, I held him by his little back feet  and “roto-tilled” him back down the alley-way to the barn, allowing him to walk on his little front feet.  Never realizing that the pig-hating neighbor had been watching the entire performance out her kitchen window. (later I found out that many of our animal escapades provided her with much amusement…and much to my embarrassment she shared the stories with the other townsfolk!  Ah, life in the country...)

Anyway, the piglet was back in the pen.  The Boss was finally home.  Frosty could no longer get near the piglets and all was right with the world.

Sheesh!  Who knew raising bacon could be so stressful?

Over the years, we never repeated this story. (thankfully) And, we did have success with hogs (those were just the first of many), although we were never able to make good bacon. And, while I really do love pigs…and bacon…we just don’t have the facilities to raise hogs well. Nor do we have the time, inclination and finances necessary to do the job right. There is far more to porcine management and rearing than "sloppin' the hogs" every now and then.

Pastured hogs do some real damage to the land.  While this can be great if you are wanting to open up new areas for grazing and such, when you have a very limited landbase, it gets messy quickly. Add to this our weather…pigs cannot handle the heat (they can’t sweat) so they need some sort of cool spot in the summer time, preferably with water. Ice and snow aren’t good for growing pigs either.

We also found that our all-natural pigs got sick.  By rooting along the fenceline, one of the pigs gnawed on the roots of some wild cherry trees and very nearly died.  Vet calls are expensive…so are medications.

Pastured pigs are also susceptible to Trichinella, a parasite that can be passed to humans. In our early days, we were under the impression that commercial de-wormers were not a good practice and tried to do everything “naturally”.  The Boss got incredibly sick after eating some under-cooked, never-medicated, home-grown pork. While it was never confirmed to be trichinosis,it was a long, scary ordeal that I worried would end badly. We didn’t eat any pork for a long while after that. That experience alone may have been a game-changer.

So, despite our love of bacon, I think hog raising is better left to those who have the facilities and skills necessary to good hog rearing. With the proper infrastructure, modern hog operations are conscious of what is good for the environment, the animals, AND the consumers.

...and there are some real good bacon makers out there!

Never try to lasso a pig. This has nothing to do with this story.  It's just fun to say.

Be prepared for anything when introducing different species.

But the most important lesson:
Never, ever, do anything in your “backyard” you don’t want the entire community to know about!


I hope you're reading along with the other bloggers who are participating in the 30 Days of Ag Blogging!