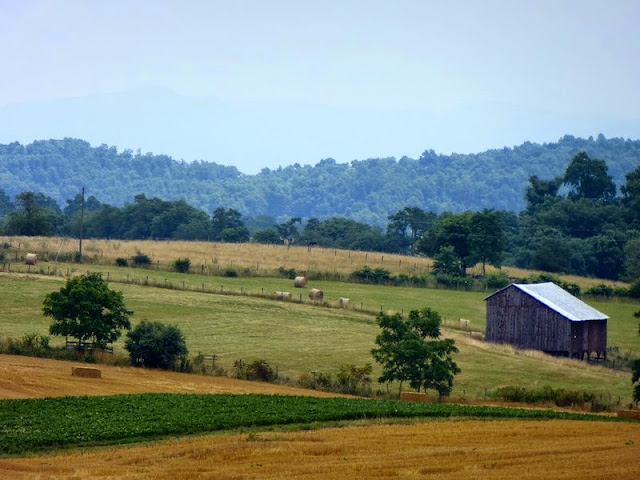 Just before Christmas last year, I saw the hay guy (along with the missus) in town.  We exchanged pleasantries and then he said, “Y’all still want that hay?”

“I gotta git it outta the barn by the end of the month.  Ya think you got a place for it?”

My brain was scrambling…trying to figure where we could put even another bale of hay. We already had it stacked to the rafters.  The sheep hadn’t begun to eat it yet, there was still grass for grazing.

Hay is not cheap and we can’t afford to use it willy-nilly.

He went on.  “the folks that own that farm (the one with the hay barn) want to put it on the market…they want me out of there before the first of next month…”

This time we both sighed.

He’s farmed this piece of land his entire adult life.  His own father had wanted to buy it, but somehow missed out on the deal years ago. But, the new absentee owners allowed it to be leased out, grazed and otherwise farmed throughout the years. Years and years.  The understanding was that the hay guy had right of first refusal.

A price was agreed upon. But, the sale never went through.  He continued to graze the fields and utilize the barn.

Then, out of the blue, the owners decided that now was time to put it on the market.  The price had quadrupled.  …and if the hay guy didn’t want it…it was time to get out.

By the end of the month.

The hay guy weighed his options.  He (and the missus) couldn’t justify going into extreme debt at this point in their lives (they are old enough to be MY parents) just to make and store hay and graze a few more cows. Haymaking is hard work and the cattle market can be iffy.  They would simply down-size.

This made for some major adjustments on their part and ultimately a few adjustments here on the hill.

The exorbitant price means that the land will more than likely never be farmed again. (oh, the land might be leased for hay or grazing) Once a productive thriving home farm, it will sit empty until someone with very deep pockets comes along and “re-vitalizes” it. It will possibly become a bed and breakfast or some sort of country venue for events. Or it will just sit completely empty as the house and barn simply dissolve into the landscape like so many other operations around the county. …and that’s just sad .Visit "Abandoned in Virginia" for more pictures.

This situation is played out time and time again across rural America.  As farms are sold off because the cash value of the land is so high, and the potential for earnings seems so low, we lose far more than just the icons of a past way of life.

The loss of productive farm land means that supplies (of all sorts of farm-related goods) dwindle.  …and everyone understands the laws of supply and demand. Don’t they?

With any “improvements” the assessments go up (around the community) that means taxes are higher, increasing those fixed costs for the farmers.

Without grazing land available, the number of cattle dwindle, causing a loss in revenue. And, a smaller supply of beef.

The decrease in available crop land means that hay supplies drop and that in turn causes the price of the remaining hay crop to rise. Other crops are similarly affected. Again, an increase to production costs for the farmers.

Eventually, those costs rise to a point where the consumers will feel the pinch.  They will complain that the “rich farmers” are getting more than they deserve.

Like ripples in a pond, the effects of this one proposed sale will spread slowly through the community. (and this story is repeated countless times across the nation)

While I don’t know what the answer is…

I do know this.

We need land to grow food and resources for the population. We also need folks who are willing to work that land.

Farmers are NOT rich…NOT land hogs…but, are the hardworking backbone of this country that provide the foundation for everything that the general population does in a day.


Everyone needs to understand and value the two points above.

I hope you're reading along with Holly Spangler and all the other bloggers taking part in the 30 Day Challenge! Here's the link.
Posted by Barbara at 7:32 AM