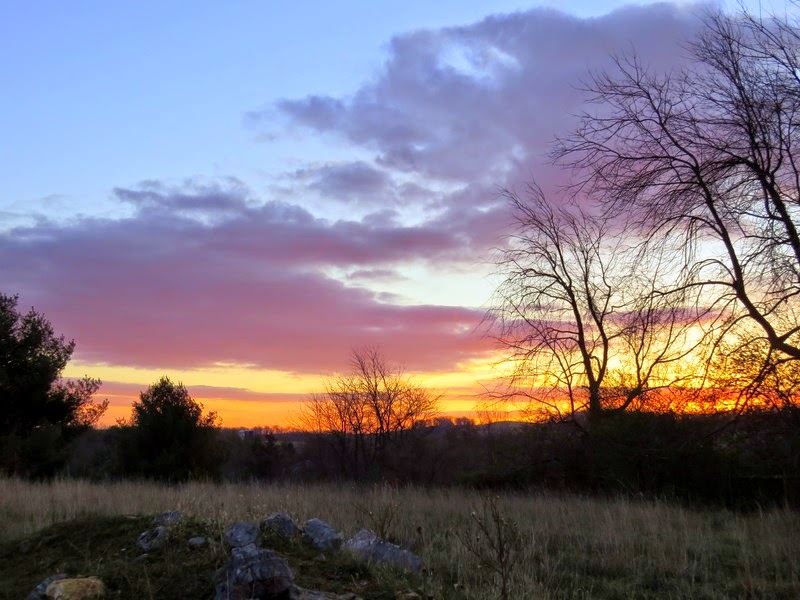 Ahhh…a cold Sunday morning in front of the woodstove…

It’s been COLD! But, it’s been cold all over the country (read this from the Washington Post) And, at least we don’t have SEVEN feet (or more) of snow to contend with like they do in New York. (our thoughts and prayers go out to all the farmers…and others…up there who are trying to survive what can only be described as a weather disaster) The weather has been a big topic of conversation, though. And, had a great effect on farm work for the week.

After last weekend’s record-setting cold, we had rain for Monday’s trip to the butcher to pick up the last of the lamb chop crop of ’14. At least half of our trips to the processor this year were in the rain.  While we welcome the rainy weather, it does make for some tense moments on the interstate.  But, we’re done with our lamb hauling until sometime early next summer and the freezers are fully stocked for Winter sales, and we can utter a big sigh relief.

As is always the case here on the hill, the rain was followed by WIND.  The wind was accompanied by frigid temperatures. (I don’t think it ever reached 30* on Tuesday)  Since it was too miserable to spend much time outside (other than doing chores) and most of the garden bit the dust in the weekend’s brutal cold, I got to spend the day catching up on filing and bookwork.  Hooray!

My inbox is empty and the top of my desk has been sighted.  This caused me to make my annual declaration “I won’t let this stuff pile up like this again!” which led to the Boss’ annual laughing fit. (isn’t it nice I can keep him amused?)  He knows better, bookwork is low priority during the growing season.  But, now I can generate a few reports and we can see just how much we made (or didn’t make) on various ventures.

…and I can tell you that we sold  263 boxes of Brussels sprouts (and we even ate a bunch) despite Gus!   Read about Gus and the Brussels here. There would have been more, but the freezing weather, followed by rain and MORE freezing weather left the remaining sprouts a soggy, sodden mess.  Ah, well, it was good while it lasted! And, it proves that all the little things DO add up.

The weather continued to dictate our actions this week. The frigid temperatures spell the end of grass growth, so it’s time to move the ewes to the Winter paddock and give them access to hay in the barn.

It gets pretty raucous and loud as the ewes acclimate to closer quarters. This also gives me the opportunity to keep an eye on them as we get closer to lambing season.

The cold, short days affected hoophouse re-growth and harvest. The picking window was quite tight this week, since it took until after noon each day for the sun to warm the greens. Did you read this one?  So I spent a number of afternoons picking rather than my one big pick day on Friday.

On one of my harvest trips, I noticed something odd with the newly planted spinach. It would appear that we have an intruder in the hoophouse.  Or several.  There are a number of small tunnels in various places.  I am hoping it is just rats and NOT groundhogs.  I “hates groundhogs”!  They can devastate the hoophouse nearly overnight. Read this.

I read that Irish Spring soap will deter rats. (it certainly would deter me! I have a sensitivity to perfumes and can’t stand most scents) I cut some bars and put them in the holes.  As if to defy me, the critter chewed the bar of soap and threw it out of the hole! Apparently, that’s not going to work. I really don’t want to use anything that will harm the “farm-team animals” should they eat the rats (or whatever it is)…since I’m pretty sure there is NOTHING that Gus won’t attempt to eat.

Since the soap didn’t work, we’ve set traps and looked up mixtures on line to rid hoophouse #1 of its unwanted inhabitants.  It looks like I’ll have to put Plaster of Paris on my town list. (I’m hoping that the varmints will eat the indigestible stuff and…well…you know)   Because, I will win this battle.  You just DON’T mess with Mama’s greens! Read this one.

The last harvest of the Market season is always a little sad, both in quantity (remember the cold) and the sense that it’s the end.  However, the last week this year was slightly different.

Toughchick had an ultrasound appointment and I got invited to go along. That was majorly cool on oh, so many levels.  And it meant that I actually got to see the baby!

Everything looked like it should and we are all looking forward to meeting our first grandbaby sometime in late March. (and, yes, the gender will be a surprise)

After that exciting trip, it was time to prep for one last Market.
And, it was going to be COLD…again. This is the first year we have ever had TWO weeks in a row where we couldn’t set produce out because of sub-freezing temperatures.

Despite the cold, it was another amazing Market, capping off a record-setting year. After closing of the market, a group of vendors went to the Depot for what has become our “annual vendor luncheon”.  It was a nice way to end the Market.

Now we’ll concentrate on other things.

This week will be devoted to preparing for the big family meal and spending time with our peeps and making some memories.

…because before you know it, the seed catalogs will arrive (we got the first one a couple of weeks ago) and it will be time to plan for 2015. …and it’s only about 7 more weeks to the first lambs!

Hope you’re having a  Happy Sunday!

Thanks for stopping by.  Come visit us again real soon.

Lessons Learned:
Modern technology is AWESOME.
The little things DO mean A LOT!
The hoophouse may never be “critter-proofed”. (but, at least I can never say I’m bored)