I don’t care what those cowboy songs say…the sound of yipping coyotes late in the night is creepy!  Frightening.  Or at the very least…unsettling.  Particularly to a shepherd.

Years ago, as I headed out into the cold and inky darkness to check for newborn lambs, I could hear the coyotes singing their nocturnal song.  It sounded closer than it ever had and freaked me out just a little. I began to worry over our little flock.

The neighbor down the way had some losses. Then, another closer neighbor. And the county started paying a bounty for coyote removal.  Maybe it was time to think about protection here on the hill.

Losses are a very BIG deal in a very small flock.  While losses are never good, in a small flock each animal makes up a bigger percentage of the flock and has a bigger impact on the bottom line.

We began to seriously consider our options.

How ‘bout a dog? Based on our previous experience with a dog, that was out.  The dog we brought from NVa killed chickens and terrorized the goats.  She also wandered in the nighttime and didn’t thrill the neighbors.  Did I mention she was mean?  No…a dog didn’t seem like a good fit.

What about a donkey?  We had visited the BLM (Bureau of Land Management) event when they offered horses and burros for “adoption” in our area.  I truly wanted this little pink burro, but the requirements were incredibly strict. If fencing and housing weren’t up to their standards, they could come remove the animal at any time.  Compliance was going to be expensive and far too complicated for our limited budget. Adopting a human child would have been far simpler. Although it wouldn’t have addressed the sheep issue.

The girls were deeply involved with fiber arts at the time.  They spent a lot of time spinning, weaving, knitting, dyeing and felting. We attended a few fiber festivals and searched out new sources for fiber. There were all sorts available. One was llama. 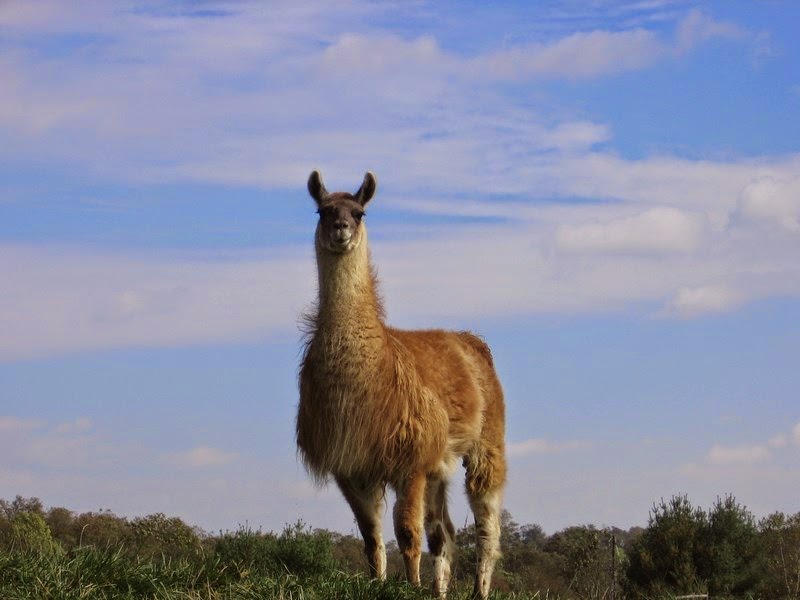 I had been reading about other shepherd’s approaches to the predation issue. Guard llamas were discussed more than once.  It is thought that their mere presence will deter predators. One of our shepherd friends swore by his llamas. Hmmm…maybe a llama.  Multi-purpose…hmmm.

It seemed that we may have hit on the perfect solution.

I don’t remember how we found the llama lady in the area.  She had a huge number of llamas and was willing to sell one of the older ones for a bargain price.  She even rode in the back of the truck with the llama on the short trip back to the hill.

Now, that was a sight! 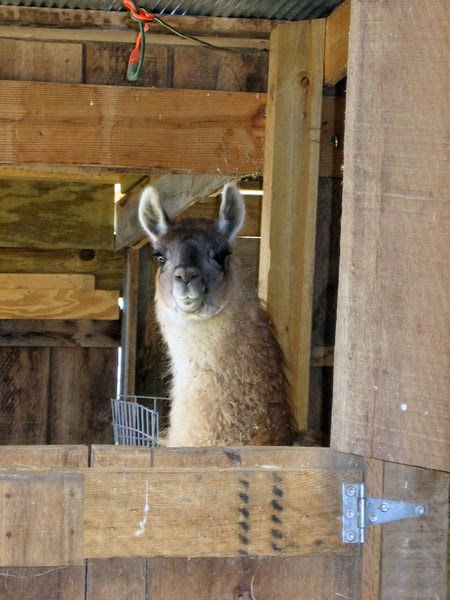 This was going to be cool.  “Shirley” would add a bit of an exotic air to the place.  With her slender neck, long black eyelashes and fluffy cinnamon colored fiber, she was a beautiful animal.

Upon her arrival, it became evident that we needed to “llama-proof” the place.  Her neck wasn’t just long….it was LONG!  She was well over 6 feet tall, towering over the sheep.  We (the Boss) cobbled together a bunch of gates just to keep her in the barn as she adjusted to her new home. 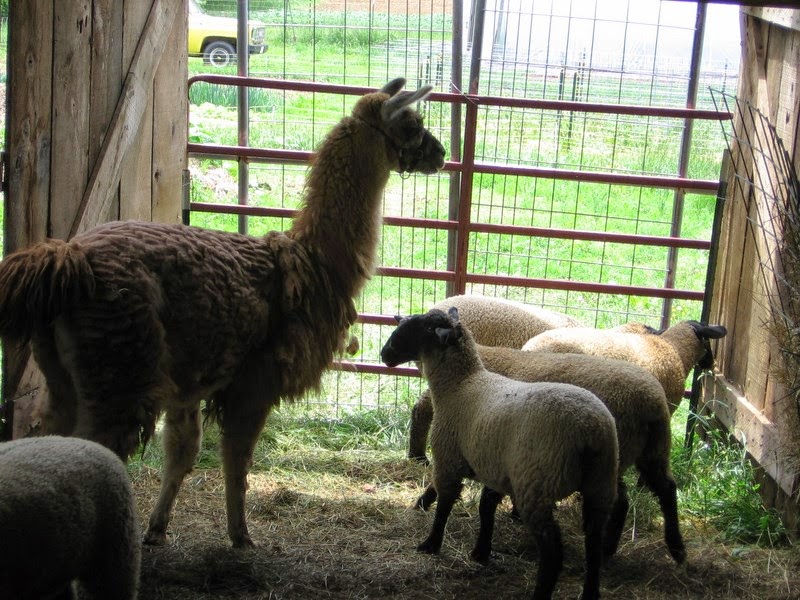 But, Shirley took an instant dislike to Blondie.  Blondie had been designated “llama holder” while we got ready…I don’t know exactly what transpired, but they were not friends. Blondie wasn't too keen on Shirley either.   I hoped that over time they would learn to get along. Never happened. 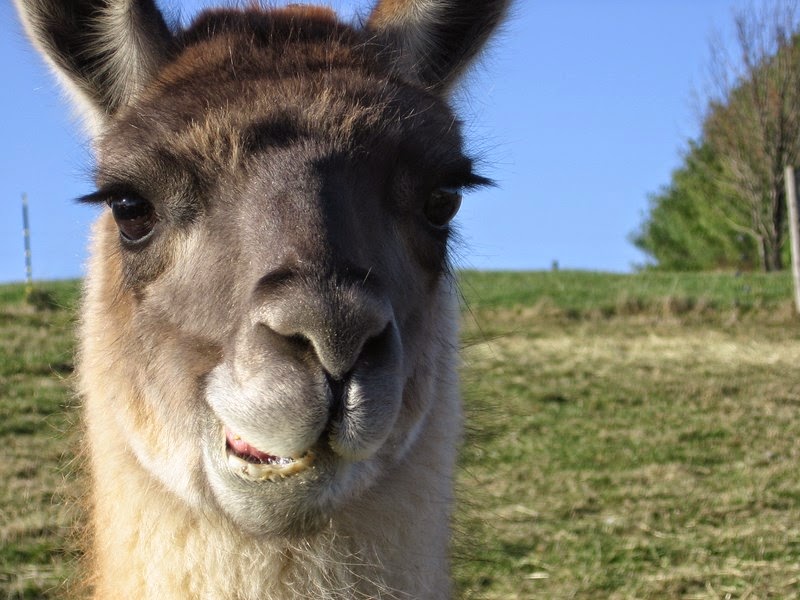 "Shirley" made this weird, worried noise whenever she was bothered (which was often).  Llamas are known to spit if they are annoyed. I reckon “Shirley” was too old and refined for that.  She just made her little worried noise. HERRRRM! 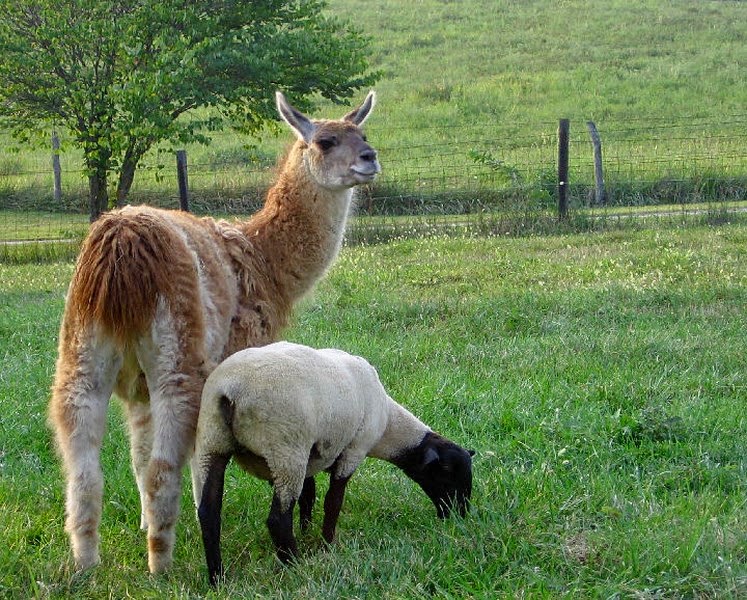 When we put them out in the field together, it seemed to be working. Shirley learned to come down to the feeders with the lambs, eating out of her special little bowl. She certainly added to the ambiance of the farm.

Yes, there was a down-side to this great solution. (isn’t there always?) 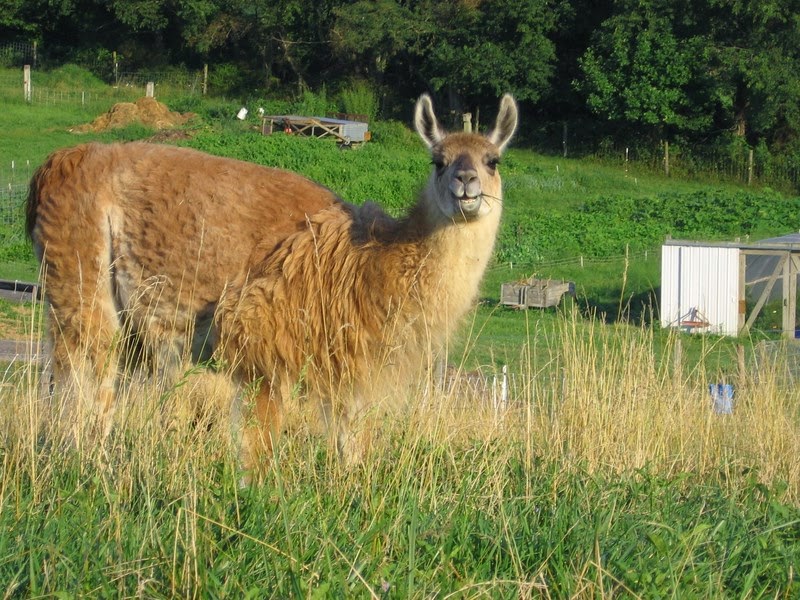 Shirley was over six feet tall and 350 pounds.  Shirley was used to being with other llamas, the sheep were simply tolerated.  Shirley was old and set in her ways. (I think she was 12)  She was more than a little wild. That long, slender neck was one gigantic (incredibly strong) muscle. (that she knew how to use it to her advantage) And, Shirley didn’t like to be handled. At all.

But, she had to be handled as it was imperative that she be kept de-wormed. Any parasites she had would eventually transfer to the sheep and create another (far worse) problem. We have learned countless lessons concerning lambs and parasites. (trust me) 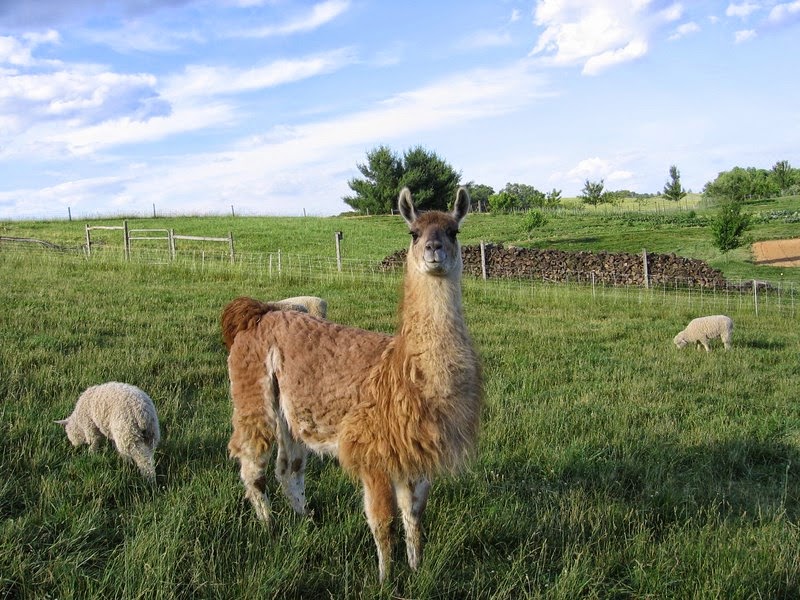 Working a llama is far different from working lambs. The size difference alone makes for some interesting moments. It was suggested that we squeeze her into a corner with a gate and give her the medication.  Did I mention this medication was in a syringe? With a very LONG needle? 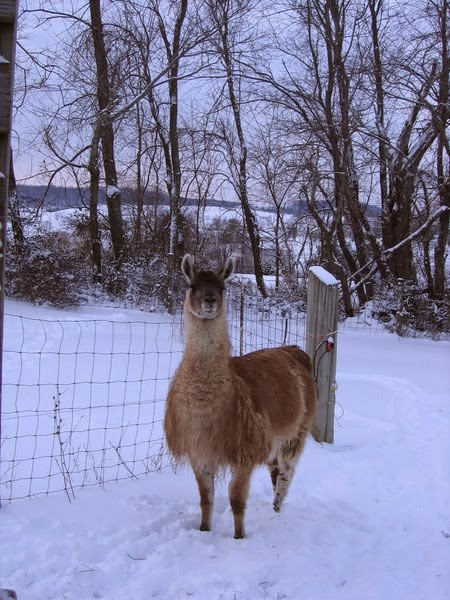 This procedure had to occur on a monthly basis. The first couple of months went well.  Perhaps too well. The next time we approached, Shirley was wary.  We squeezed her in the corner, I stuck the needle in, and WHAM! She jumped, knocking both the Boss and me backward as she crashed through the gate. I was successful in the administration of the medication, but the needle was bent beyond recognition. The Boss and I were not seriously injured...just a few bruises. But, still...

This llama thing certainly wasn’t all it was cracked up to be.


HERRRRM! I began to feel like making some worried sounds myself.


Shirley’s one job was to protect the lambs.  We had hoped that she would bond with them and her presence in the field would deter any predators.

What we didn’t expect was that Shirley would in fact chase the lambs.

Apparently, Shirley didn’t want to be a guard llama. 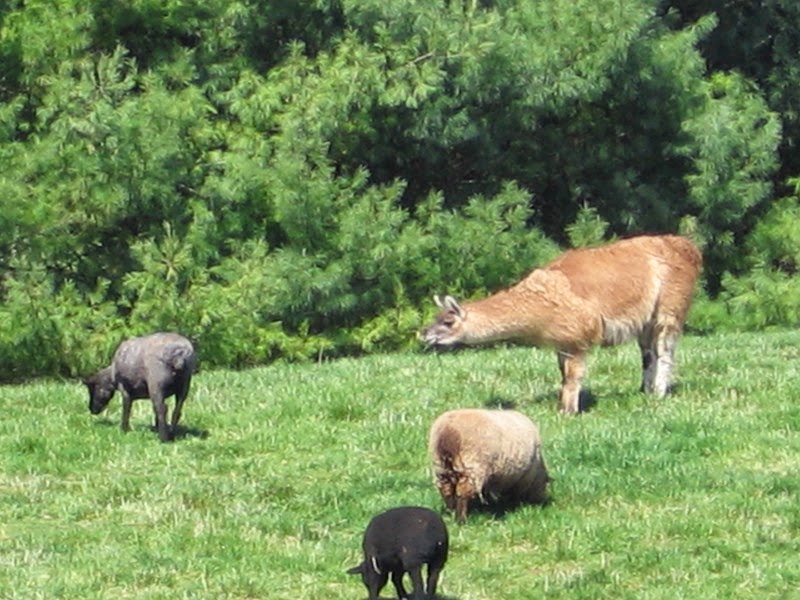 I looked out back one day to see her chasing the lambs around the field, snaking her long neck and them and making her worried sounds.  At first, I thought it was some sort of game…the lambs run around on occasion and it looks like they’re playing.  On further investigation, this was not friendly in the least and more than one little lamb was panting heavily from the exertion. It was hot and the woolly lambs wouldn’t benefit at all from the work-out.

This became a daily occurrence and the "llama-working adventure/rodeo" continued.

Maybe it was time to re-consider.

Maybe the coyotes weren’t such a problem after all.

WHAT do you do with a used llama?

Eventually, Shirley got re-homed to a farm just down the road a bit where they have a number of other llamas and a few old sheep. She seemed quite contented the last time we saw her, hanging out and munching grass with her own kind.

The chance of finding the perfect, exotic bargain of a solution is slim at best.

Every "great solution" comes with its own set of challenges.