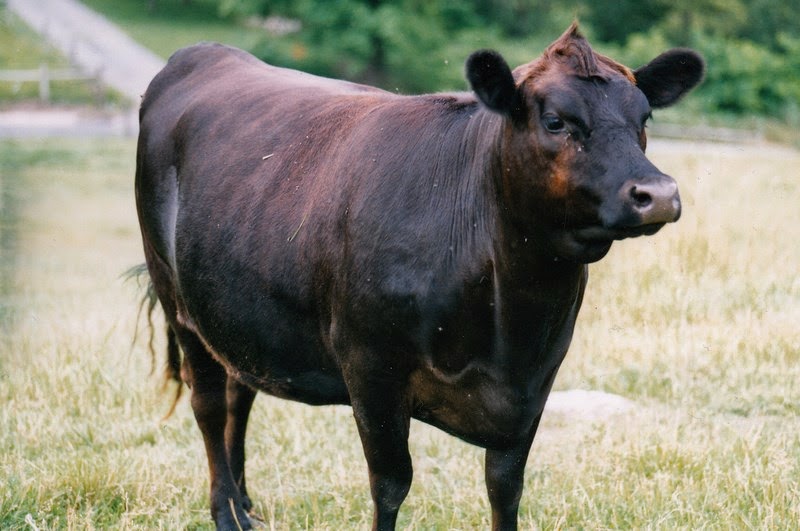 As a farmer, living in the heart of Ag country, "In the Land of Black Cows", as it were…
…I have an embarrassing admission to make.

Black cows freak me out.

Well, okay, it’s not that bad.  It’s not debilitating or anything…and it’s not like I have a lot of personal contact with cows anymore anyway. But, it is somewhat embarrassing.

And, it's not steers, not bulls.  Just black COWS.

These “issues” go back to my childhood.

The summer I was six Dad had a bunch of stocker calves that he kept in the field between the house and the barn.  (stocker calves are generally weaned calves somewhere between 300 and 500 pounds…honestly, these seemed WAY bigger) Since I was always looking forward to an opportunity to go to the barn, I wandered through the calves fairly often.  Most of them didn’t even notice me.

Except this big heifer with the eartag #566.

She was big. She was frightening.  …and she wouldn’t leave me alone.


She would walk along behind me, her breath hot on my bare legs.  She would snort and toss her head, and I would flee pell-mell for the barn.  (or back to the house)  She didn’t do this to any other family members.  Maybe it was my red hair.  Maybe she knew I was scared. It was suggested that I call her bluff.  Maybe she was just playing. (oh yeah, right)  I was pretty sure she was just evil. (after all those Sunday mornings in church, I was convinced her tag number should have been 666…the mark of the beast) It got to be a real pain to go to the barn.

One day things got really scary.

I don’t know if she was hungry, in heat…or just in a REALLY bad mood.  She bellowed and charged me.  I flipped out and started running and running.  And screaming.  She chased me clear to the bottom end of the property where I reached the creek.  I leaped across and cringed next to the fence in fear of what would happen next.   She just stood there, bellowing angrily at me from the other side. Certain that she would jump the creek as well, I must have closed my eyes in terror, because I remember opening my eyes to two faces. Alongside the evil, angry, bellowing cow was my equally angry mother puffing from the exertion of tearing down the hill after the two of us.  I don’t remember what my mother said, but it wasn’t pretty.

…and that was the end of my trips to the barn for a while.

I was really glad when that heifer ended up leaving for the stockyard. (although it would have been sweet revenge to have eaten her, I must admit)

Until we moved to the Valley, we didn’t have any opportunity to wander with cows, black or otherwise. But, if you’re going to have milk and eat beef, you need cows.

My milk cows were always the beautiful brown-eyed Jersey girls, and they were more like pets than farm animals. No worries walking with them.  Ever. You can read about the Jerseys Here. But, without the option of AI-ing the cows, we used the neighbors’ Angus bulls on occasion.

That meant the calves eventually turned black.  …and I found that I really do have an issue with black cows. Which makes the next part of this story somewhat ludicrous… 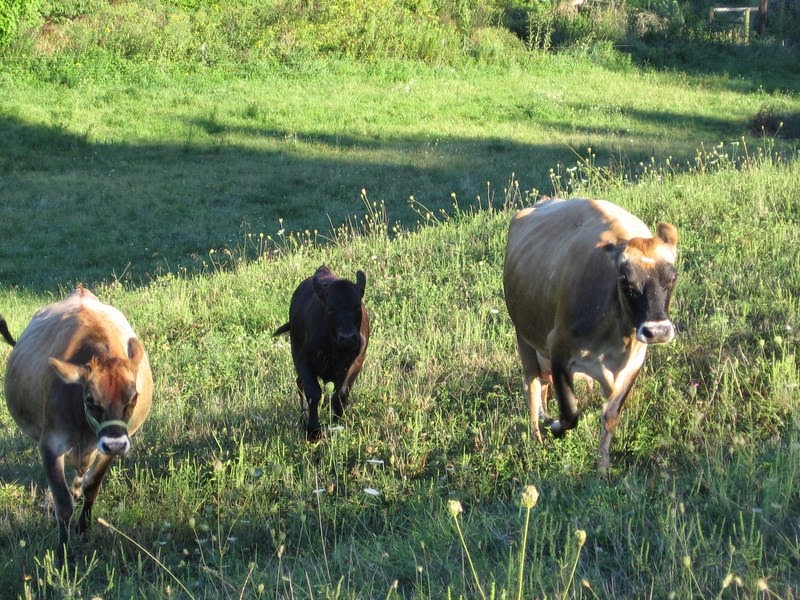 Someone suggested that the cross between the Jersey and the Angus would make for a hybrid cow that might just have some resistance to milk-fever. Since we were having such issues with the malady, it seemed worth a try. When we asked Ol’ doc Snowdy what he thought, he recollected his momma milking a black cow back in the day.

So, we decided to keep a heifer calf and see how that worked out.

…completely overlooking my “issues” and the old adage that

Angus cows are great mothers, attentive and alert. But, they will kick and/or butt if they feel threatened in any way.  ...and you never know what might make a cow feel threatened.

The heifer took a little trip across the lane and got bred without any issues. (that was a plus) Then, we began working with her so she would learn the whole milk-cow routine of coming in the barn. (as long as she didn't walk behind me...everything was fine) But, she was incredibly flighty.  Once the headgate squeaked as I closed it in place to start her training. She jumped and landed on my foot. I could hear the flesh rip as 1000 pounds of bovine met my little toe. Man, did that hurt! On the upside, I could predict the weather with great accuracy for about two years following that incident.

If this wasn't enough, she would not or could not stand still for milking. She would kick and buck and jump all around. (just getting a pail under her was an action worthy of a combat medal) The Boss tried hobbles and he also tried poles between her back feet.  If she couldn't kick, then she would attempt to fall over.  You could see her leaning and listing to one side.  The thought of 1000 pounds of bovine landing on my head as I sat milking was a little more than I could take.   Maybe it was time to reconsider this plan.

As if to drive the point home, she developed a habit of a sneaky little sidekick as she went out of the barn.   You couldn't even see it coming...then, wham! ...it landed just above my knee-cap. I had more than a few bruises on one leg and I couldn't get a drop of milk out of her and into the bucket.

It was time to go back to Jerseys! But, this experience led us to Gracie-the-cow (and ultimately her calf, Penny), so all's well that ends well.

And, we ended up with LOTS of very tasty Angus-Jersey meat in the freezer!

(but, I still steer clear of black cows.)

Lesson Learned:
Some issues from childhood never really go away.

There is a definite difference between beef and dairy breeds.

Some suggestions are better off NOT taken.

Ol’ doc Snowdy’s momma must have been some kind of woman!

Nobody likes a reactionary...cow or otherwise.

I'm not the only one who thinks this way...check out this book. (and show on National Geographic)


There are less than 10 days left in the Ag blogging challenge.  Are you reading along with the other bloggers?  Here's the LINK.