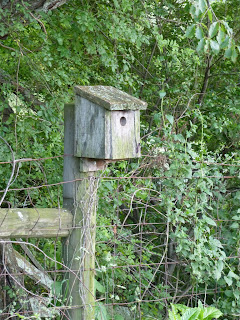 I reckon I owe the birds around here some sort of apology, because in all honesty I suppose that I am to blame for the current shortage of bird housing here on the farm.  There are numerous boxes placed strategically around the farm in order to attract the bluebirds who are voracious insect eaters.  However, the sparrows and wrens fill the boxes with stuff in hopes of attracting a mate and leave the mess behind when they move on later in the season.  The boxes should be cleaned out annually, but often the birdhouse cleaning often gets overlooked for far more pressing chores.

This fact did not deter the bluebirds.  They have been a fixture here on the hill for a long time.  A flash of blue, and then Mister is gone.  A sighting of the pair, and then they are gone.  Occasionally we will hear them singing to one another.  Since the bluebirds do eat so many bugs, we are very glad to have them around the farm.  I don’t think we had ever really observed them closely. With the birdhouses already occupied, it seemed unlikely that they would nest.  But, I did see them repeatedly carrying hay and grass while flying. 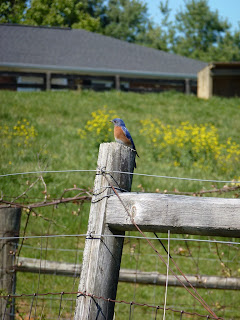 Then we noticed the nest in a most unusual place.

Out here, we burn some of our trash rather than take it to the dump. While we do a fair amount of recycling, there is always some stuff that ends up in the burn pit.  Since it’s hard to remember to take a lighter or matches, and a real hassle to have to walk back to the house…the Boss built a handy little lighter cubby on the post by the pit.

Apparently, Mr. and Mrs. Bluebird thought this looked like a handy little nesting spot. So, back behind the lighters, they built their little home.  It didn’t seem ideal to me, but apparently I know nothing about bird nesting sites! The first egg didn’t quite make it to the nest and ended up smashed on the ground.  I figured they would give up after that, but they were quite determined to nest in that cubby.  Every time we went through the garden gate, Mrs. Bluebird flew out at us. Occasionally, Mr. Bluebird flew out as well.  They would both shriek wildly until we finally got out of range.  We were trying to remember to walk through another gate, but old habits die hard and old minds….well…

They seemed determined to nest in the cubby, despite traffic by their nest, despite the chickens clucking nearby, despite our occasional use of the lighter.  They would vacate when we were in the vicinity and then fly right back.

They even withstood a feline invasion. 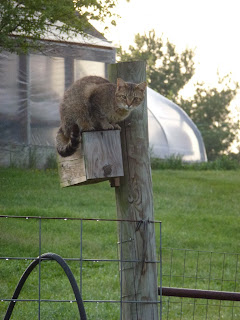 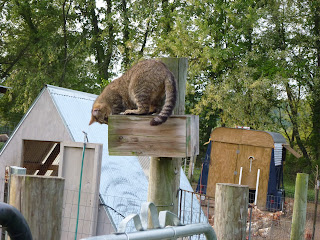 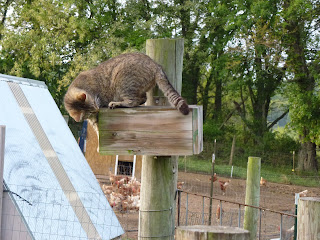 I suppose Booooyyy was bored one morning.  He
was sitting on the post, waiting for me to get back from chores out back.  He is the epitome of spoiled laziness which is an unusual characteristic in a barn cat! Sometimes he sits and yowls until I reach him, then he catches a ride back to the barn to share the dogs’ breakfast.  While he was sitting there, yowling and waiting, he slowly turned and looked in the cubby.  I could almost see his little mind working.  He re-positioned himself and reached inside.  Then he stuck his face into the opening.  His “arm” was too short to reach back to the nest, his head too fat to fit in the hole.  Rats!  He couldn't reach the nest!  The bluebirds had overcome yet another hurdle.

Since the barnswallows have taken up dive-bombing all the cats in order to protect their own nest in the barn rafters, Booooyyy has apparently decided bird-watching is well…for the birds.  His lazy nature would rather wait for the dog food. He has not shown any interest in the bluebirds of late.

Yesterday, the Boss noticed that there were some babies in the nest by the fire pit.  He beckoned me to look inside. Sure enough, there were a number of little beaks that would bob up wildly if you stood by the nest and made some noise. 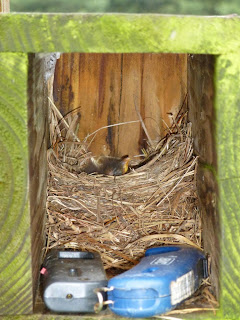 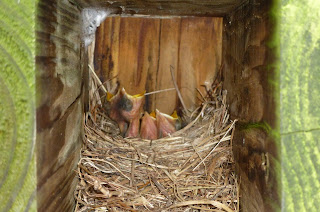 This morning, I was able to get a fairly good shot of them.  While they’re presently little faces that “only a mother could love”, soon they will be flying with their parents…eating bugs in the garden.

I’m glad Mrs. Bluebird was so determined to have her little nest by the burn pit. I’ve read that bluebirds can have several broods in one season.  I sure hope so!  We truly welcome the assistance in pest control.