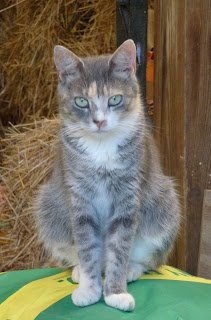 Squeekie is a dainty little cat that tips the scale at just barely five pounds.  She seems so demure with her whispery little voice and her tidy white mittens that never seem to get dirty.  However, Squeekie has another side than somehow goes unnoticed. Squeekie is an awesome huntress!

The first inkling I had of her killer instincts was when she had her kittens in the loft of the barn.  One day, as I checked on the kittens, I noticed a large, dead blackbird in the loft.  I thought it was odd, but there were many more pressing things to wonder over at the time, so I went on my way. 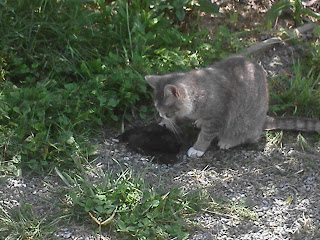 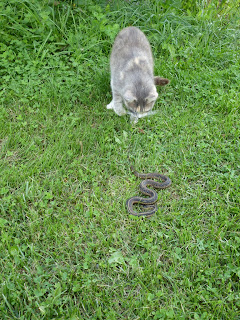 Since that time, I have seen her get countless mice, a rat, a bluejay, a robin, and more than one blackbird.  I really dislike when she gets birds, but she is a CAT…so, there’s not much we can do about that. We do feed the cats on a regular basis, so the hunting is purely instinctual.

Her hunting prowess is just something to be expected now.  It’s not unusual to notice her walking along with her latest prey in her mouth.  However, I was quite startled when I investigated the other day. 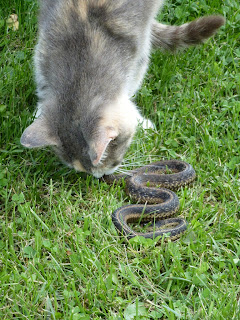 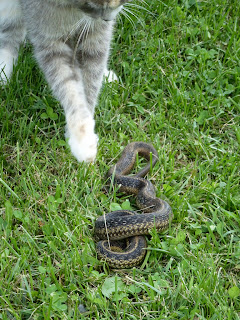 We were just finishing up afternoon chores when I noticed a commotion in the backyard.  The dogs and cats were all snuffling about in some sort of frenzy.  Squeekie was right in the middle of it all. She had something dark, something large; I figured it was another bird…or a rat…

Nope, it was a SNAKE! 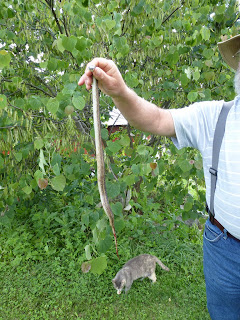 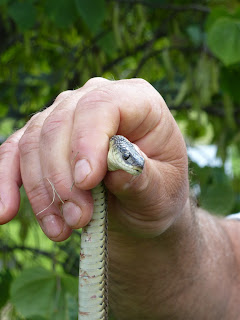 And not some little baby snake, either.  When the Boss retrieved it, he held it up for me to see.  It was at least two feet long.  She had wounded it, and I suppose was ready to eat it. (blech) Since garter snakes are good for pest control, the Boss took it elsewhere and released it in hopes that it would heal and get back to eating bugs.

Squeekie was more than a little bothered that her treasure was gone, but a few cat cookies distracted her. Then she was back stalking mice around the feed cans in the barn.

Squeekie is proof positive that looks can be deceiving...and we just never know what might happen around here!
Posted by Barbara at 6:11 AM