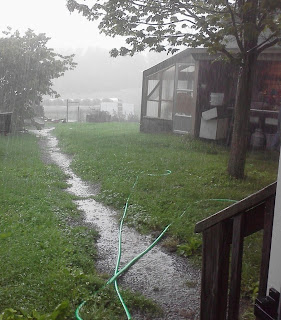 We have had SO much rain lately…

Today was no exception. The sky got darker and darker.  Jed got scared-er and scared-er. It started to sprinkle. The lambs came running toward the barn.

The Boss was processing scallions in the shed and I was starting seeds in the greenhouse.  Jed was wandering between the two locations hoping someone would hold him and comfort him through the upcoming storm.

All of a sudden, the heavens opened!  It was POURING!  It was ROARING!  The noise inside the greenhouse was astounding.  The volume on my MP3 player couldn’t begin to compete, so I finally just turned it off. 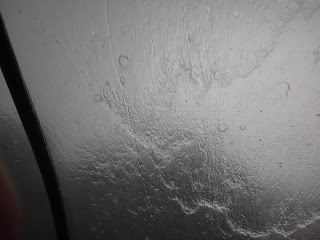 The rain was gushing down the sloped sides of the greenhouse in torrents.
Suddenly, all the little kitty claw marks began to allow rain through in big, wet drops. For the story behind the claw marks...read this...
Maybe we’re on to a new type of irrigation! 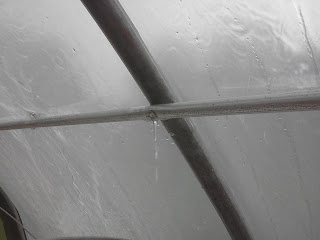 I peered out through the rain toward the shed.  The Boss was still working.  …and Jed…poor Jed was sitting as close as he could to the Boss, almost on top of some buckets in the shed.

Then, as suddenly as it started…it was over!


Nearly ¾ inch in just about 15 minutes! Wow! We’ve got gullies everywhere and gravel has washed down the driveway and the lane. It was something. Now the sun is shining and I swear…you can hear the crops (and the weeds) growing! 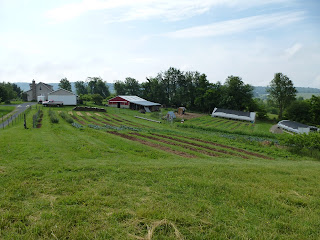