We were those “new people” once upon a time.  The old-timers came and checked us out.  The conversations in the post office/hardware store stopped when we walked in.  The neighborhood “gossip” scoped us out firsthand.  It was most unsettling to be on that side of things, too.  I was so glad we were able to pass muster because M’brook is a great place to live! http://homesteadhillfarm.blogspot.com/2011/02/i-love-mbrook.html

Once one of the neighbors said, “waaaalllll, I thought y’all was from the country!”  when I couldn’t hide my distaste for the subject at hand (a combination of cornbread with buttermilk AND green onions). My counter was “well, I just s’pose it was a different country!”  His nearly uncontrollable laughter made me realize that things would be okay.

But, the big test came just before the Firemen’s Parade that first year.  The phone rang.  “Miz Womack?” uh, yes… (I still look around for my mother-in-law when I hear that) “I heard you were a baker. Could you possibly bake me a cake for the dinner following the parade?”  Despite the fact I still hadn’t really connected the face with the name, I said YES, because that’s just what you do.

Later, we delivered the cake, attended the parade and carnival, and in so doing met most of the “neighborhood”.  In the fifteen years that have followed, the parade and carnival have changed dramatically, but I am still asked to bring a cake.  The only difference is now the phone call is slightly different.  “Hey, Barbara!  J, here….you make me a cake?”  It goes without saying that I will…I just check to see if the delivery plan is the same as years past.  You know what?  It is….it always is!

Not much has changed in all the years we have lived here.  As I have noted before, change comes hard out here.  When the property behind us changed hands, following the death of a great neighbor, WE were the concerned ones.  We greeted the new neighbor with freshly baked bread and a dozen eggs.  Happily, we found a neighbor with whom we have co-existed pretty much without incident.

When the property next door changed hands, we were again concerned.  We had lost some potential grazing land, but more importantly…our buffer zone with M’brook and the road beyond.  Time went on.  Not too long ago, the Boss met one of the owners.  He was a nice young fella with a family, hoping to build on his land sometime in the future. We heaved a big sigh of relief on this side of the fence. 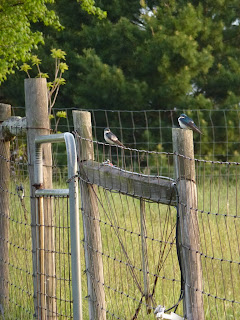 A couple of days ago, I noticed we had more new neighbors…well, perhaps returning neighbors would be more accurate.  The tree swallows have decided to take up residence in one of the “bluebird” houses out back. Of all the bluebird houses on the farm, not one is inhabited by bluebirds! It would appear that there may be some type of rental dispute to work out with a sparrow couple, but the tree swallows seem to be here to stay for the season. 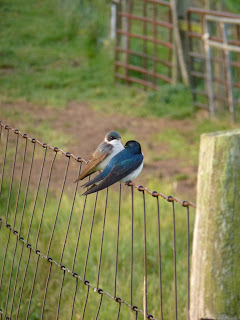 Now, tree swallows may very well be my favorite bird.  Actually, I am partial to the entire swallow family…I love to watch them swooping and flying. They will congregate in great numbers when the Boss mows; they eat all the small bugs stirred up by the tractor. There are a number of species within the family. Typically, there are only a few that make their home here in the Valley. There are the barn swallows who lend something special to a barn. The existing nest way up in the rafters of the barn has had a few “lookers” lately.  Their cousins the purple martin is greatly appreciated by gardeners throughout the Valley. Bank swallows round out the family, although I don’t think we have seen them here on the hill. I think the tree swallows are the most beautiful, with their blue-black iridescent backs and bright white chests. 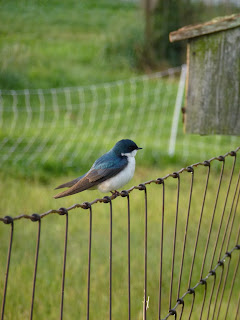 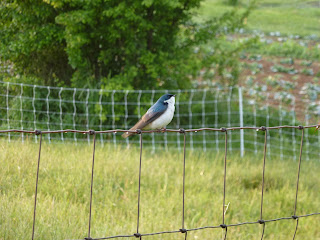 Each morning when I open the gate for the sheep to graze out back, there’s little “mister t” sitting on the fence and singing his pretty song.  He will let me get quite close before flying away.  The “lil missus” is nowhere near as flashy, nor as friendly.  But, neither of them seem to perceive me to be a threat.

The song of the swallow has become something I have come to expect in the morning.  The thought of these new neighbors gave us no qualms at all!
Posted by Barbara at 5:40 AM