I like to make a plan…work the plan…and then celebrate its completion.  However, things rarely go according to my plans.  Sometimes I really wonder WHY I make the plan!

There is a lot of truth in the line from the Montgomery Gentry song,   ONE TRIP “ …'Cause life's just a crazy ride on a runaway train…”

You know….life is what happens while you’re planning other stuff….

That was certainly the case today.  We have a standing "plan" for Thursdays around here. Pack the freezer, plan the Market harvest, pick some of the more hardy crops, and get at least one big job done.

This morning, a check of Facebook served to remind me that I hadn’t printed out any recipes for Market…for that matter, I hadn’t even collected them….I hadn’t given much thought to the project.   An hour later, I had produced and printed a handout for Saturday.  Of course, that meant I hadn’t done what I intended.

WHAT had I intended?  Oh, yeah….I was going to pick the spinach.  But, wait…

The Boss had hit a snag in tilling the hoophouses earlier this week.  The torrential downpour on Monday had caused some minor flooding IN the hoophouse, so things were still fairly wet.  Then, the tiny tiller needed some maintenance. So, he was off schedule as well.

Since he was tilling in the hoophouse, I decided to postpone my Thursday harvesting due to the noise.  That led me to the garlic patch to check for scapes.  I was going to blog about scapes as well, so I was really looking forward to the scapes.  But, the amazing weed growth overshadowed any scape picking or thoughts about blogging.  OH MY!  Have there ever been such weeds?

Weeds in alliums (the onion family) can spell disaster, so prompt attention was necessary.  At this point in the garlic life cycle, it is crucial for continued development that the plants have good, DRY air circulation.  First, I detached the irrigation line, and then turned my attention to weed removal.  If the weeds were left to grow, the moisture would cause the garlic plants to mold and rot at ground level.  This could mean a complete loss of the crop.  So, I spent some quality time in the garlic.

I was about ¾ of the way through when I realized I was getting hot.  That sun was bright. YIKES!  If I waited too long, the spinach would get really wilty while I picked.  While shocking it in cold water might bring it back, it would be better if I didn’t have to resort to such measures. The Boss had finished the hoophouse tilling and was on to other jobs.  Off to the hoophouse…

Okay, the spinach was picked and chilling in the cooler. WHAT was I supposed to be doing?  Oh, yeah…the garlic.  I finished weeding the garlic before lunch.  While it was not the most meticulous weeding job I ever completed, it granted the garlic some breathing space until we harvest it sometime next month. 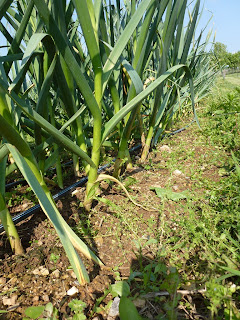 Now, on to the job I intended to do earlier.  …and it’s only one o’clock! Oh, wait WHAT was I doing? This is why I write a list.

The onion beds desperately needed weeding. This is an annual event. See THIS entry from last year.  In addition, the cold winds of late April caused us to lose approximately a third of the onion plants. Since it was still early enough for some of the onions to be re-planted, we ordered more plants, and I have been working on getting them in the ground (between rainstorms).  As the loss was directly weather-related, there was no warranty to cover the loss, and it was imperative to get the new plants in the ground or incur a double loss. I was about halfway through the weeding phase at the end of last week when the big rain came.  I had been waiting for some dry weather in order to finish the job. 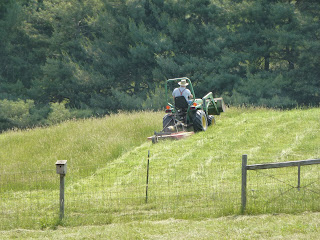 The Boss had been working on weeding the onions where we didn’t have to re-plant.  When he finished, he set off to bush-hog all the paddocks where the sheep are not grazing.  It is sort of crazy this time of year….we go from NOTHING to graze to what seems like constant mowing to keep up with the grass growth.

Finally, I got the weeding/re-planting finished.  That job was “supposed” to get done LAST week.  But, like I have said before…the work isn’t going anywhere!  …and the Boss always says, “it will get done…eventually!”

Despite the change in plans, the roundabout way of getting there, we got everything done…and then some.

Can’t complain about that!

Pretty good…this ending the day on a positive note.
Wait!  What’s this in the mailbox?  A box of sweet potato plants!  Didn’t think they were going to arrive until the end of the month. Off to the greenhouse to get them in a pot with some much needed water.  Looks like there’s an addition to my next TO-DO list.

But, wait a minute…there should be more!…off to check on that…
…and so it goes.
Posted by Barbara at 6:17 AM