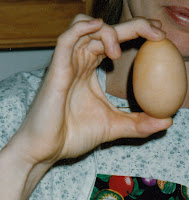 Personally, I have always thought this a very silly argument.  Has an egg EVER just appeared? 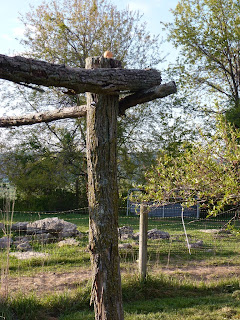 The other morning, as I did the dishes, I gazed out the window, surveying the bit of the world in the backyard.  It was a lovely Spring day: flowers blooming, trees budding, birds singing…and an egg on top of the grape arbor.  WHAT?  I looked again.  Yep, there really was an egg on the grape arbor.

I questioned the Boss.  I thought perhaps he thought it would be funny to see if I would notice. He occasionally likes to tease me all the time. His bewildered WHAT?   only proved that he had NO idea what I was talking about. 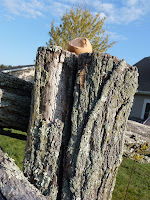 When I investigated further, the “egg” was just a shell.  THE RAVEN ( Ellie’s nemesis) must have stolen one of Ellie’s treasures, taken it to safer ground for feasting  without cleaning up after himself. At least that is my hypothesis. THE RAVEN has been observed repeatedly in the backyard scooping up “treasures” and flying away with them.  Short of installing a “farm-cam” we will never know some of the strange things that happen around here. 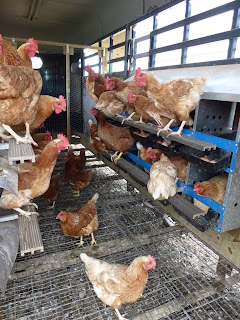 The Spring of the year is the height of egg production.  The hens are laying an enormous amount of eggs and they cannot be counted on to lay all those eggs in the nest boxes.  They occasionally lay on the ground, in the feeders, and by the feeders.  Much to the Boss’ frustration, a good number of the pullets lay their eggs on the floor of the henhouse. He is very discriminating in his selection for the Market. The very dirty or questionable eggs are never offered for sale. 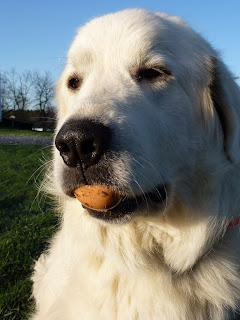 When he gathers and then washes the eggs, any cracks or undesirable eggs are discarded.  This is Ellie Mae’s favorite part of the day. To say Ellie loves her eggs is a somewhat of an understatement.

She will take an intact egg gently in her mouth and carry it around for a long time, searching for just the right spot.  She will then lick the entire egg clean, savoring each morsel of dirt and grime.  Then, she will carry it from place to place, trying to find the perfect place to eat it.  Once she finds the perfect spot, she will gently crack it open and eat the yolk and white.  Occasionally, she will eat the shell as well. 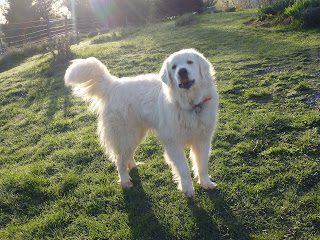 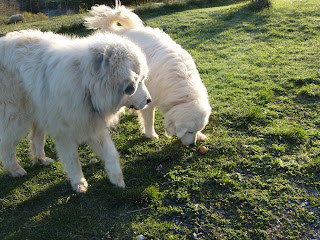 Ellie often tries to get Jed to participate.  He does not seem appreciate the great egg treat.  She will show him the egg and attempt to tease him into playing with her.  He is generally uninterested in her “doggie-gourmet” offerings, he would rather eat sheep feed or wait for the occasional dog cookie. The eggshells don’t seem to agree with him at all.

The crows and the RAVEN seem to enjoy the eggs as well, much to Ellie’s displeasure.  They have been observed swooping in among the chickens to steal the eggs laid on the ground.  We have seen them fly down into the compost pile and root around for eggs as well.  Ellie’s crow battles are legendary.  You need to read THIS. But, the crows and the RAVEN are cagey creatures.  I have yet to photograph them in the act of egg stealing.  The only evidence I have is circumstantial at best…and the fact that the crows will sit up in the trees laughing raucously at Ellie’s displays of annoyance at their blatant thievery.

So, I am left to my theorizing about the egg on the grape arbor…

Yesterday, I found an eggshell in the haystack in the barn…  Maybe we should invest in a “farm cam”! 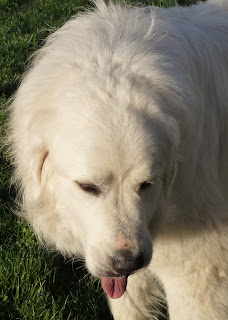 In the meantime, this is what Ellie thinks of the crows and THE RAVEN!