A Long Row to Hoe 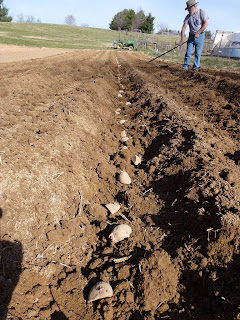 When I was a little girl, I remember my dad and other grown-ups saying… “He’s got a long row to hoe…or a tough row to hoe” fairly often. Even back then, there was never any question in my mind as to what the grown-ups meant.

A quick Google research reveals some serious discussion regarding the original source of this phrase.  While growing up in the country…and being expected to work in the garden…there was no doubt as to the meaning.  It simply meant that the job or life situation ahead is going demand commitment and hard work. The original source didn’t really matter. The idiom is as true today as it was when I was a child, or whenever it was first uttered.

I got to thinking about this while we were planting the first of the potatoes for the 2012 season.  Since we do this job in the spring AND in the late summer, it seems like we’re always hoeing (or actually raking) some long row. For the record, a rake works better because you can cover more ground in a single motion. It doesn’t have the same ring to it, though. 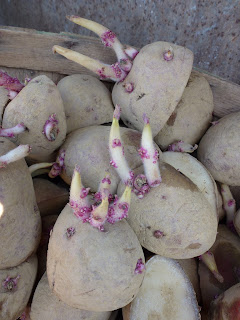 After we purchase the seed potatoes, we plan for our planting days.  Just prior to planting, the potatoes are cut into egg-sized chunks.  This grants many pieces that will each be a potential potato plant, every one yielding many (hopefully) tubers. When the potatoes are cut, each piece must have at least one sprout on it, they are called “eyes”…that is the beginning of the new plant. You can’t leave the cut spuds too long before planting or they dry out too much and become useless. 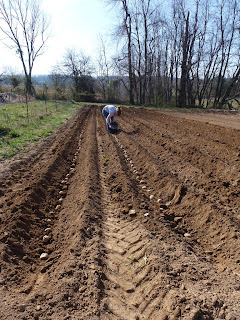 In order to plant the potato crop, the Boss plows, tills and then goes back and digs a deep furrow for the potatoes.  Then the potatoes pieces are placed in the row, hopefully sprout side UP, about a foot apart.  That’s my job.  I walk backward in the furrow, so that I don’t compact the freshly plowed soil, plunking the potatoes.

Then the Boss rakes the loose soil back over the rows.  First he rakes down one side…then the other.  By this time, I have finished plunking and have started helping him with my own rake. It is my opinion that this is the origin of “a long row to hoe”! 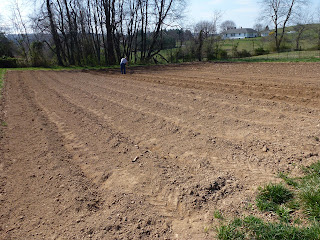 Once all the furrows have become small mounds, our work in the potato patch is done.  Then all we can do is wait for the rain, sun and passage of time to “do their thing”.  In about 60 days, there will be new potatoes in the garden.  Nothing can compare to fresh, “new” potatoes with their delicate skin and silky texture.  When they are topped with a bit of butter and salt, we are talking food perfection!

Sometimes, when I look back…those rows look kinda long.  One year, ages ago, we had the girls compute the row feet (sneaky math lesson).  It came out to 2/3 of a mile!  WOW.  They were impressed with themselves, to say the least.  Since I don’t have to complete any math lessons…I can’t say if we plant that much anymore.  I know we don’t plant that much at one time, although our multiple plantings may well surpass that number.  There’s something to be said for a great number of small, manageable tasks.

During the time the potatoes are growing, the Boss generally “hills” them at least once.  This means he runs the tiller (with a special attachment) down the center of the row, pushing fresh dirt up over the growing plants.  This allows the plants to make better, bigger (and hopefully MORE) tubers before we dig them later. It also keeps the weed pressure on the potato crop to a manageable level. 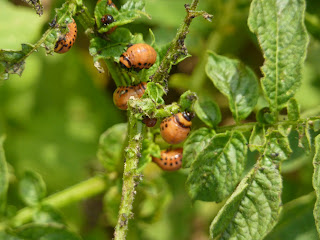 Potatoes are susceptible to their own set of pests.  The Colorado potato beetle is pest #1.  These voracious creatures begin eating as soon as they hatch from their egg and could decimate the crop if left to their own devices.  Most of the time, they can be kept under control by “squishing”…if things get out of hand (and I don’t think this has happened) there are several other organic methods that will get rid of the hideous creatures.

Occasionally, there are issues with small underground varmints, like voles and shrews and mice.  These little creatures happen upon our maturing potato tubers and must rejoice in the newfound food source.  They will chew/burrow right through a potato with little regard for our livelihood.  This renders the potatoes unfit for sale.  Thankfully, the pest problems are generally limited in their scope (and we’re not real picky about our own potatoes), so we have plenty to sell. 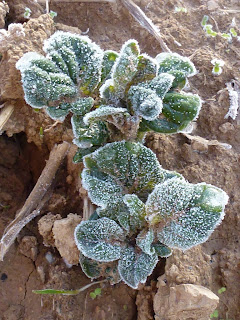 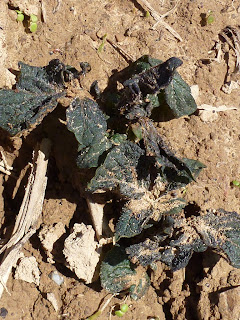 The past week we encountered a problem we had escaped the past few seasons. A HARD FREEZE!  Temperatures fell into the upper twenties for several hours overnight. Potatoes are actually a tropical type plant and don’t handle cold at all well. After the very cold weather Monday night, any young potato plants that had emerged were black and shriveled.  The sight is most disturbing, but does not mean disaster.  The tuber will put forth new green leaves and the tubers will still develop below ground. It just sets the harvest time back slightly. 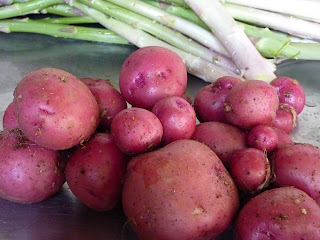 Mid-May, or more likely, early June, will see us digging new potatoes for sale and supper.  That’s when we don’t really mind those long rows to hoe!
Posted by Barbara at 7:11 AM