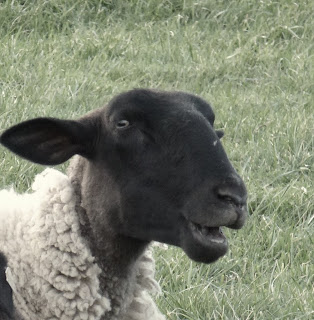 The sheep were beginning to complain.  The sheep were beginning to complain LOUDLY!  They were complaining about the lack of lush green grass in the north-facing paddocks. The truth of the matter was…there wasn’t any grass out front…lush or not.  The combination of cold and wind and forty hungry sheep had pretty much decimated what little grass had been growing in those paddocks. 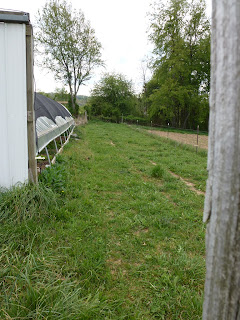 At my insistence, the Boss finally said we could move them out back.  I figured I could simply open the back gate and out they would go.  He figured I would lock them out there with no access to the barn.  I had forgotten there was no fence to protect the precious hoophouse crops, and he had forgotten that the lambs still needed access to the creep feeder.  Suddenly, we needed to re-think the whole project.

We took a short while to re-group and discuss.  While it has been said that most couples argue over money and sex….most of our “discussions” involve hay and/or grass. Yes, we are indeed that “unique”! 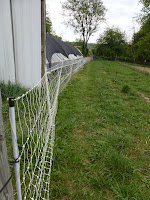 The Boss pulled out the garden tractor, trimmed some grass, put up some electric net, and we ran the sheep down the alley.  We decided they could only stay out back in the daylight hours when we were on hand to divert any disasters involving the hoophouses. The Boss’ great fear is that they would somehow get out and eat up all our profits. 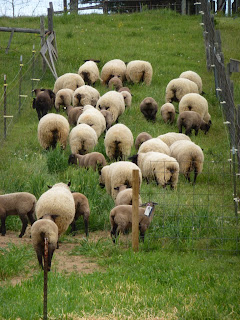 My great fear is that they will eat themselves sick.  The grass out back is SO green and lush, we cannot allow them to graze without some type of restriction, or they would indeed make themselves sick. Grass tetany is a very real concern this time of year. This is caused by a magnesium deficiency and exacerbated by rich grass.  By keeping the sheep somewhat confined and allowing access to hay and minerals, we can keep this risk to a minimum. 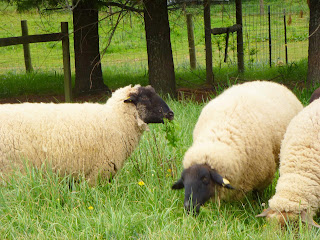 It looked as if they had entered sheep paradise, nirvana…or whatever you would call it.  With grass up over their eyeballs, they acted as if they couldn’t decide what to eat first.  The lambs nipped the seedpods off the grass, while the older ewes gobbled huge mouths full of broad-leafed weeds.  They wandered and munched for hours before they headed back to the barn to lounge and ruminate. 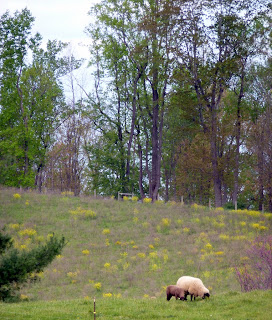 There is nothing quite as picturesque as sheep on fresh green pasture.  The bucolic scene is both relaxing and comforting.  …and wonder of wonders, they are no longer complaining!

Now that the rains have come, the front paddocks are already beginning their regrowth.  This is a wonderful thing, because it is nearly time to wean the lambs. We need lots of grass and lots of distance to work on that project. …and earplugs!  The whole county may need earplugs. 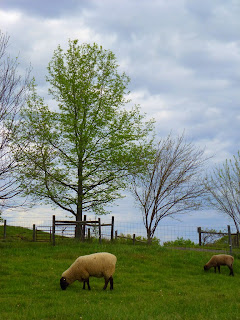 But, for the time being…the sheep and the shepherds are enjoying those green pastures out back.
Posted by Barbara at 6:43 AM