Sometimes, life just gets the better of you.  Sometimes, you just need to learn to laugh and accept things rather than go all crazy trying to control it all.  Yeah, well…that’s what the Boss keeps telling me.  This is a foreign concept to me.

Tuesday was one of those “laugh or go crazy” days.   …and yes, I admit…laughing was NOT my first option. The weather issues of late have done a number on my outlook.

Tuesday was scheduled to be the first “broiler processing” day for the 2012 season.  The Boss' new position as Market Manager for the Staunton/Augusta Farmers’ Market WEDNESDAY market changes the logistics of our operation so we had to go with the plan...no matter what the weather looked like…or we how we felt.  Any small change to “the plan” can have a ripple effect and somehow complicate things far into the future.

Tuesday was COLD and windy.  Ugh!  Not the kind of weather you would pick for “processing” broilers.  The cold water used in processing and the cold wind made for a mind and body numbing combination that made what is usually a fairly short job into a slow, torturous process that seemed to have no end.  My fingers were cold and didn’t seem to work correctly.  The scalder seemed to have trouble staying on temperature…and the chickens seemed to have a million pin-feathers…EACH!  It was not one of our more enjoyable mornings.  However, we finally finished and ate lunch.

After lunch, the clean-up began.  Ordinarily, we get everything completed BEFORE lunch.  The very fact of the late clean-up speaks volumes as to the length of the morning’s activities.

Once the clean-up was finished, I headed down to the hoophouses to start the irrigation for the day.  As I approached the now empty broiler pen, I spotted something round and white in the middle of the pen.  At first I thought that somehow one of the rowcovers had blown inside.   Maybe it was a bucket. I looked closer.  …NO…it can’t be!  Really?

He had no idea why I was bellowing, and assumed the sheep were out and up to some mischief, so he came running.  No, the sheep weren’t out.  But, here in the middle of the pen was a broiler! Somehow, in the morning round-up we had overlooked her. Neither one of us could figure how it happened. Now, what?

Neither of us wanted to start the whole “processing” deal for one chicken…but, what to do with her?  It seemed a waste to just “do her in.”  She couldn’t stay by herself and the hens would probably kill her if we put her in the henhouse.  Oh, bother!

I figured I should go ahead and water the greens. It would be too easy to get distracted and forget entirely.  We could worry about the chicken later.  I handed her to the Boss and headed off to the hoophouse.  I suppose I was hoping that he would miraculously solve the problem while I turned on the water.

When I got done, I headed up toward the house.  Not so fast.  Why is the Boss crouching in front of the brooder?  No!  He wouldn’t have…

Me: “you didn’t put that broiler hen in with the chicks…did you?”

As I finished the question, I noticed him chuckling to himself.  “yeah…and it’s SO funny! She looks like Baby Huey!” 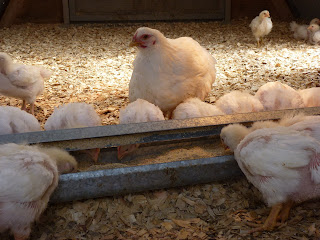 I glanced in the brooder.  There she was in the middle, looking very “Baby Huey-like” among the much smaller chicks. I think I growled.  “WHY?  WHY did you do that?  She doesn’t belong in there!”

He just laughed harder.  “well, what else we gonna do with her?  It will be okay.”

Oh bother!  I continued to growl…and do the wife-eye-roll…all to no avail.

The Boss has wanted to raise a broiler out to some huge weight for a long time.  He wants to see just how big a broiler will get.  We saw one at the fair that supposedly tipped the scales at over 15 pounds.  The Boss has no poultry show ambition, he just wants bragging rights come Thanksgiving supper!  (sorry, vegetarian folks!) 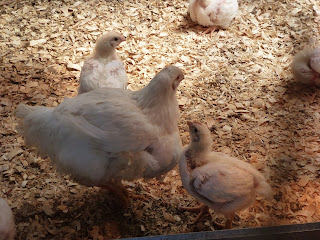 With brains the size of large peas, none of the broilers seemed to notice.  Baby Huey was just intent on eating; she didn’t seem to care where.  Okay, so issue solved.  On to other things.

Everything seemed to be going well until evening.  When I did the night-time rounds to ready everything and everyone up for yet another frigid overnight, things were testy in the brooder.  Apparently, Baby Huey had overcome her trauma and had begun pecking all the smaller chicks anytime they came near her.  Actually, she was pecking them when they were NOT near her.  She was beginning to “rule the roost”.  That wouldn’t do.  The young broilers are entering the stage of their lives where they need to eat pretty much ALL the time.  They certainly couldn’t do this with Baby Huey attacking them.  …and she had a mouthful of feathers…

I captured her, but couldn’t come up with a good solution for housing.  The cats and dogs all joined in the parade to the house.  AH, suddenly the solution hit me!

The greenhouse would be safe, convenient and she couldn’t harm the plants.  Voila!

Earlier, we had thought that her crop looked rather distended.  Handling her made me realize that not only was it distended…it needed some sort of attention.  But, it was getting dark, it was still windy and cold, and I was in no better mood than earlier, so I put her in the greenhouse, gave her food and water and decided to hope for the best.

This morning, she was still perking along in the greenhouse.  But, the distended crop really needed some attention.  A chicken’s crop is sort of like an extension of the esophagus where food collects, breaks down slightly and then proceeds to the gizzard where it is ground into a paste and proceeds through the digestive system.  Occasionally, it gets backed up and digestive difficulties ensue.  Hence, the old expression…”got something stuck in your craw…”

Research indicated that she needed a crop massage and some oil, no some vinegar, no some probiotics (internet research often has too many options)…I decided to go with a “probiotic vinaigrette” …a little of each.  The crop massage seemed to help her some, the distention lessened almost immediately.  She wasn’t too impressed with the oil and vinegar, but she tolerated it and when back to clucking under the propagation tables. 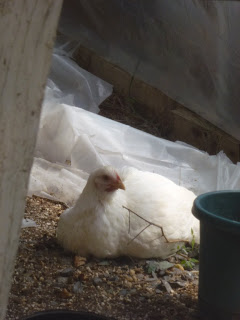 As of this afternoon, she has had two doses, and she seems a little perkier. The plan is to put her back with the younger chicks when they go out on grass next week and process them all in about a month.  Perhaps the addition food source will keep her from pecking the other chickens.

At that time, the science experiment will continue.  It remains to be seen if the Boss will get his “turkey-sized” broiler for T’giving. I’ll have to keep you posted.

I never thought we would have a chicken in the greenhouse, let alone a chicken that smells like salad dressing in the greenhouse.  This place has taken another step toward being the FUNNY FARM.  I’m trying to embrace the old adage….”if you can’t beat ‘em….join ‘em!”

(and, yes, I know Baby Huey was a “duck” and a "boy" at that….but, you really think a chicken will know the difference?)
Posted by Barbara at 6:56 AM