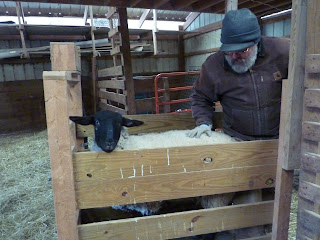 It is nearly lambing time. I really don’t know how the time passed so quickly, but it did…and so we had to get some preparation work done immediately. The ewes must be worked at certain intervals during their gestation time in order to assure healthy lambs.

We needed to vaccinate all the ewes. 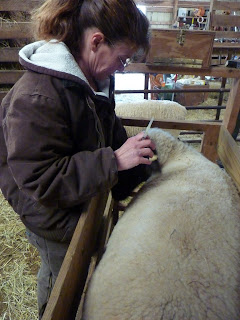 This one shot grants the babies protection from three of the diseases that can swiftly kill newborn lambs. The mothers’ bodies make antibodies that pass through to the lambs giving them a natural immunity.

We packed all the ewes in one stall, 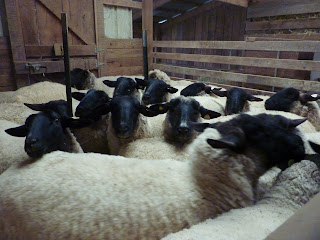 and proceeded to send them through the scale shoot and then allow them to roam around the barn. This worked great until we got about halfway through and the Boss ended up going around in circles to get them into the little opening of the shoot. There was the potential for an all out rodeo that we really did NOT need.

Then, I introduced him to the ultimate handling tool. 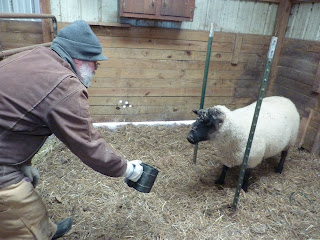 Rather than man-handle them, we began to entice them with food. Forget dogs, leg and neck crooks, rattle that feed scoop and “ya got em every time”!

That worked until the last one. The last sheep ALWAYS freaks out. This one tried going OVER the gate! Thankfully, she finally calmed down, ate her food and got her shot. 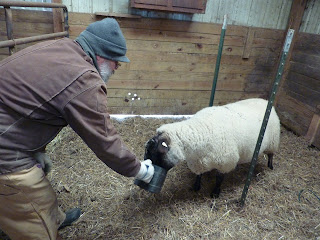 Whew! Finished that one! The Boss has been nursing a bad back, so I was glad to see that he was still able to get around after the rodeo.

He then set about making jugs for the upcoming lambing. 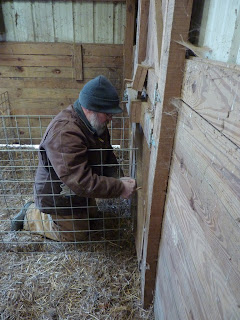 The jugs are tiny “mothering on” pens that will force bonding between the ewe and lambs. Outfitted with heatlamps, the pens also provide a warm, draft-free environment for the newborns. 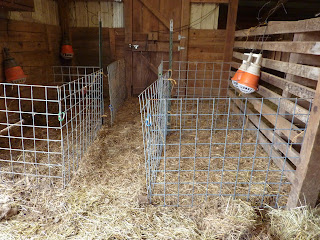 It was good to get all this done prior to the cold weather that arrived this morning. Attempting to work in the bitter cold with swirling snow blowing in one’s face and ewes complaining loudly about the noise and lack of food can be more than anyone would want to experience…especially before breakfast or in a panic in the middle of the night.

Since all the prep work is done, we are in “wait and see” mode until the lambs begin to arrive. That should be sometime next week. Then, we begin the intense phase of shepherding.

A shepherd’s job is never done!
Posted by Barbara at 6:50 AM