Baby, It's COLD Outside! 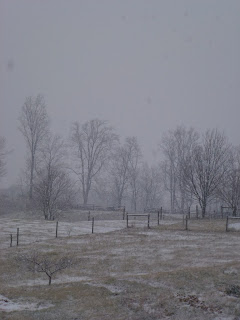 When the mercury dips, the wind begins to howl and the snow begins to fall…we have to go into “winter mode” around here. Thankfully, the season has been oddly mild and somewhat enjoyable so far. But, it is only the beginning of January!

Winter on the farm isn’t all cocoa and cookies while we watch the snowflakes drift lazily past the windows. No, sometimes the weather is an all-out life and death struggle that taxes our bodies as well as our will and determination. Layers of clothing and a different approach to chores make for some interesting times during the winter.

Last week, the low, LOW temperatures got me thinking about farming in winter. When I was done prayin’ for warmer weather, I realized maybe the different work scenario might hold some interest for others. Here’s a run-down on the cold weather plan. It involves coats and coveralls, boots and buckets...and LOTS of trips outside!

The cold temperatures mean two things to the grazing animals of the farm. 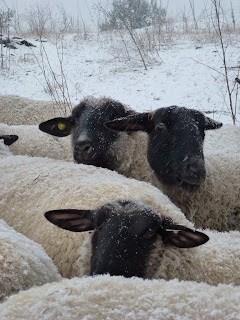 First, there is NOTHING to graze. The frozen ground yields no fresh growth, and with all those hooves walking over it, quickly becomes either a dusty wasteland or frozen pond. It’s time for HAY! The second thing is that it is COLD! The cold, combined with the physical demands of late pregnancy, means that the caloric intake of each animal increases exponentially. It’s time for more HAY!

All that hay we bought and hauled during the summer (and then some) needs to be delivered to the ewes (and ram) for their consumption. The bales are pulled from the stack, hauled into the feeders, baler twine cut and disposed of, twice a day. That's a lot of hay...

The constant consumption of dry hay means the sheep drink a LOT more water than they might when eating lush, green grass. A whole lot more!

Since the sum of cold plus water equals ICE…we generally use a stocktank heater to keep the water ice free. For years we kept a two-by-four next to the stocktank to beat a hole in the ice to allow the animals access to fresh water. A chance remark led us to one of the greatest inventions known to mankind…the small stocktank heater. 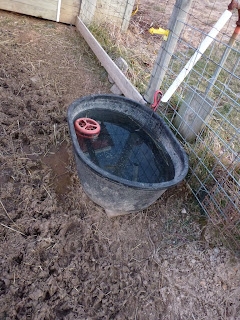 No more hacking away with a 2 x4, shovel or big stick! The water stays ice-free even in the coldest weather.

Unfortunately, this is electric and can cause other “issues”. Presently, the ewes are acting as if it is giving them a mild electric shock when they drink out of the tank. This means they will NOT drink out of the tank. Not a good plan when all they are eating is dry, dry hay and they are heavily pregnant. Back to the frozen stocktank and the two-by-four…

Recently, the temperature was so low that the entire tank turned into a 35-gallon ice cube! After three days of melting, the ice was still over 3 inches thick. 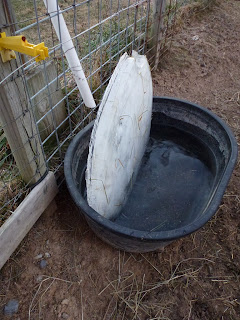 The only solution was to drag another tank out of storage and use that one for a while. When the ewes are in the jug pens, all the buckets freeze…. It is not unusual to have gigantic icecubes scattered about the farm during a cold spell.

The water has to be hauled in buckets, because the hoses and pipes have been rendered inoperable by the cold. A 5-gallon bucket, filled with water, weighs in excess of 40 pounds. Sheep drink a LOT of water in the winter. So, I haul lots of buckets...and break a LOT of ice. 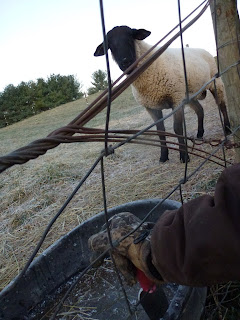 One year, all the water hauling, hay hauling and lamb pulling (story for another time) caused a terrible pain in my back. A visit to the chiropractor fixed me right up…and gave me a chuckle. When he asked what had happened, I told him about hauling water buckets and hay. He looked quizzical and said, “you mean you don’t use the tractor for that?” The mental picture of a tractor loaded with hay and water driving through the barn was truly amusing. Ah, well…

The lambs are born during the cold of winter as well. This is intentional on our part, although it causes some challenges. The lambs born in January and February are robust and ready to graze on their own when the grass comes back in April. This means a trip to the barn every four hours during the 3 to 4 weeks of lambing season. When it is very cold, I go every 2 hours. Thankfully, I have found that I can wear my coveralls OVER my pajamas.

The cold plays havoc in the henhouse as well. Temperatures below freezing cause FROZEN eggs. 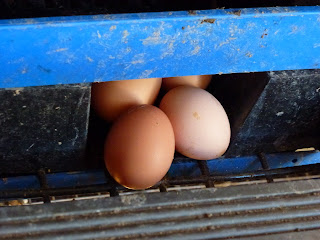 Frozen eggs crack. Cracked eggs should not be sold. So, the Boss sets his timer and gathers eggs every hour or so, depending on the temperatures. Every time he goes to gather eggs, he must bundle up against the cold. It seems that we are always putting on or taking off coats, gloves and boots.

The automatic water system for the chickens is useless during the winter. The irrigation systems for the hoophouses and greenhouses are also inoperable until the temperatures moderate and the warmth thaws the lines. On days that it never gets that warm, we go back to our low tech watering cans. 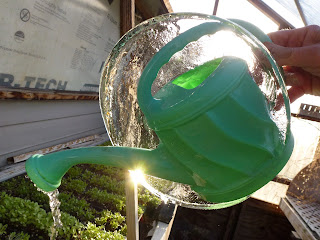 Water buckets are placed strategically around the farm, close enough to a frost-free hydrant to be handy. There is an unspoken rule…”NEVER use a water bucket without replacing it!”

The hens need more attention in the cold weather, as well. Walking around on little, bare chicken feet gets mighty cold. Egg production can go down if they don't have plenty to eat and drink in a convenient spot. Many times over the years the Boss has had to shovel snow from their pen just so they can get outside.

The hoophouses and greenhouses must be constantly monitored. It is possible to go from frozen temperatures and chilly plants to well over 100* on a sunny day in a matter of hours. If we don’t keep up with the changes, we’re dealing with wilted and dying plants. This is NOT good…and I’ve inadvertently “cooked” seedlings more than once.

Snow only adds to the physical effort of chores. Hauling hay, feed and water through inches, or feet, of snow is not fun and down-right tiring. But, there is a deep satisfaction knowing that all our animal charges are well cared for.

While the whole coveralls, coat, boots and gloves routine gets more than a little old, all this wintertime activity is key to our summertime sales.

No time for cocoa, 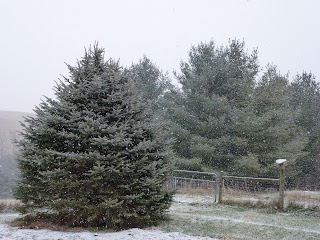