In the Land of Black Cows 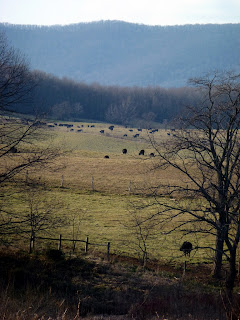 In some parts of the County, the bovine residents outnumber the humans by a fairly large margin. Most of those cows are Angus of some percentage. The proper name for the breed is Aberdeen Angus.

It occurred to me that the cows I take for granted as part of the landscape are actually an integral part of the food supply in this country. The calves born and raised in the fields around here eventually end up as steaks and roasts elsewhere.

But, do you know why they are all black?

There are a lot of cattle breeds. Each has its strengths and special uses. The black and white Holsteins are awesome milk machines. These cows make up the population of most of the dairies. At the end of their productive life, a large number of them end up as hamburgers across the nation, thus filling another need.

The beautiful, brown Jerseys also make up a portion of the dairy population. They are known for their high butterfat content. Some dairies are changing over to a larger number of these cows. While their production isn’t as amazing as the Holsteins, the taste and quality of their milk makes up for it.

But, in the beef world, the black Angus rules. This is the breed that satisfies the beef consumption of this country. There is even a marketing program offering “certified Angus”. Folks just like the taste.

The Angus breed grows out well, requiring less management time than some more “delicate and exotic” breeds. For the farms in the more remote areas of the Valley, this heartiness is a necessary quality. These cows don’t generally need a lot of maintenance. 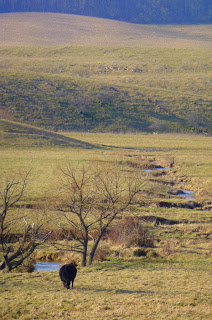 There’s a saying that an Angus will kick first and ask questions later. I can personally attest to this fact. I’ve been kicked, butted and chased by more than one black cow over the years. While this protective quality can cause some management issues, it also means that the survival rate is better than some other breeds.

The cows are fertile, attentive mothers. 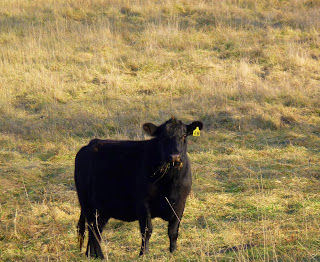 This means that the cattle farmer doesn’t generally need to assist in the birthing process or aid in the mothering of the calves.

The calves grow out well with a large meat to bone ratio. 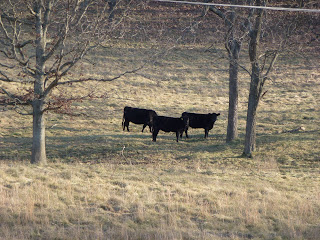 The bulls are just awesome creatures. 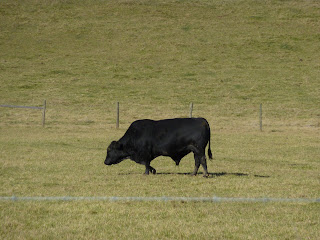 There are a fair number of the red and white Herefords around the Valley, and the longhorns are increasing in number. Both of these breeds make for some tasty meals as well. But, the Angus will probably always rule in the beef world...filling supper plates across the nation... 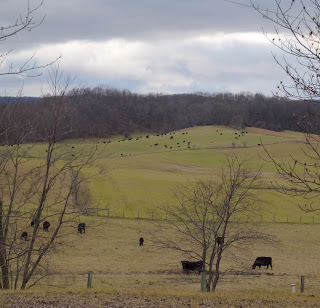 …and outnumbering the humans in parts of the County.
Posted by Barbara at 6:13 AM