Any place that stores grain has its share of vermin. This is just a fact of farm life. The thrill of the hunt gives the cats and dogs something to do.

Mice are a given. Their numbers are legion, but the actual damage they do in the barn area is relatively minor. Their presence in the greenhouse is another story. A single mouse can destroy an entire planting in a single night. Suffice it to say, I hates meeses to pieces!

Rats, on the other hand, cause a good bit of damage with their tunneling and their chewing. They are seen as grosser, creepier and germier than mice. This is not necessarily true and probably has something to do with the whole bubonic plague thing from the Dark Ages. Still, we don’t want them overtaking the barn or surrounding buildings.

Recently, the rats have become an issue around the brooder house. The spilled feed and the relative safety of the pen allow the rat population to flourish. The Boss has begun trapping them and disposing of them with regularity. However, rats are smart and they began tunneling UNDER the trap to get to the bait. He had to put a stop to that. The baited trap was put on a board. As of today, no trapped rats.

With the dogs and cats of the farm, poisons are not considered. We wouldn’t want to inadvertently sicken, or worse, one of the “home team”, so the slow rat trapping project continues. We will probably never completely eradicate them, but population control is essential. Occasionally, we find a dead rat, left for us as a “gift” by our feline friends. While I realize you should accept gifts graciously…dead rats make me say “EWWW!”

The other morning I came upon a big rat when I entered the barn. Squeakie darted past me and took on the rat. 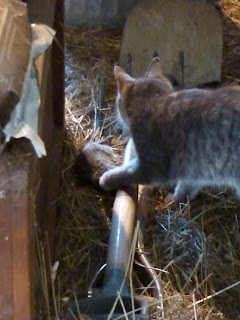 (I realized at this point that it was already dead) She pounced, attacked, and bit. She threw that rat in the air and dragged it around. She seemed quite ferocious. The fact that she is only about 6 pounds and the rat had to weigh a pound made these antics far more impressive. 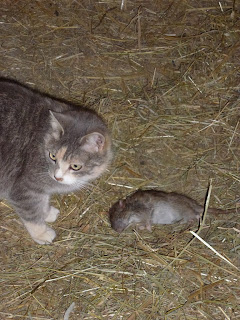 When all was said and done, I disposed of the rat. I am glad Squeakie is on the “home team”, I wouldn’t want to be on the receiving end of her hunting prowess. 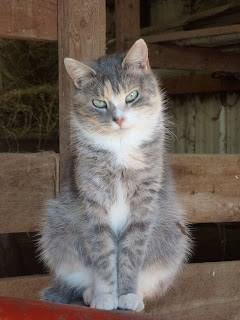