A Day at the Spa - Farm Style

Once a year, THE GIRLS get a new “do” and a mani-pedi…more accurately, a pedi-pedi, as they have four feet and no hands. Oh, I forgot to mention, I AM talking about the EWES! Shearing day has arrived. 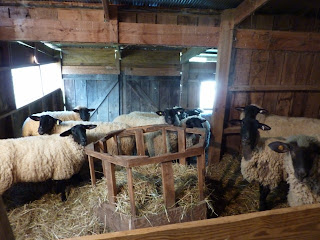 Shearing is a necessary, but difficult job. It’s hot, sticky, smelly and at times, very frustrating. Did I mention it’s HOT? With this in mind, this year I hope we can have a little fun with it. The whole “spa” scenario is somewhat humorous. 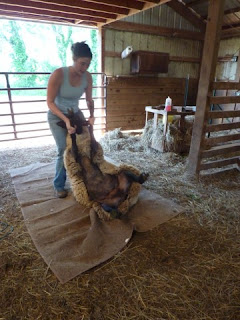 Preparation for shearing starts the evening before the big event. The ewes are brought to the barn to keep them out of the weather until clipping starts. Wet wool doesn’t cut well, and if the sheep have been fasting overnight, theoretically, they will not void while being sheared. The latter tends to happen anyway, the first thing a nervous sheep will do is PEE!

The barn becomes a noisy place prior to the actual shearing, as the ewes realize that they are NOT getting any grain, any hay….and that they are indeed stuck in the barn. Things don’t improve until after the clippers are finally shut off and they head out to the green pastures once again. Their inability to see this as a cleansing fast really affects the whole “spa” atmosphere! 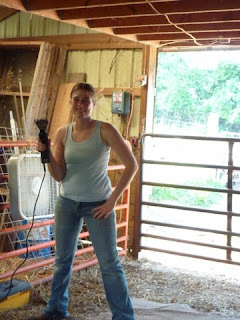 A went to VA Tech to learn to shear a number of years ago. Tom had been doing the shearing, but she thought it looked fun. She excelled at the class, and enjoyed the camaraderie with the instructors. While spa patrons are pampered and treated well, the advice A got for any uncooperative sheep was “punch that ole girl in the stomach if she don’t behave!” 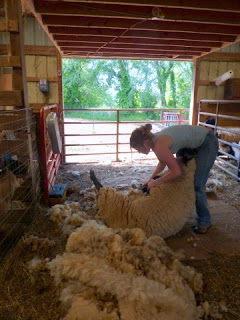 This advice is rarely heeded, but it does grant a chuckle when things get testy.


I get the job of “manicurist”. 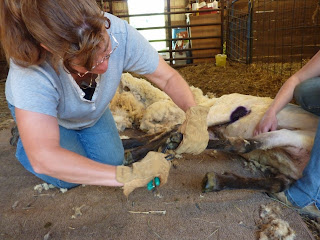 The ewes’ hooves are trimmed and a proprietary mixture is applied to the fresh cut. This will prevent any organism from entering the hoof and causing foot rot. It is also a very pretty shade of RED!

After shearing, there is a great deal of confusion within the flock. I have never been able to figure out if the sheep don’t recognize one another without their wool, or perhaps there’s some jealousy going on about the new “do’s”. 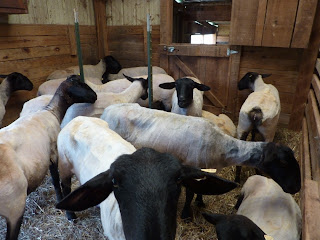 The ewes were all clipped out without incident. Although, I am guessing that A has some real sore muscles this morning. The wool was picked up and bagged, ready to head to the dump. There is no real value to the wool from our type of sheep, so it’s not worth the added work to keep it clean and ship it off to any mill. 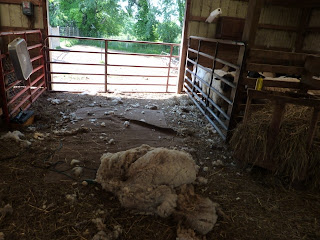 Waylon got sheared as well. As a young, growing ram, he will benefit greatly from his lack of wool during the summer. We want him to grow, grow, grow for the next couple of months prior to his first breeding season. He has been separated from the lamb flock and will be spending the summer in the ram paddock. Now that he is shorn, we can see how good his confirmation is. 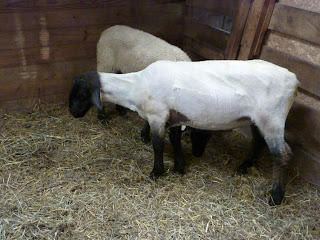 It’s always nice to have the shearing job done. As the summer weather gets hotter and hotter, it’s good to know that the sheep will be somewhat cool and in good condition when breeding season comes around again.

After about two weeks the sheep look great. That period of time allows for any nicks and scrapes from shearing to heal over, and the wool evens out. The contrast between the green, green grass of June and the white wool of the sheep is one of my favorite views on the farm.
Posted by Barbara at 6:03 AM