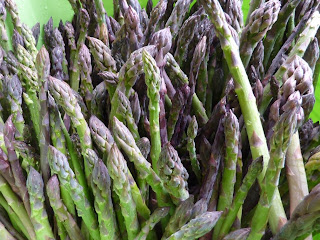 To asparagus lovers everywhere, the knowledge of the short season somehow makes the pleasure a little greater. Asparagus season is about eight weeks in the early spring. Nothing can be done to prolong it, so you must enjoy it to the full during that time.

I don’t know who discovered the edibility of asparagus, but I do thank him or her! There is nothing quite like the taste of fresh asparagus. I’m not sure who developed the hybridization of asparagus, but that individual has my gratitude as well. The hybrids produce consistently and quite well. 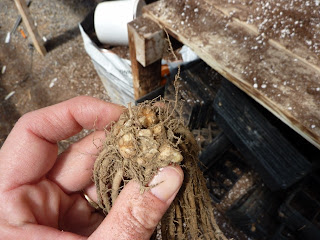 We have been meaning to expand the asparagus patch for several seasons, and hopefully, this year we will finally get it done. We order “crowns” for early spring delivery. When we get asparagus crowns, they don’t look like much. A bunch of dry strings tied together show about as much promise of a meal, if you ask me.

This year, it was so wet, that we couldn’t get the ground tilled when the crowns arrived. I planted them in pots, hoping that they would gain some growth. The plan was to then plant them in the asparagus patch when the weather broke. Well, they’re still in the hoophouse. They are looking pretty good, so hopefully, they’ll do well when (and if) we ever get them planted where they’re supposed to be.

It is said that a well-tended asparagus patch will produce for 25 years or more. This remains to be seen around here, as the current patch is only in its …..Hmmm, tenth? Eleventh? Twelfth? Season.

Asparagus likes a LOT of fertilization. That’s not a problem around here. We’ve got a lot of four-legged fertilizers. No, the problem is the weeds like the fertilization as well. We end up with SUPERweeds in the asparagus patch. We’re always looking for a new way to beat the weeds…that does NOT include herbicides. 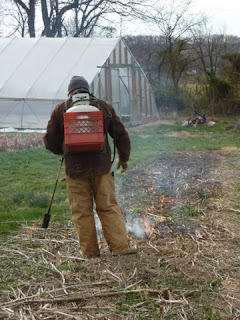 Tom burns the weeds in the spring and applies compost. Unfortunately, this year, the wet spring caused the compost to mat and bend the asparagus. So, I pulled it off. That, in turn, allowed the weeds to grow like crazy. As Charlie Brown would say, “ARGH!”

This year, I think we’re going to try WEEDING later in the season and applying the compost going into the winter. It’s worth a try. I don’t think we’ve tried that set-up yet. I guess we could resort to using the bush-hog. We did that one year and got FALL asparagus. Cool experiment that tasted delicious, but not so good for the plants. 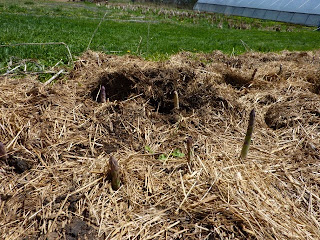 In the meantime, our customers will get to enjoy the fruits of our labors. During the short season, we pick asparagus stalks daily. After a rain, they seem to appear from nowhere! 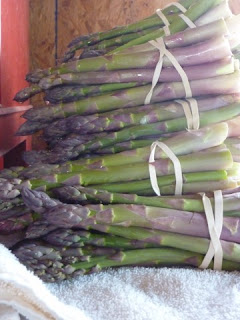 Happily, there are some asparagus that for one reason or another aren’t quite up to standard. 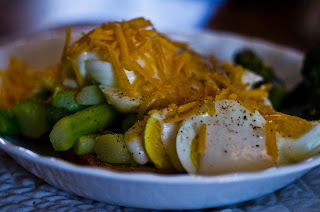 That means….SUPPER!
Posted by Barbara at 4:47 PM