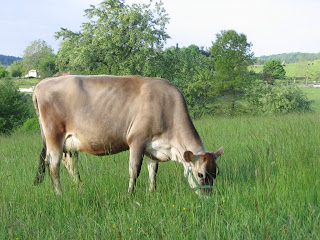 It’s the first of June, "National Dairy Month". This month is set aside to remind us all where milk (and milk products) come from. The dairy princesses will be on call to hand out icecream and point out that family dairies are still out there…and still the only places that produce milk. The emphasis on cows has me feeling a little nostalgic. I miss my cows!

I met my first cow when I was about five years old and visiting the county fair. I think it was love at first sight, and since then, I’ve always been partial to Jersey cows with their BIG brown eyes. I knew then and there that I NEEDED to have a milk cow some day. My literary diet at the time was influenced greatly by The Little House on the Prairie books and Countryside magazine. Why WOULDN’T you want a milk cow? I honestly thought EVERYONE would want a milk cow!

I tried to convince my dad to let me keep and milk the Hereford heifer he bought for meat. Thinking I was only trying to save her from the “hamburger factory”, he was quite dismissive. For years, I would daydream about having a cow of my own.

It wasn’t until October 1997 that I finally realized that dream. We met someone with a “family cow” for sale and Tom graciously obliged me. Having a dairy cow was nothing like I had envisioned. It was hard work and there was a definite learning curve. 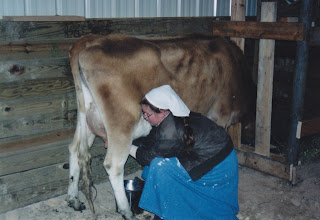 The first milking, I was only able to obtain 1 quart of milk. I cannot remember how long it took, but I do remember feeling like a miserable failure…wondering if my dream wasn’t really a nightmare. But, I was determined to figure the whole deal out. I saw myself making butter, cheese, and having gallons and gallons of milk to drink! There was a lot of truth in that vision.

We had at least one milk cow until May 2009. At one point I was milking three cows…yes, by hand! I had some very nimble fingers…and sometimes VERY sore forearms! We had gallons and gallons and GALLONS of milk, that’s for sure! That May, we sold “Penny”, our home-grown, beautiful, productive, Jersey cow to a family out in West Augusta. Life on the farm had changed, and it was time for us to move on. In some ways, it was very sad…and I wish we still had our “girls”. On the other hand, it was very freeing…and we’re enjoying the current adventure. 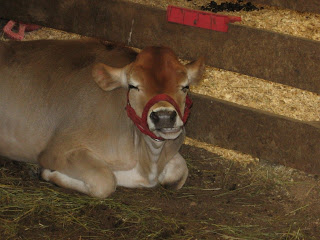 During the ten-plus years we had the cows, I learned a whole lot. Despite the fact that we almost lost the first cow to milk fever due to my ignorance, by the end of our “dairying days”, I had learned enough to earn the respect of our very old-school vet. It meant SO much to me when he went from calling me “Miz Womack” to Barbara…and the day he said “you really know your cows” is forever in my memory. He went from being “the vet” to a friend of the family. 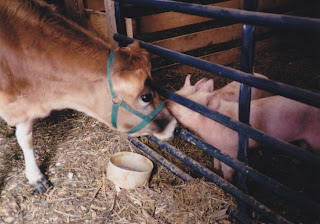 Over the years, we had a lot of good times and some GREAT eating because of the cows. We also had some of the worst calamities in farm history. They definitely added to the atmosphere of the place. We once brought a cow up I-81 in the back of the pick-up all the way from Pearisburg, VA. 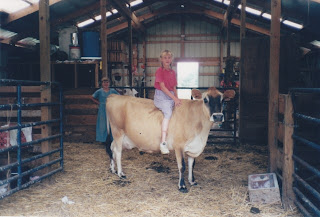 Tom and I had the uncanny experience of walking in a field with over one hundred dairy cows and their farmer, as he took them to a new paddock. We helped birth calves and learned how to get the cows bred. Each of those experiences is worthy of its own entry at some time.

But, back to dairy month…

Over the years, we have had the privilege to meet some dairy farmers and their families. All farmers are dedicated to what they do, but dairy farmers must be the MOST dedicated and committed. Those cows MUST be milked twice a day (in some dairies, 3 times) EVERY day! It is not possible to tell a dairy cow to “take the day off”! That’s hard work…I know from experience.

So, as we all recognize dairy month with a little extra ice cream…or maybe a big glass of milk…think about those farm families. Say “THANK YOU!”

…and DRINK YOUR MILK!
Posted by Barbara at 7:13 PM