Eight Weeks to An Excellent Meal 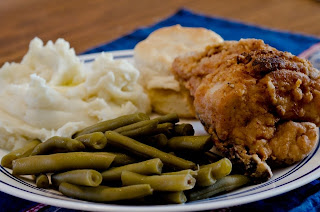 There is quite possibly no meal finer than homemade fried chicken with all the trimmings. The meal is even better with homegrown chicken. The best bird for the job is called a “broiler”.

In the poultry industry, millions of chickens are processed on a daily basis for use in all dishes chicken, from “Mcnuggets” to fancy “Chicken Cordon Bleu”. Because the industry needs a bird that consistently grows quickly and well, Cornish and White Rock chickens were cross-bred to give what is generally referred to as a “broiler”. These chickens are bred to eat and grow…and grow…and grow! Eating machines, that’s the best description for them.

I remember raising chickens when I was a little girl.

Dad and I butchered, plucked and cut up at least 50 chickens at one time. It was a hot, smelly mess in the basement on a summer afternoon. No specialized equipment for us…a pot of boiling water and a knife…that was about it. This was long before the tender broilers entered the market. We were just getting rid of a bunch of roosters. Never the one to let anything go to waste, dad figured we should put them in the freezer.

Through some type of miscommunication, we had ended up with at least 100 straight run chicks all at once. To my mother’s credit, she put them all in a big box in her kitchen for more than a few days. My remembrance of the story was that a WHOLE bunch of them were roosters! (as in well over 75%!)

It was kind of disappointing to see just how small the carcasses were once the feathers were gone. At the same time, the idea of growing our own food was appealing to me. I particularly liked the fact that it was my “toughness” that Dad relied on for this job. I distinctly remember helping him more than once.

When we started raising our own birds here on the hill, we got a bunch of broiler chicks. These things were SO different than the chickens of my childhood. They were big, fat chicks to start with…in very short order they got MUCH bigger and MUCH fatter. It was amazing! Oh, and when they were ready to “harvest”, they were delicious! 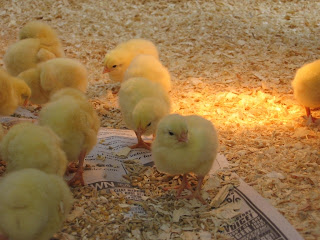 Currently, we order our chicks from a hatchery in PA. They put the chicks in the mail immediately after they hatch. They arrive at our post office within two days. The post office calls and alerts us to their arrival; we drive down the hill and pick them up. From there, they go in the brooder for a while. They are put under lights for heat and given fresh water and plenty of food. Within a week of their arrival, they have begun to feather out. Generally, we get them out on grass within 3 weeks. The pen is moved to fresh grass on a regular basis. 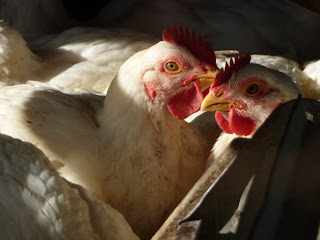 Unlike other breeds of chickens, the broilers don’t scratch around in the grass much, or even look for bugs. Some of the bigger ones will just plunk down by the feeder and eat, and eat, and eat.


At eight weeks of age, we process the broilers. That means we kill them, scald them, pluck them, and eviscerate them. 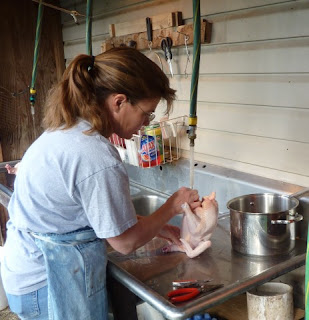 Then they are soaked in ice water, thoroughly chilled and frozen (whole or halves) and offered for sale at the Market.

Ready for the consumer to make into any of a number of delicious chicken recipes! That would be fried chicken, boiled chicken, chicken fricassee, chicken gumbo, chicken bar-b-que… 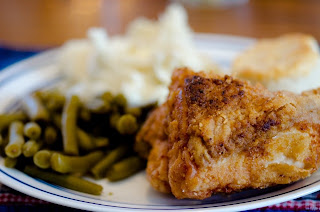 (thanks, Tom, for the pictures of the delicious chicken!)
Posted by Barbara at 6:26 AM