There are perhaps a million reasons I could list for not getting my work done. But, most of the time it’s my own fault for lacking focus, for being so very easily distracted.

But, singing IS distracting.  Not my own singing…that’s far worse than distracting…but, that’s not the subject.

Someone was singing…loudly…the sound seemed to fill the office as I tried to work.  I really didn’t mind the distraction and the sound was nice, but where was it coming from?

No, it wasn’t the Boss.  He was quietly working on his side of the office. But, he heard it, too and commented on it.

I looked out the window. No one was in sight.

I sat down.  It started again.  It seemed to get louder.

I looked again.  Nothing.

I went outside, checked the apple tree next to the house, the top of the shed, the fenceline…nothing. But, I could still hear it.

Then, I found the performer… 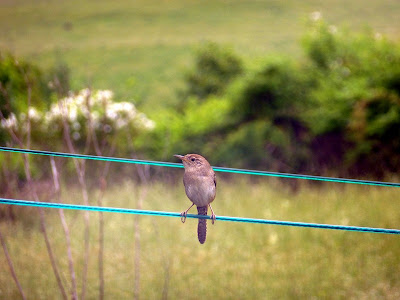 It was a little house wren, singing with all his might.  Singing to impress….oh look….little Mrs. House wren!

…and they weren’t in the apple tree, or on top the shed, or along the fenceline.  They had chosen to build their nest INSIDE the pipe---the metal tube---that is the top of the clothesline pole!  I couldn’t believe that they would fit.  But, watch this! (It’s not great quality; I shot it through the office window.  And, as you can probably tell, window washing is not a real high priority around here)

Okay, I was hooked.  How often do you get to do any birdwatching from the office window?  The bookwork could wait. 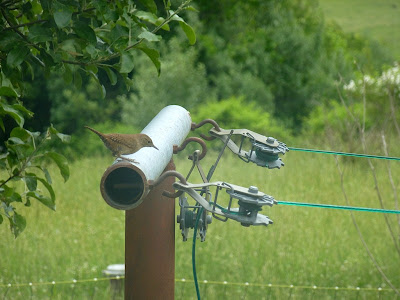 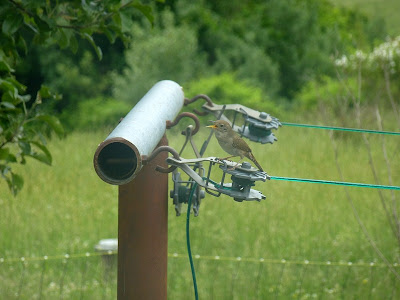 Mr. Wren would sing.  Mrs. Wren would answer.  They were quite animated and it was amusing.  However, this wasn’t the joyful singing of courtship…something else was going on. 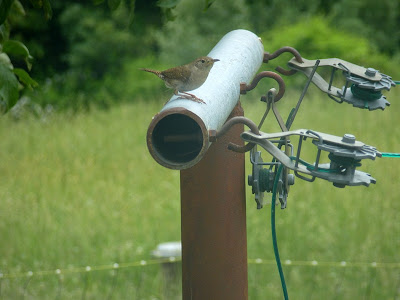 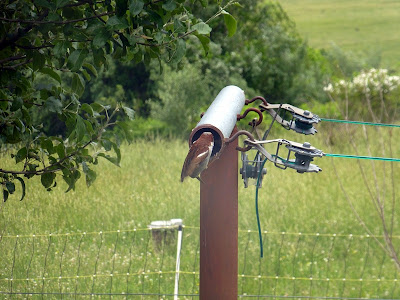 Suddenly, a villain appeared.  (cue the bad guy music) A sparrow came flying in to “check things out”.

Sparrows are notorious for stealing housing from the other little birds and a lot of people hold the entire population in great contempt.  I understand why.

I figured that the wren’s chosen home was safe since the sparrow was a much bigger bird.  But, no…somehow, he squeezed in the little tube and poked around.

Mr. and Mrs. Wren were getting quite shrill at this point.  As the sparrow came out, they flew at him repeatedly, not seeming to notice the size difference.

Eventually (about a thousand frames later…that really is an exaggeration) the sparrow finally gave up. 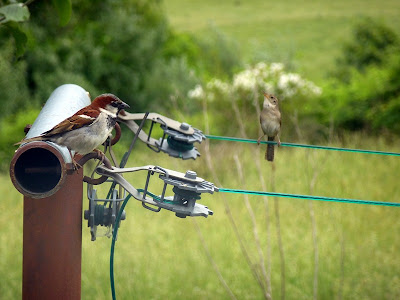 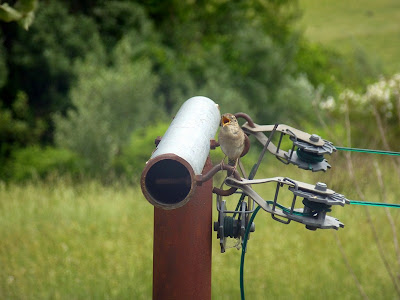 Mrs. Wren went back to her nest-building/house-cleaning. 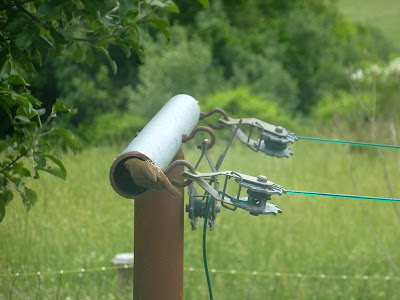 well, I was left trying to remember what I was supposed to be doing in the first place!
**the incident occurred earlier this summer...the wrens were successful in raising their family.  The fledglings are grown now and singing all around the farm.**