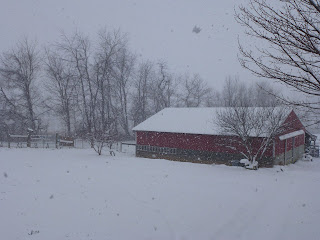 For the life of me, I can’t look out at a snowy day and say “oh goodie! A snow day! Let’s make cookies and cocoa!” No, I’m usually scrounging around for another pair of gloves or socks, and trudging off to the barn wishing the white stuff would just go away. That makes me feel just a little bad, but I don’t know any farmers who are snow lovers. 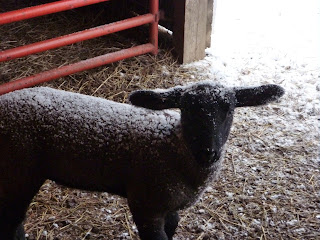 Winter is hard on the farm. It’s hard on the animals. …and face it, it’s hard on the farmers. The freezing temperatures cause all sorts of difficulties with equipment as well as routines. The animals need far more food just to keep them alive and thriving. All the feed and water hauling, the upkeep and maintenance, take their toll on us. A snowstorm only intensifies the difficulties and often creates new ones. Working in the cold and wet is not fun. I would much rather have spring, summer or fall.

Most of the farm inhabitants seem to agree with me. The sheep can’t find anything to eat, so they hang out in the barn and complain. 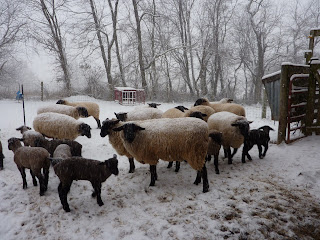 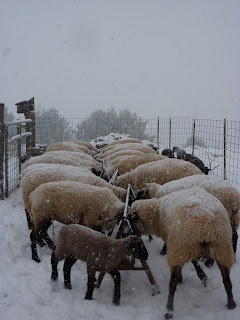 The hay supply is dwindling, and their appetites seem insatiable. The hens’ feet are cold, so they stand first on one foot and then the other. They won't venture out unless the Boss digs a path to the feeders for them. Egg production generally drops along with the temperatures. 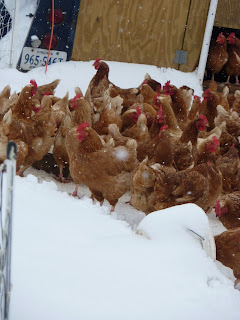 The brooder for the tiny chicks is kept closed all day to conserve heat. Jed and Ellie are the only ones who seem to truly enjoy the cold and snow. 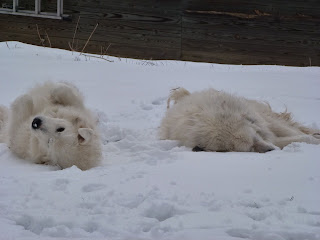 The greenhouses, where warmth and light are crucial, are dark and cold at best. A second layer of cover is provided for the young plants, hoping to keep them growing. Small heaters, generally used only in the cold of night, run all day in order to keep the temperatures just above freezing. 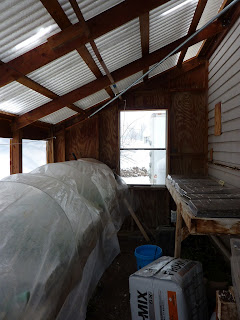 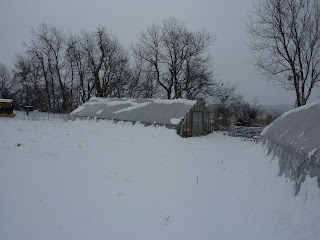 The weight of the snow causes the “skin” of the hoophouses to sag and bow. 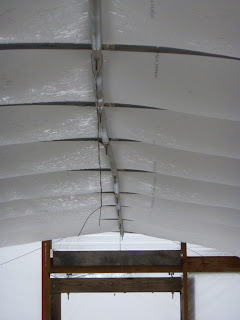 This plastic has some give to it, but can actually cave in if the strain becomes too great. It is a crucial judgment call as to when and how to remove the snow from the structures. The weight of a heavy, wet snow is a real concern. Again, extra cover is placed over the young plants as a small token of protection from the frigid temperatures. The dark and cold do nothing to aid the growth so necessary for growth. …and we are about a month from opening day of the Market. 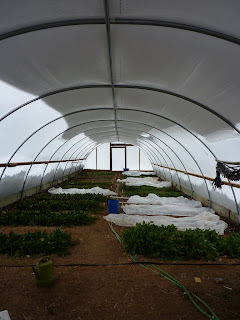 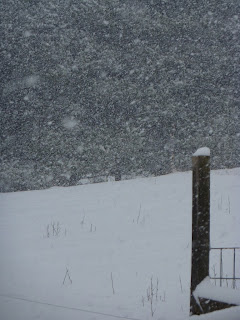 There is one good thing about a March snow. It generally doesn’t last long. The snow came down fast and furious in the morning, but by afternoon it began to melt in earnest. The hoophouses and greenhouses are snow-free and tomorrow they should be warm and bright once more. 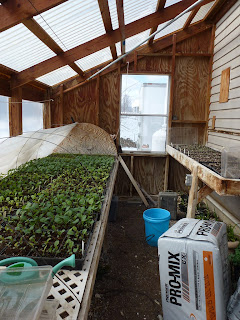 With the snow behind us, we can get to the feed store in the morning, purchasing some much needed food for the sheep and chickens. Paper feed sacks and heavy wet snow are not a good mix, so the plan for a Monday trip to town had to be aborted. This in turn affected the trip to get hay. 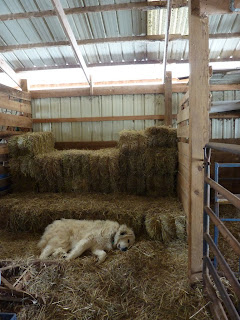 The hay trailer was buried in snow, so we will put that trip off,too. But, the hay supply will be replenished on Wednesday with a trip to Fort. The sheep might act as if they were starving, but that was never a real danger. 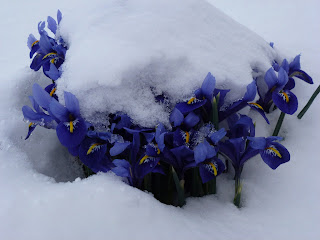 …and it’s just two weeks until Spring!
Posted by Barbara at 6:43 AM