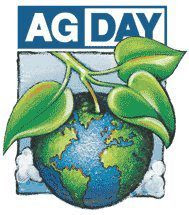 In one of life’s more humorous ironies, I find that despite my deep connection with agriculture, I have never managed to note the special day throughout the years. It would have passed by again this year, if not for one of my non-agricultural friend’s status on Facebook!

According to the dictionary: “Agriculture is the science and art of cultivating the soil, producing crops and raising livestock.” (New World Dictionary, third college edition)

National Ag Day was started back in 1973 by the Agriculture Council of American in hopes of increasing public awareness of agriculture’s vital role in our society. I was totally unaware of this fact.

In 1973, I was in the third grade, where I was the odd little kid who baffled the teacher by knowing the different types of grass that were in a bale of hay. I had entertained teachers and students alike by bringing baby goats and bunnies and other creatures for show-n-tell. …and no one ever wanted to trade lunch with me…no pre-packaged stuff for us….home-grown goes back a long way.

My folks were part of the “back to the land” movement of the late 60’s, although I don’t think communing with nature had anything to do with their decision. We had cows and chickens, goats and pigs…and a huge garden. I never thought of this as agriculture.

Our property backed up to a cattle farm, a fairly large cattle farm. Now, THAT was agriculture. At the time, that county was one of the largest cattle producers in the state. We were surrounded by agriculture, despite the encroaching suburbia.

As life moved on, my ties to the land lessened. It wasn’t until the Boss and I had our own children that we began getting “back to the land” ourselves. Although a garden was always a given. We added chickens and goats and began to learn new skills and experiment with new crops. Our appreciation for and involvement in agriculture grew greatly.

When the girls were still young, I had the opportunity to teach a course in our homeschool co-op. A friend and I were quite taken with a curriculum based on the “little house books”. Our little group of kindergarten children were exposed to all sorts of skills and subjects during our reading about life on the prairie. The one activity that made the biggest impression was when we had the children start seeds. Each child was given three seeds: a bean, corn and cabbage seed. When they planted these in little Dixie cups, they got to see firsthand the amazing act of germination. I had been doing this “forever” and didn’t remember the thrill. Even my own children thought it was pretty humdrum. So, I was taken aback at the comments…particularly from the parents! They were so excited, astounded and downright thrilled that they had witnessed this miracle of life. Some even attempted gardening as a family activity.

When the Ag Council started back in the seventies, the dis-connect between “regular” folks and the farming community was already an issue. The Ag council was hoping with National Ag Day to allow every American to:

Understand how food and fiber products are produced.
Appreciate the role agriculture plays in providing safe, abundant and affordable products.
Value the essential role of agriculture in maintaining a strong economy.
Acknowledge and consider career opportunities in the agriculture, food and fiber industry.

Now, that we are in the Valley, we are not only surrounded by agriculture, we are completely immersed in it. We consider it a privilege to count ourselves among the farm population of the state, making up a part of the agricultural community…the largest influence on the economy by far. Food, clothing and shelter are all direct products of agriculture.

It just occurred to me that I haven’t missed Ag Day all these years…I’ve been living it every day!

Happy Ag Day, everyone!
Posted by Barbara at 7:05 PM