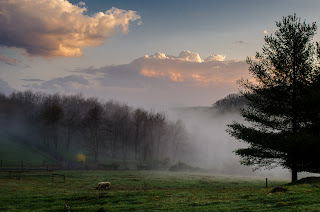 During morning chores, we often see beautiful sunrises…snowfalls…rainbows…birds in flight or any of a number of wondrous sights. That is one of the benefits of a job that requires such early hours. The other morning was no exception, as the clouds had an opalescent appearance and the sky was a pale pink. The Boss and I commented on the beautiful sky and went about our chores.

I promptly forgot all about the loveliness, as I hassled with the sheep, fed the dogs and checked on the hoophouses. Everywhere I went I saw another job I had not gotten to, and another item (or ten) that should be added to the “to-do” list. Then, I started thinking about breakfast, hmmmm…..what to have? That made me remember that I needed to get something out for supper, which led me to look in the freezer (that STILL needs cleaning). The day was off and running, with or without me.

Later, when the Boss and I were in the office, catching up on correspondence and farm records, he said that one of his friends had really liked the photo he posted. Photo? What photo? Apparently, as his chores led back to the house, he took the opportunity to take a picture of the morning. When he posted it, his photography friends were very impressed. …and, so was I.

Yes, this is where we live, where we work, where we spend the vast majority of our time. Isn’t it beautiful? We are very blessed.

This photo has been copied and will hang in the livingroom. It’s going there not just because it is so gorgeous (it is)…but, to remind me to take a minute and really look…and really appreciate what we have. Far too often, I get caught up and then bogged down by the little things. The minutiae will always be there…the moments of sheer beauty are fleeting at best.

I’m sure glad the Boss captured this one!
Posted by Barbara at 6:47 AM