There Goes the Neighborhood

I’ve suspected that they were out there for some time now.

I could hear the distant yipping on cold winter nights as I walked to the barn during lambing season. It’s an eerie sound that does nothing to encourage any sense of security for those in my care.

Earlier this week, the yipping seemed closer, much closer. The dogs heard it as well and began to patrol in earnest, pawing earth and barking at the sound. There was nothing to see as I peered into the darkness.

On our daily walk, the Boss and I generally venture a good way down Mishbarn Road. He contends it’s a boring walk, but we see neighbors and the occasional natural wonder. We get a chance to talk and exercise that is not just a part of our workday.

The road crew recently graded the sides of the road in places. I have absolutely no idea as to what the purpose of this project could have been, but it kept the dogs occupied during the day for a while as they barked and patrolled in response to all the equipment beeping down the road.

The freshly graded roadsides revealed a great number of things. There was the culvert that ran down the road that we had never seen, lots of ancient trash, some huge boulders, and… 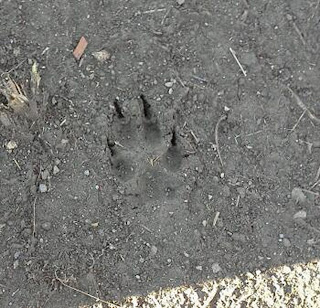 There they were, bold as day, perfectly formed in the newly graded roadside. Oddly enough, they were spotted in the area I would have indicated as the source of the sound I heard the night before. Not too close to the farm, but closer than they had been spotted previously. Thankfully, they were headed toward the mountain and not this direction.

Coyotes are one addition to the neighborhood that any shepherd NEVER wants to see!
Posted by Barbara at 2:53 AM