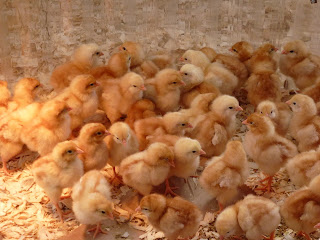 It seems like only yesterday that “Shirley the postoffice lady” called to tell us the chicks had arrived and could we PLEASE come get them before the village was deafened forever by their very vocal complaining. That small box was making an uncanny amount of noise.

It seems only yesterday that we settled the little golden balls of fluff in the brooder where they would live and grow in warmth and safety until time to move in with the hens to begin the egg production part of their lives.

In reality, it was the first week of October, and they’ve been eating and growing and thriving in the brooder house all this time. 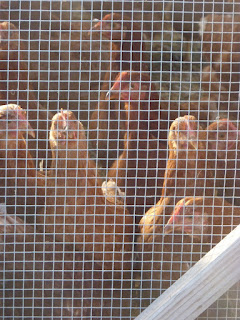 It takes about 18 to 22 weeks for a chicken to go from being IN an egg to LAYING eggs. Another wonder of nature.

Time for the big move and their introduction to the henhouse arrived last week. As they were nearly grown, the brooder had become cramped and distasteful. (okay, okay….REALLY, REALLY gross!) Once the Boss discovered there was a rat living IN the brooder, the moving became a priority.

Since I am shorter, I got the job of catching the pullets. 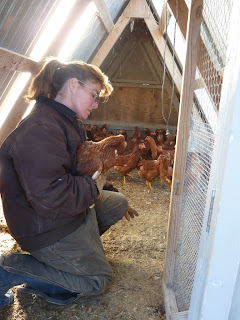 It’s a dusty, frustrating, and loud job. If you have ever wondered why we use the expression “chicken” to describe when someone if fearful of doing something…try to catch a few chickens…then you’ll understand. They run and fly and squawk and flap around. They don’t seem to realize if they would just cooperate it would be easier for everyone.

Each pullet was caught individually. Then, we trimmed the wing feathers on ONE wing…this is supposed to prevent flying. 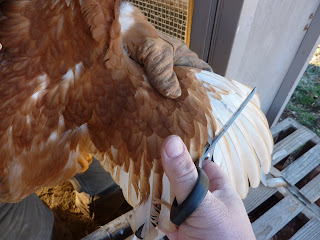 The jury is still out on that one…occasionally they still find a way to escape.

Each one of the girls also got a “pretty blue anklet”. This leg band identifies the hens as this year’s birds. 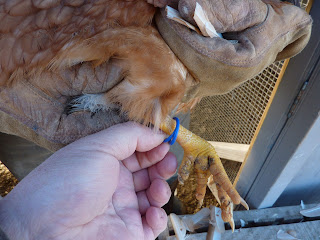 In order to keep egg production at a high level, the birds are culled after a period of time.

We crated them and transported them to be housed with the rest of the layers. 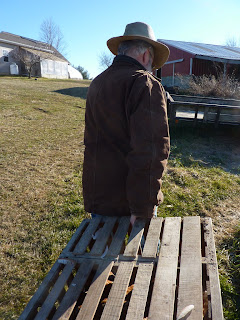 To ease the pains of introduction, the Boss devised a small pen within the super-duper henhouse where the pullets spent a few days (with food and water) acclimating to their new home.

After a couple of days, they began to venture out and mingle with the older birds. So far, there has not been a lot of pecking and shrieking like there has been in the past.

Very soon, the new girls will start laying eggs as well. That means we should have LOTS of eggs for Opening Day of the Market. 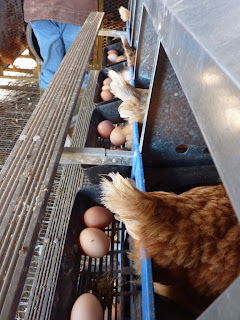 This is just another example of the amount of planning and effort that go into farm products.

..and it seems like only yesterday…
Posted by Barbara at 6:07 AM