It's a LONG Story 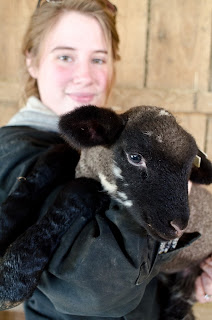 (that's A in the background)

This story will do nothing to promote my “serious farmer” image. But, you know what? That’s okay…because this shows our human side. We’re not always all about growing, selling and making ends meet…no, sometimes we just need a good laugh. But, I’m getting ahead of myself…

For her last year of sheep showing, back in 2009, A got in her mind that she had to show a “speck”. A speck is nothing but a cross-bred sheep that has, well, yes, SPECKLES. She purchased a lamb from a friend who is in the club lamb (the name given lambs bred to show) business and proceeded to raise her and train her in preparation of State Fair. She named the lamb for some country singer, Shania Twain, I believe. It was a beautiful name. The Boss and I couldn’t quite understand the appeal. This was one ugly sheep! 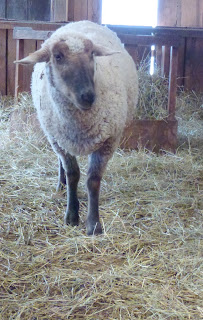 Our opinions were unwarranted, the sheep actually finished third at the fair, much to A’s delight. Proof positive that a sheep show is NOT a beauty pageant!

When the fair was over, A found herself losing interest in the sheep. She was working full-time, pursuing a relationship with “her man”, and testing her wings as a grown-up. It was time to move on to other things for a while. Rather than sell them at the stockyard, we bought out her sheep stock.

I don’ t remember the exact point in time that it happened, but at some point The Boss said, “you know…that sheep looks like a camel!” She did/does indeed. Unlike the rest of the flock’s dramatic black faces against their white wool, this one was/is a sable brown color with little white specks down her neck. She doesn’t fit in with the rest of the flock, and sometimes they act as if they don’t like her at all. Definitely the odd sheep out, she is frequently seen standing along the wall, reaching her thin nose through the slats to eat the hay that is out of reach of the other sheep. 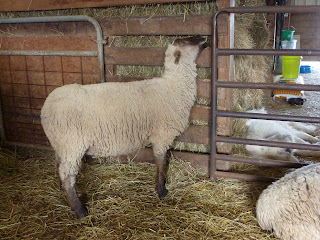 Occasionally she stands on top the feeder, towering over the other sheep, furthering her camel persona.

Not too long after the camel remark, we were watching an episode of M*A*S*H. It just happened to be the one where Klinger had an invisible camel that he called “Habeebi”. Ahhhh…You know what happened! From that point onward, she became “Habeebi” and when the Boss wanted her to go somewhere, he would coax, “Habeebi….brrrrrrt…brrrrrt…” just like Klinger did with his “camel”. It sounds so silly that we both get tickled and any irritation of the moment fades away. Well, okay, I do sometimes do the “eye-roll thing”, but that makes HIM laugh.

Last season, we bred her for the first time, and she proved to be an excellent mother and worthy addition to the farm. While she’ll never win a beauty pageant, she is a productive ewe. She’s here for the long haul.

When Habeebi had her lamb last week, the first thing I heard myself say was “Habeebi had her baby….” Of course, Habeebi’s baby slowly became Habeebi’s beebi…and progressed (or would that be digressed?) to Habeebibeebi.

I must admit, the girls are right; it IS one of our sillier moments. But, it makes us laugh, it draws us together, and it causes us to focus on the positive things that are going on at the barn, despite the times when things go so desperately wrong.

To focus on the positive is a very important thing on the farm. It’s all too easy to get discouraged when things go wrong, money is tight, and the future seems uncertain.

However, that is not possible as long as we have Habeebi and Habeebibeebi in the barn. 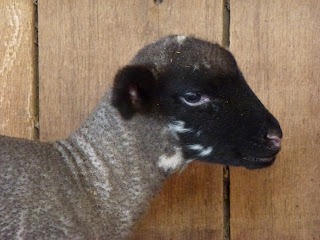 We’re laughing too hard!
Posted by Barbara at 7:02 AM