Recently, I bought a new leather bomber jacket to replace the one the Boss bought me more than 20 years ago. I loved that jacket. It was the perfect weight, it looked cool, and it felt good when I wore it. However, when we moved to the Valley, it became my “chore coat” and saw some pretty rough times.

After four zipper repairs and countless leather treatments, the cuffs finally wore through and the leather cracked beyond repair. It was time to retire my favorite jacket. Words cannot convey the sense of loss that I felt about that dumb jacket.

For several years, I hesitated to replace it. I sorta knew a new one would never be the same. When I finally made the leap, I was unprepared for the total unfamiliarity of what looked like the same jacket. But, why?

Then it hit me. It had no lived in feel…it had no ambience…the very essence of the jacket was missing.

That, in turn, reminded me of a farm visit that will never be forgotten.

Back in ’04, one of our customer-friends asked to bring a group of visitors to the farm. There was a Kenyan educational troupe visiting one of the universities and they wanted to visit some small farms while touring the US. It sounded quite interesting, so the Boss and I obliged. 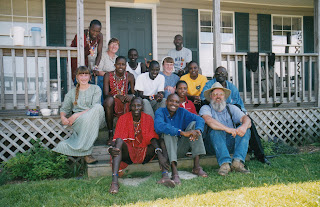 Later, about 10 Kenyans arrived, along with the Professor, to do the “farm tour thing” and eat some freshly made icecream on the porch. We had not anticipated that the Kenyans were indeed Maasai tribesmen and some would be wearing their traditional garb. Oh, and speaking Swahili. Things went well, although it was more than slightly unsettling to attempt to speak to folks who had NO clue what we were saying (and vice versa). They checked out the barn and exclaimed over our hoophouse full of greens. Coming from a farming community, they were very interested in the aspects of small-scale American farming.

Then, they spotted Kuh, our Jersey milk cow. 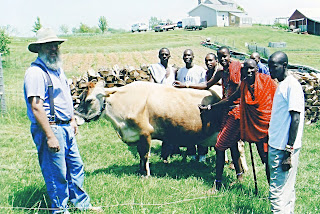 Cows are highly valued among the Maasai, and they had never, ever seen a specimen quite like our Kuh. In their society, wealth is measured by one’s cattle…and Kuh…well, she was so old and fat that I suppose she looked to them like she was worth a fortune! In reality, she was an old, old somewhat spent dairy cow enjoying the last of her productive days and providing us some awesome dairy products.

Kuh was already old when she joined an Amish community in SW Virginia, and even older when she became our cow. The vet couldn’t begin to guess her age; her teeth were so worn down. She was by far the most personable of cows I have ever met. She rode all the way up I-81 from Pearisburg in the back of our pick-up, chewing her cud. When she arrived at the farm, she proceeded to get her nose stuck in a feed scoop and then butt the current cow out of the barn. Yes, Kuh had arrived. She was a hoot! She was loved by all, and mourned when it was time for her to leave the farm.

She endured the Kenyans with the same attitude she approached everything. 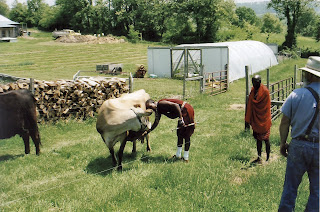 “aaaah, whatever…but, if you feed me….I’ll love you forever.”

They stroked her, handed her grass, pretended to milk her and sang a song to her. That was an unforgettable experience. They sounded like “Ladysmith Black Mambazo” who recorded with Paul Simon during the eighties. It was amazing. I’m fairly certain M’brook had never seen the likes of it. 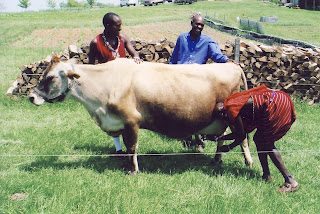 Later, as we wandered out front to look at lambs, one of the chaperones pulled one of the young fellas aside. She indicated that he had little white cow hairs in his own hair. He grinned and began to pick them out. Then he hesitated, sniffed and made some exclamation in Swahili. He looked so genuinely happy that I had to ask what he said. The chaperone hesitated, and then laughingly said, “I smell like a cow…and I am happy!” Oh my goodness…I had found a kindred spirit! There is something comforting about the pleasant (yes, pleasant) smells of the barnyard.

When I chuckled and said “wow, I thought I was the only one who ever thought that!” the chaperone laughed and translated. Then, I attempted to tell him how I just loved my cows. He tried and tried to say “jersey cows”.

It was an odd and amazing visit…we discovered just how small our world really is.

The professor tells me that Massai still speak of the “sweet icecream” on our front porch.

…and now I realize what is wrong with my new jacket. 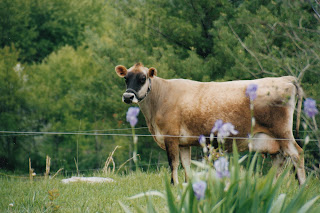