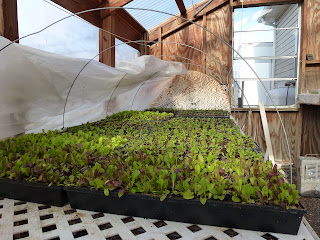 Greenhouse growing is something that we have taught ourselves over the years. No formal training, just a few books, and a LOT of trial and error. One thing was certain…and we didn’t need to read it in a book to know… access to the greenhouse is crucial. I mean, if you can’t get inside…you can’t get anything done…right? Air flow is another necessity. We have fans to stir the air, but we need a constant flow of cool air in the summer. Cross-ventilation is maintained with opened windows in conjunction with the stirring fans.

After the first big snow during the Winter of ’09, the Boss and I were slightly overwhelmed. He began the big dig-out with the tractor, while I attempted to shovel paths hither and thither. This was pre-snowblower days. He was most relieved when our neighbor showed up with his BIG equipment. Our neighbor has taken preparedness to an art form. If he doesn’t have the equipment, he has some kin who does. Tractors, backhoe, dump trucks… We never have to worry about being stranded. Despite the tractor power, it was still a BIG job. 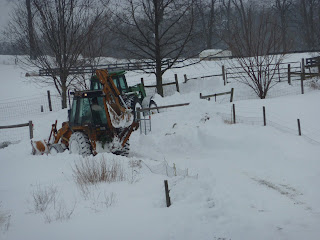 Once the main lane was cleared, Tom started in on paths to the various animals. With over two feet of snow, which had drifted much higher in places, this job was enormous. 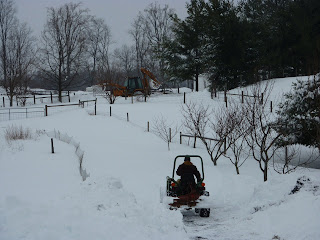 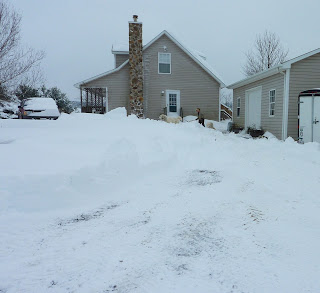 I continued to shovel, clearing the porches and paths, and working my way to the greenhouses. 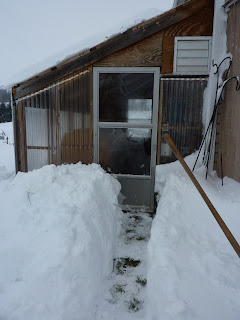 Upon finally reaching the door to the “house greenhouse”, I attempted to open it. It stuck. I tried again. I may have tried a third time. In that moment, my yet undiscovered superhuman strength kicked in, I pulled on the door again…and… broke it neatly in two! I pulled the hinge clear off and irreparably bent the door frame. Wow! I’m strong. Wow! That door is done-for. Wow! This is BAD! These thoughts were followed by a few choice words… although, I did make it inside and check on my seedlings.

We use storm doors on the greenhouses because we need light AND ventilation. The storm doors have screens in the bottoms so we can get cross-ventilation in the houses in combination with the fan units.

A trip to the Habitat store provided a “new” storm door for $10. This was in stark contrast to the one he had seen at the home improvement store for over one hundred dollars. He found the door to the other greenhouse in the Bulletin Board (think Craigslist pre-internet) for $15.00 years ago. We try to work on the budget plan around here.

The $10 door seemed a God-send. I mean… look how much money we saved! My door disaster was solved. 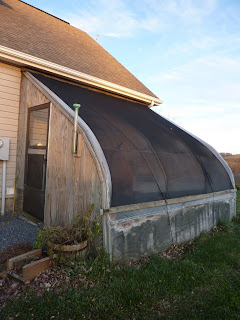 The door just never seemed quite right. It didn’t seem to close securely. Every time I opened the screen portion, something seemed a little “off”. Since it is only necessary to use the screen AND the window during the winter months and very early spring, it didn’t seem a real big deal. Although every incident with the door only served to remind me of my own stupidity. (man, I hate that!)

During the summer, I take the windowpane out entirely to get as much cool breeze flowing as is possible. The “issues” with the windowpane became a non-issue.

When winter came ‘round again, the windowpane seemed a little more cantankerous. The cycle of life and work continued; there were other things far more pressing and I learned to work around it.

Further examination of the door showed that the track was in backwards, and short of re-building the door, it could not be corrected. No wonder it had been such a problem all this time! No wonder the door had been in the $10 bin!

A trip to Lowes was planned. 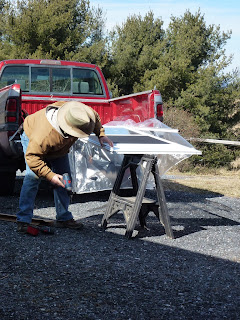 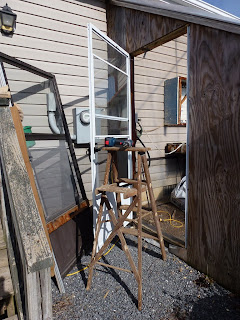 …and all is right with the greenhouse.

Leaving me to wonder….was it a case of “you get what you pay for”?

…or do I just need to learn to control those random occurrences of superhuman strength?
Posted by Barbara at 6:38 AM