His Cow is in YOUR Barn 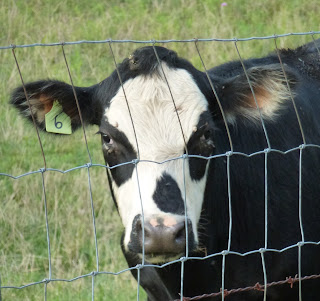 Please bear with me…I’ve got cow stories on the brain!

It was an early Spring Saturday evening several years ago and we were enjoying an episode of “All Creatures Great and Small” as a family. If you haven’t seen this show, you should, you really should. It is based on the stories of James Herriot, a Scottish vet in World War II era England. Incredible scenery, amazing stories and interesting characters make this show one of a kind.

During the show, I got up to get a glass of water and noticed that B’s new puppy was having a fit in the backyard. She was barking furiously at something, so I went to check it out.

As I neared her pen, I noticed a strange young man walking up the cow path. I didn’t recognize him, but he was wearing the “official county farmer outfit”, and his ball cap indicated he was local, so I figured he was harmless and I should probably know who he was.

“Uh…can I help you?” He looked up when I spoke…nope, didn’t recognize him. He started to say something when I heard a commotion from the barn.

“HEY! BARBARA! HEY!” A voice was coming from the barnyard, where some other man was standing on tip-toes waving his fingers at me. “His cow is in your barn!” My brain wasn’t grasping this one…and WHO was that shirtless guy in my barnyard? As I walked closer, I recognized Mr. A-I and realized the “shirtless guy” was one of the M’brook neighbors. I still didn’t know the young guy, but I knew the whole story was coming if I was willing to wait. I learned a LONG time ago…you can’t rush these things.

“G”, the cow guy, was weaning calves. He had been taking the calves to another location, but his cows (the mamas) were right behind Popsie’s house down in town. Apparently one Mama-Cow did NOT like the arrangement. Somehow she got loose (it was assumed she JUMPED the fence) and was walking/running down M’brook Road, looking for her calf. Mr. A-I was on his way home from somewhere south of the village and rather than make hamburger out of Mama-Cow with his truck, he parked on the roadside and started running after her.

The shirtless neighbor was out in his yard watching the proceedings and he knew that our cows had been grazing the field between town and our farm…and thus, we MUST have a gate somewhere, so they ran Mama-Cow up the hill, opened the gate…and she ran inside our barn.

…and that’s when I came outside, unfortunately having missed the show up to this point.

“G” was trying to figure out how to get his trailer in and load up Mama-Cow. He wanted to know what I thought…

While I went inside to apprise the family of the amazing situation, Popsie had driven up the hill. Never one to miss out on the action; he ambled over to give his assessment of the situation. A short discussion ensued, involving many opinions and much hilarity. The Boss and I were thankful that our own cows were grazing elsewhere and didn’t wander in to “help”.

“G” backed the trailer to the barn. Everyone else, eager to say they helped, stood on the sides of the door, in an attempt to get Mama-Cow on the trailer. “Shirtless” said to the girls….”now, girls…if that old cow comes at ya…just punch her in the nose! HAHAHAHA!”

Mama-Cow got on the trailer, “G” drove away, Popsie headed to his truck, Mr. A-I and “Shirtless” wandered back to the village. The big excitement was over. It was now a forgotten episode in M’brook history.

Well, that’s what I thought.

Months later when it came time for the county fair, I was standing in the show lamb barn, assisting A in settling her lambs for the night when a young family walked by. I greeted them in the usual fashion, and was surprised when they stopped and the dad said, “Chase any cows into your barn lately? HAHAHA!” There was “G”, still trying to live down the fact that his cow went gallivanting through the village and ended up in our barn! His wife and children had apparently heard the story and were laughing along with him.

We’re still getting’ a laugh from…