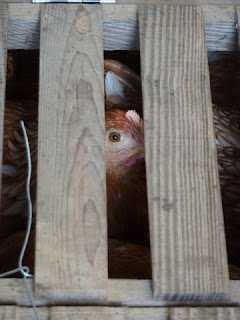 Last week, we took a trip to H’burg to pick up some “ready-to-lay” pullets. This was the final attempt to correct a long-standing egg production problem.

The old hens haven’t been laying well since winter. This is not because we haven’t tried to improve the situation. We changed housing location and feed. We tried every natural remedy we could. We threatened their lives repeatedly. The last resort was to replace the whole bunch with new birds and begin again.

The new pullets came from a hatchery in H’burg. Generally, we raise our own, but we didn’t want to wait the 18 to 22 weeks it takes for a chick to grow to the point where she can lay eggs. The new girls were supposed to be 17 ½ weeks when we picked them up. That means egg production should begin in the very near future.

The trip to pick them up was uneventful. The picking up/purchase of them was uneventful…once the proprietor remembered who we were. (that was a little unsettling) The ride home and settling in the barn was uneventful.

We waited until nightfall to put them in with the other young hens. By working with poultry in the dark, you deal with them when they are somewhat sleepy and much calmer. We clipped a wing on each bird (that keeps them from flying) and put them in the mobile henhouse. Okay, girls….grow up and lay some eggs!

The next morning, the adjustment began. You have heard the term pecking order, no doubt. That refers to how those of higher status pick on those of lower status in order to maintain their own standing. The way this plays out in the chicken yard is like this….pullet eats hen’s food…PECK! Pullet looks at hen….PECK! Pullet walks past hen….PECK! Pullet just exists…PECK! PECK! PECK! Well, you get the idea. Each time a pullet is pecked a loud shriek follows. (that’s the pullet complaining) 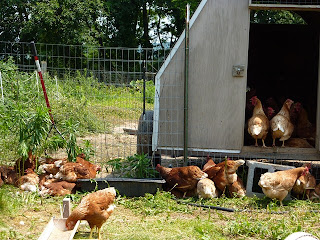 The amount of pecking and shrieking that went on was unbelievable. By nightfall, things had calmed down somewhat. The pullets found safety and comfort far away from the hens. They chose to bed down for the night UNDER the henhouse!

Out into the dark we went. Tom got his big net, and I worked on grabbing chickens. After some hassling around, they were all secured for the night. The henhouse moved to a location where the pullets could not get under it.

The following day, the pecking began again. It did not have the same intensity as before. But, the pullets were still not “allowed” to eat along with the hens. PECK! Occasionally, a pullet would be minding her own business and some cranky hen would just walk up and PECK! I suppose this was to keep the new girls in line. 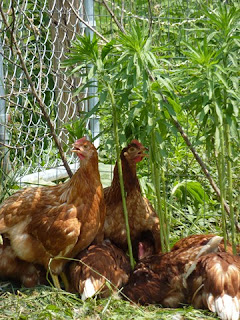