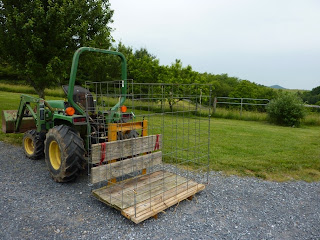 For the maiden voyage of the “king cutter carry all”, Tom planned to take Waylon and his “paddock buddy” back to the ram pen for the summer.

Unless you’ve ever tried to lead a lamb that hasn’t been halter broke, you cannot appreciate the sheer awfulness of the job. The lamb flings about, jumps STRAIGHT up in the air, crashes down, shrieks with panic, and then lies down in preparation for its impending demise. Oh, it is one of the fun jobs on the farm. NOT! The only time the job is worse is when it is a full-grown ram that is being transported from point A to point B.

Since the sheep, particularly the rams, are so infrequently handled, it makes no real sense to halter break them. Most times, in order to move the entire flock, we only need to shake a feed bucket. They all know the bucket, and will follow it anywhere.

When handling one or two sheep, that flocking instinct doesn’t work. It’s as if they realize that being alone is not a good thing, and they freak out. While herding dogs are a wonderful option for some, this isn’t a consideration around here. We have enough projects going. 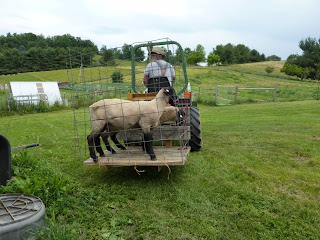 So, we generally halter the sheep and push, pull, cajole and drag it to the new location. Definitely NOT a fun proposition; someone always ends up cussing. 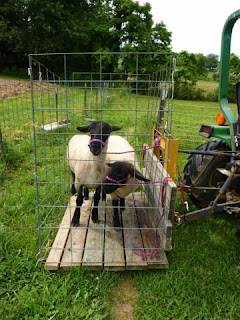 Enter the “king cutter carry all”. After some modifications this morning, we were able to load Waylon and his friend in the little pen and haul them out back. No muss, no fuss…and Tom entertained himself by coming up with a new version of the Beverly Hillbillies song while he drove. 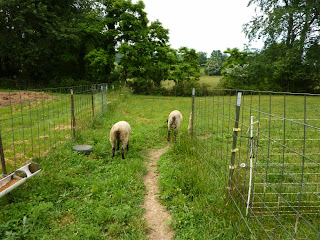 Another job checked off the “to-do” list. Waylon is in his new home until mid-August when he moves in with the girls. We won’t need the hauler at that point; we’ll just open the gate…natural instinct will do the rest!
Posted by Barbara at 10:52 AM