It’s that time of year…time to chop the thistles in the sheep paddocks. 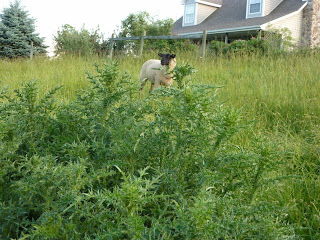 Thistles seem to pop up overnight this time of year, ready to flower and cast their fluffy little seedpods to the wind. If this is allowed to happen, the seeds will float away and perpetuate the nuisance in countless places. Without resorting to herbicide use, we try to chop them down prior to flower. Although, there are always a few that escape our efforts. 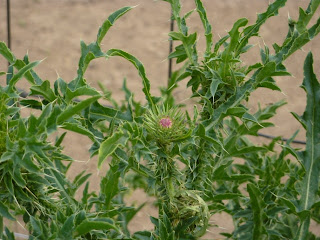 Thistles always remind me of my paternal grandfather, “Pop”. He was born to a farmer on the Eastern Shore in 1904. Born in a day prior to herbicide use, he and his two brothers were given the job of thistle eradication. I suppose they were given the job to be productive around the farm as well as to release some of the energy that only little boys seem to possess. Chopping the thistles turned into a game, and they referred to it as “slaying the Philistines”. I don’t know if this had some deep theological meaning, or if they were just playing. More than likely it was a game, not unlike “cowboys and Indians”. But, just like the story of David and Goliath from the Bible, these little boys took on the overwhelming task and won. The best part is that they had a good time doing it, and years later remembered the annual task with fondness.

Despite the fact that “Pop” eventually left the farm and raised his own family in the city, he never forgot his farm roots. He maintained a farm of his own outside of town for years, retreating to work in his garden when the pressures of city life began to get to him. After retiring, he managed to have a garden in his community until the time of his passing at 85. I suppose I owe some of my fondness for this way of life to him.

As a child, I loved to hear the stories of the old days. As I recall, the thistle story was told to us one summer when we were very, very tired of weeding...perhaps in hopes of inspiring us to continue our job. The tales that my grandparents and others told of farm life “back in the day” made a big impression. Their stories always included hard work and a love of productivity. It gives me a sense of connection even now to think that I am doing the same kind of work that folks have done for years and years. 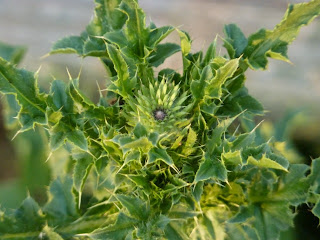 So with a nod to my forebears, I need to grab my hoe and slay me some Philistines!
Posted by Barbara at 6:06 AM