Last week we had a lot of rain. (is it me, or are a whole lot of posts starting out this way?)

Tom decided that since it was too wet to work in the gardens, he would repair the gate out back. Okay, he was probably also tired of my whining about it. The gate was becoming a constant topic of conversation.

Back in October 2009, “DUDE” the ram, took out the fence. You could read “when rams are bored” for details and a picture. Some repairs were made at the time, with the hope of getting it fixed “right” sometime in the future.. 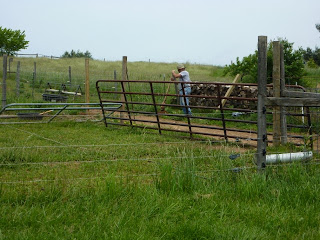 In the time since, the gate dividing the feed area from the rest of the paddocks has only deteoriated. As part of the original equipment around here, it has had a hard life. Once part of a pig pen, it was cut to accommodate something. The cut allowed bees to get inside of it during the summers, so one had to be somewhat cautious in hand placement during operation. Years of use and abuse had led to rust and that led to difficult operation. 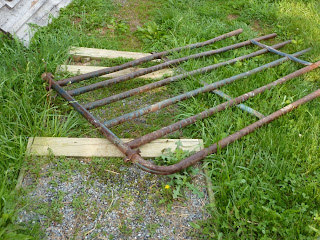 So, after a trip to Lowe’s and a bunch of work, I have a new gate. 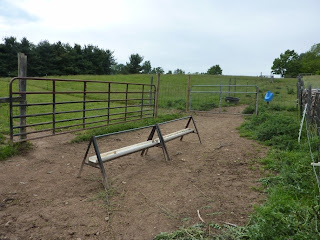 I don’t really know why Tom insists it’s MINE. But, here it is….and it works great! 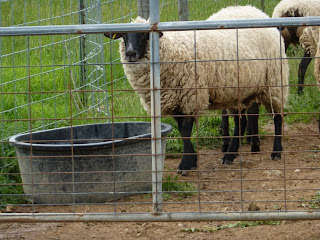 (although, it doesn't look like "Ethel" appreciates it!)
Posted by Barbara at 4:29 PM