Well, the old-time, local shepherds say “YO”…and the fact that I say “you” betrays me every time.  They can instantly tell that I haven’t always raised sheep and that I "ain't from around here”. (I know, one of them told me)  But, when I try to remember to say “YO” I end up with something like "you-yo" or at best "y-yo".  Since that sounds really stupid, I just let them know I’m not a long-time, native shepherd.

Blondie, on the other hand, has been a shepherdess since she was just a sprout.  But, she pronounces it “you”, too.  (I guess I corrupted her in her youth)  When she met her first lamb, she was hooked. she won!  I think at that point she thought she’d always have sheep.

She took over the feeding duties, she raised bottle lambs, and she learned to shear.  Then, she discovered the show ring.  She competed, she learned, she practiced…

She won! (a number of times) 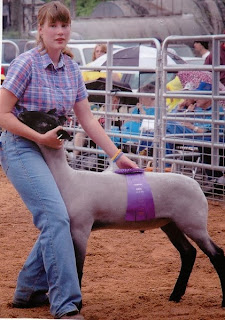 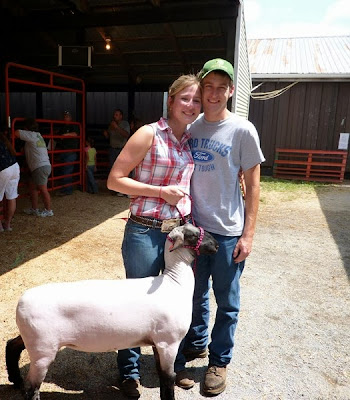 When Blondie met T-bone, she was nearing the end of her lamb-show career.  They got a couple of sheep after they got married and had their own place, but it wasn’t quite the same.  After careful consideration, they decided to sell the ewes and lambs and get out of shepherding all together.    They’re too busy with other stuff.  Check this out.  https://www.facebook.com/pages/Country-Rhodes-Produce-and-Amandas-FamousGranola-Bars/100105200066781

Since we were in the market for a few replacements, I decided to buy the ewes and get a little new blood around here.  (the lambs are from our ram, so I really didn’t want them) Blondie brought the whole crew over here, and then the Boss helped her drop the lambs at the stockyard.  (where they brought a pretty penny, I might add)

So…here are the new girls. 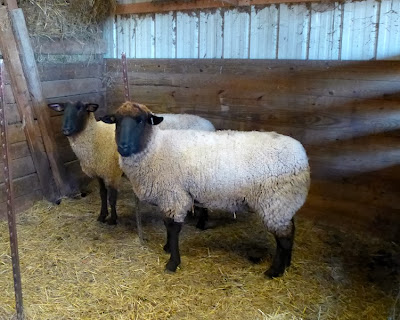 The breeders all get names…and I was thinking of something that would go together.  I wanted to name them Thelma and Louise.  That would be amusing.  Then, I decided that naming them for “outlaw women” might not be a good idea.  They might become “outlaw sheep” and Mbrook doesn’t need any more animals giving the place character and atmosphere!  Neither do I, for that matter.

After thinking about sheep names for far too long…I came up with Madge and Yolanda.  Like how I did that?  …a ewe (don’t forget to pronounce it YO) named YO-landa.  Clever, huh?


Now that I’m done cracking myself up…it’s time to note that the new girls are beginning to fit in with the rest of the flock.

...and I have a couple more reasons to look forward to next year’s lamb chop crop. 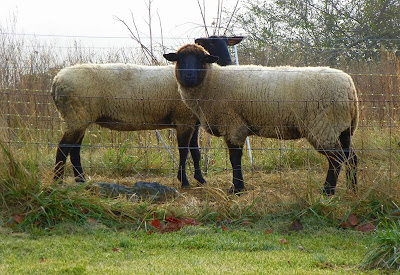