The Half Hour Job 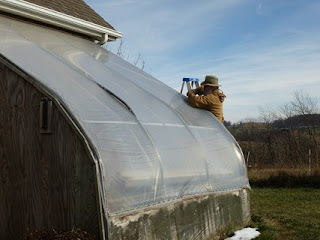 "This will only take a half hour."

Can you say famous last words?

The boss is known for his supposedly quick jobs. He is notoriously overly optimistic. Our grown daughters still roll their eyes when they hear him utter the phrase. It has become an ongoing family joke.

So, when we were facing a greenhouse repair job, I just laughed and rolled my eyes when he uttered the infamous phrase. Oh, he wasn’t bothered.  He thinks it’s funny.  As a matter of fact, I think he says it just for effect sometimes.

Despite the fact that the Boss noticed the need for greenhouse repair sometime in December and I
did a little freaking out about it New Years, (Read this)we could do nothing to rectify the situation until the weather began to cooperate a little. We needed a warm(ish), calm(ish), precipitation-free day.

Since the project was only going to take a half an hour…we planned to do the job after lunch when the temperature had risen and the grass was dry. 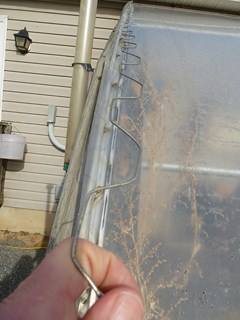 As the Boss got everything set up, I began to remove the “wiggle-wire”.  This wire fits in a little track that holds the plastic to the frame. It makes application fairly simple AND provides some tension to the plastic skin.  The tension keeps the plastic from flapping in the breeze that causes undue wear and tear. When the plastic was removed, another repair job became evident.  Those screws are supposed to be attached to the frame of the greenhouse.  Hmmm, maybe that is how mice get into the greenhouse. 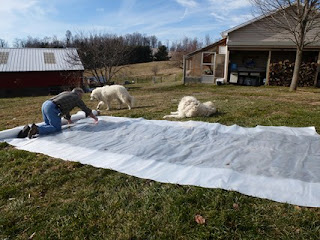 With the minor repair job completed, the big roll of plastic was measured and cut.  The entire farm team…farmers, cats and dogs were somehow involved in this project.  …and they say it’s hard to find good help… 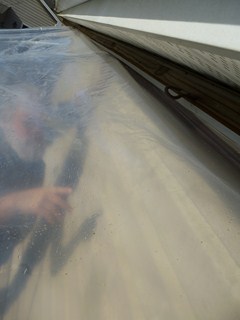 The application portion of the task went off without a hitch.  Well, the wind did start to blow just as we raised the big sheet of plastic to the top of the greenhouse.  That’s just Murphy’s Law. 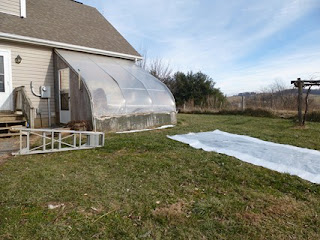 There was this big piece of “scrap” plastic.  “…and what do I do with this?”

I held up one end, wondering how I was supposed to get it in the trashcan. 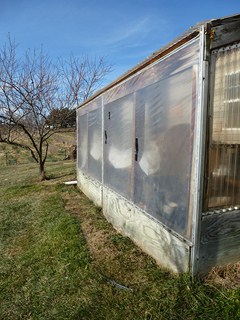 We were re-skinning the other greenhouse.  Last winter’s icicles had put a little unexpected ventilation in that one, and gorilla tape wasn’t going to work forever. 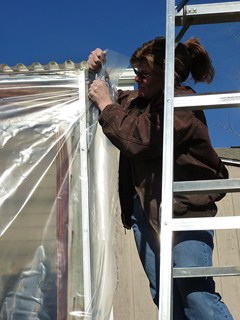 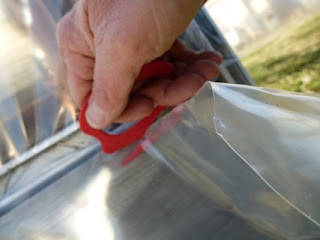 Some measuring, a little cutting and pulling and the shop-greenhouse is done, too! 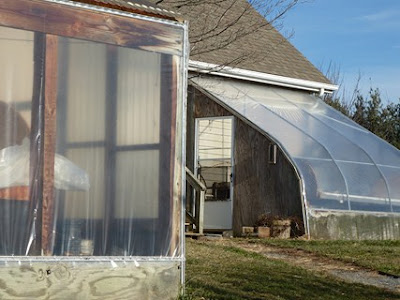 While it took longer than a half an hour (but, then it always does) we are set for another season in the greenhouses.